Alonso to race for Ferrari in 2010

Ferrari is all set to confirm Fernando Alonso as one of its drivers for next season at this weekend’s Japanese grand prix. 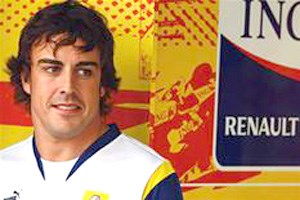 Ferrari is set to confirm Fernando Alonso as one of its drivers for next season at this weekend’s Japanese grand prix.

The two-time Formula One world champion has been tipped to join Ferrari from Renault and the deal is now all but confirmed according to Maranello boss Stefano Domenicali. He said: “I think that as soon as we are ready we will let you know. We don't want to wait too long."

Kimi Raikkonen's lawyers are finalising a deal with Ferrari to release the 2007 world champion from his contract a year early and Alonso is expected to be confirmed when this deal is announced.

Renault's stand-in managing director Jean-Francois Caubet said it would be sad to see the Spaniard leave having won the title twice with the French team in 2005 and 2006. "I think Fernando will miss Renault and Renault will miss Fernando,” he said. Renault is expected to confirm Robert Kubica when Alonso’s move to Ferrari goes through.

Meanwhile, Domenicali hasn’t completely ruled out Brazilian Felipe Massa making an unexpected return to action this year.When asked if Massa had a chance of racing this year, he said: “It is too early to say that. We need to see it step-by-step, and we don't have to anticipate anything.

"He will be back 100 percent but there is no need to anticipate anything if there is something that is not ready."I don't want to exclude anything, but we need to be cautious."