Pissay will be riding for the Sherco TVS Rally Factory Team and is the first Indian female racer to participate in a Baja World Rally event. 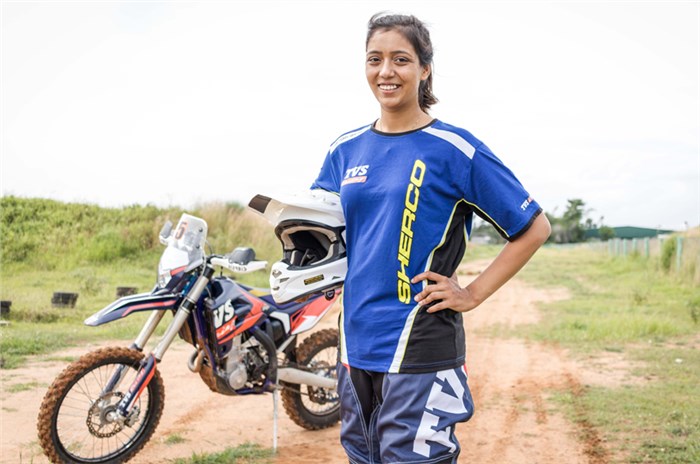 In a big boost to female racers in Indian motorsport, the Sherco TVS Rally Factory Team announced that Aishwarya Pissay will be representing them at the Baja Aragon 2018. Pissay becomes the first Indian female racer to participate in a Baja World Rally event. She will be part of a four-rider squad, which consists of French brother-duo Adrien Metge and Michael Metge, along with Spanish rider Lorenzo Santolino. The Baja Aragon 2018 will be held between July 20 and 22, and it will start off from Teruel, Spain. All the riders will be competing on the Sherco TVS Rally Factory Team’s Dakar race bike, the RTR 450.

On being the first Indian female racer to compete in a world rally event, Aishwarya Pissay, Factory Racer, TVS Racing, said, “This will be my first international Rally and I am overwhelmed as well as grateful to TVS Racing for giving me this opportunity. The Baja Aragon is a good training ground for any racer who has their sights set on the Dakar, as it tests their mettle among international talent. I am excited to race alongside experienced International Champions from the Sherco TVS Rally Factory Team. The prospect of finally experiencing the RTR 450 is daunting but I look forward to packing time on the motorcycle and perfecting my technique. “

Based in Bangalore, 22-year-old Aishwarya Pissay is among the best-known female racers in India. She has been competing in off-road and race track events for the past few years. Pissay has won the 2017 Raid De Himalaya, 2017 Dakshin Dare, and also the TVS Apache Ladies One Make Championship, last year. Michael Metge will be making his debut for the Sherco TVS Rally Factory Team at the Baja Aragon 2018.

The Baja Aragon is among the oldest running Cross-Country rally held in Europe and participants will be covering 827km through tough and challenging terrain.