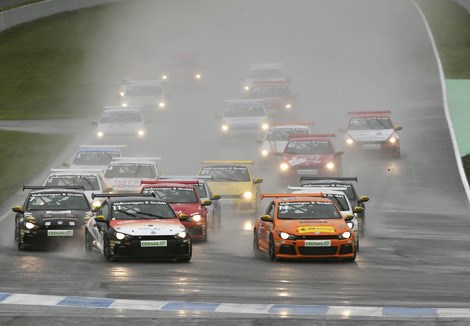 Indian driver Aditya Patel recorded his first win in the 2011 season of the VW-Scirocco R cup clinching the top spot in race two of round seven held at Oschersleben. After a disappointing qualifying session, Aditya started race 1 from seventh on the grid and fought a hard battle with Turkish driver Berke Bayindir before being passed by Guest driver Daniel La Rosa and championship rival Daniel Lloyd with just three laps to go. However, as Aditya's luck would have it, an eighth place finish put him on pole for Sunday's race under the reversed grid rule.

Although not very satisfied with his pace on Saturday's race, the Chennai lad was confident that Sunday would be a different story. Come afternoon the heavens opened up right before race 2, but did little to dampen his spirits. With Berke along side him in second and Lloyd behind him in third, fireworks were expected heading into turn one! Patel, after a fairly good start maintained his advantage till turn three where Lloyd made a brilliant pass to take the lead but Aditya managed to reassert himself even before the pair crossed the line for the first time.

However, with four laps to go - Lloyd made his move again, making it stick this time with Ola Nillson following his lead. Two corners later, the two drivers came together, handing the lead back to Aditya who then fought door to door with Junior driver, Moritz Ostereich. Aditya managed to keep Ostereich at bay to take the chequered flag, the duo separated by a smidge over two-tenths at the line.

"It was a nail-biting race. I can't remember the last time I fought for the lead like that. Moritz drove fair and brilliantly as well. I have to admit, there was a lot of luck involved too. Ola and Lloyd had an unfortunate incident which went in my favour. Anyway, I guess that's racing! Now, with one race to go, my aim is to finish in the top three in the championship", said an