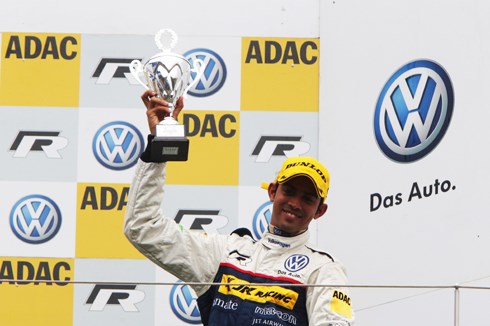 Indian driver Aditya Patel secured his first podium finish at fifth round of the Volkswagen Scirocco-R held at Nurburging.

A tough start to the weekend saw the Chennai lad a disappointing seventh in free practice. However, he managed to claw back the pace with his quest ending in P2 on the starting grid for the race.

Unpredictability of weather at the Eifel throughout the weekend made the task extremely difficult for drivers, with the heavens opening up merely an hour before race start. A call for wet-weather tyres was thus made, but the track had turned bone-dry by the time lights went out.

Starting on the outside of the front row, Patel managed to jump championship leader Mateausz Lisowski for the lead on the exit of turn one. For seven laps after, the Indian held on to his lead before swapping places with the Pole a few times with the latter coming out on top. With all the drama in front, Brit Daniel Lloyd managed to close up in third and was tailing the Indian by lap ten. The next five laps saw a fierce battle between the two and it was only the last lap where Lloyd managed to pull a quick one Patel by using his push-to-pass system where he least expected. Nevertheless, it was a hard fought race by all drivers and was a spectacle of high quality racing for the audiences all around the world.

After the race Aditya said, "It wasn't an easy race at all. Changing conditions meant we were sent out on wet tyres in the dry but unfortunately I overheated my tyres way too fast! Good tyre management by the other two drivers was the key here. Well, there's a lot that can be learned from this weekend. I'm happy to be on the podium and hope to continue with a few more to come! I wouldn't be racing here without the support from my sponsors, JK tyres, Amante, Jet Airways and Virtu Technologies."