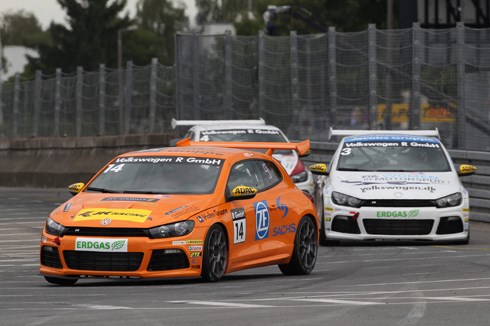 The fourth round of the VW Scirocco Cup 2011 saw Indian youngster Aditya Patel emerge from a tough weekend to finish fifth. The 2.3-km Norisring street circuit, also known as the German Monaco provided the setting for the battle and things started on a good note for the Chennai driver as he ended the free practice session in second, only bested by Dutch LeMans and F1 legend Jan Lammers.

The short circuit meant that times were incredibly close, and a few tenths could mean the difference between first and tenth. The top 20 cars were covered by a second in qualifying, and Aditya’s time of 1:00.887, less than four-tenths off pole sitter Swede Ola Nilsson, was only good for seventh on the grid.

The other Indian driver on the grid, rookie Sailesh Bolisetti who was over a second off pace found himself way back in 22nd.

Come raceday, the top seven on the grid were also the top seven championship contenders. Aditya managed to nail the start, catapulting from seventh to fourth before the pack reached turn one. An incident involving American racer James Mobley brought out the safety car for two laps and once the track went green again, Aditya held onto his fourth place into turn one. A few laps later, the Lausitzring winner, Daniel Lloyd managed to reel in Patel's car and with four laps to go, the duo went hammer and tongs with Lloyd scything past the Indian before the finish.

Post-race, Aditya said, "I managed to get a dream start, almost and gained quite a few places by turn one. Being a street circuit, this was exactly what I needed! All in all, it was a decent weekend and the top seven drivers are still very close. Nurburgring is next on the calender and is one of my favourite tracks! I'd like to thank my sponsors JK Tyres, Amante, Jet Airways and Virtu Technologies for their continual support."

Sailesh also managed to fight his way up the grid, finishing 17th after starting 22nd.