Alonso’s #23 United Ligier dropped out of contention for a potential podium place after suffering brake issues. 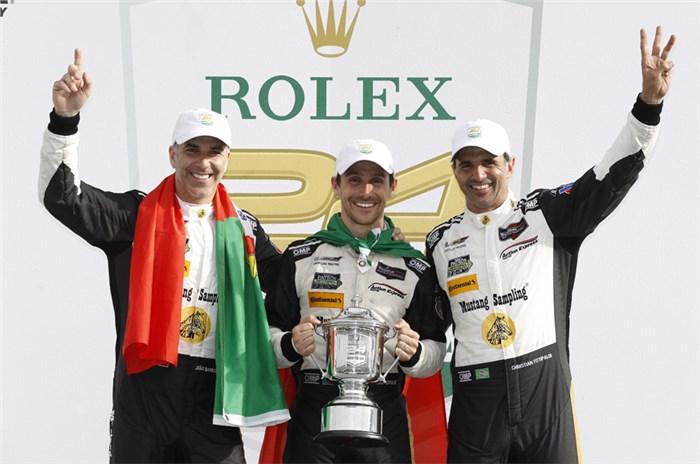 Action Express Racing took victory in the 56th edition of the Daytona 24 Hours, establishing a new distance record in the process. Filipe Albuquerque, Christian Fittipaldi and Joao Barbosa completed a total of 808 laps in the #5 Cadillac DPi-V.R, beating the previous record of 762 laps on the current track layout in 1992 and the mileage record established in 1982 on the previous 3.84-mile (6.17Km) configuration.

The Prototype race was marked by a high number of casualties among the leading runners, including the Spirit of Daytona Racing (misfire) and Wayne Taylor Racing (spate of right-rear punctures).

Both Extreme Speed Motorsport Nissan DPis also dropped out in the night with a gearbox failure and a blown turbo respectively. Meanwhile, a fire and a recurring electrical problem brought an end to the Joest-run Mazda’s race. That meant the race developed into a two-way contest between the two Action Express Cadillacs and Team Penske's pair of all-new Acura ARX-05s.

Penske's challenge crumbled just beyond half-distance with an alternator problem for the #6 and a trip to the garage for the #7 when Helio Castroneves made contact with the #31 Action Express Cadillac. That left Action Express with a major advantage and allowed both cars to make late stops to top up their fluids amid concerns of overheating.

The Felipe Nasr, Mike Conway, Eric Curran and Stuart Middleton car emerged from its stop in a fight for second with the CORE Autosport Oreca of Colin Braun, Jon Bennett, Romain Dumas and Loic Duval. Braun closed on the fuel-saving Middleton in the final stint but fell short by 21 seconds, as Albuquerque took the flag first 1m10s clear.

Both teams' respective second cars, featuring current Formula 1 stars, hit trouble. Fernando Alonso’s #23 United Ligier dropped out of contention for a potential podium place in the evening with a brake issue that forced a lengthy trip to the garage to replace a master cylinder, before losing more time with a throttle issue and a repeat of the brake problem. Alonso and team-mates Lando Norris and Phil Hanson wound up 38th overall, 91 laps down.

In the #37 DCR Oreca he shared with Daniel Juncadella, Robin Frijns and Felix Rosenqvist, Lance Stroll ended up 15th overall and 32 laps down after losing a significant amount of time to repair bodywork and suspension damage after a puncture.