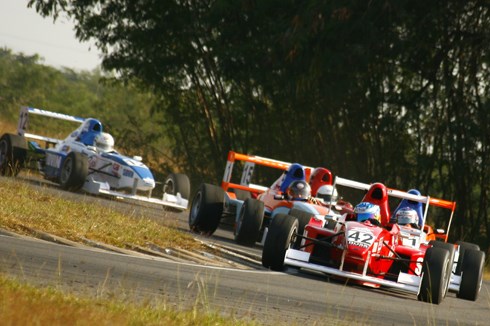 Day one of round two of the MRF Formula Championship 2011 saw close battles in the the Group D 165cc bikes, Super Saloons and the showcase F-1600 class. Briton Jordon King of Team Sidvin India continued his stellar form as he clinched pole from Finn Jukka Honkawori in qualifying- the difference merely being a few hundredths with his Gulf Oil teammate Ashwin Sundar a little more than two-tenths adrift in third place.

Jordon made good his pole advantage and got away to a clean start, with the Jukka-Ashwin pair chasing him down while being entangled in a battle of their own. Jordon, however managed to pull away while Jukka managed to keep Ashwin behind for most part of the race. The Chennai driver though repeatedly tried to pressurise the Finn into a mistake, coming close on several occasions but was unable to make it stick and had to settle for third. Alex Waters and Makela Mikka, who had started fourth and fifth managed to hold their positions till the chequered flag.

The Group D bike race was a thrilling affair, thanks to 30 bikes on the starting grid. Sitting pretty on pole position once again was Sarath Kumar of Ten10 racing with Sumit Lucas, A Prabhu and Jitesh James completing the front row. Sarath's race ended abruptly after he made contact with another rider on lap four. Following the incident, A Prabhu of Motorev-India made no mistakes enroute to the chequered flag despite close dicing with Naveen Raj and Sameer Venugopalan of Apex Racing. Sameer managed to lose the rear end in the infield on the final lap, handing the third spot to D Dinesh Kumar of MotoRev-India.

The Saloon race was expected to be a dogfight between Radha Selvraj and Siddharth Kishore- and the speculations were right on the money. Siddharth managed to outqualify Radha and as the lights went out, it turned out to be a wheel to wheel battle. Radha managed to make his way past Siddharth but was slapped with a 30-second penalty as he was stewards adjudged him to having forced Siddharth off track. As a result, he was relegated to third with Sivaramakrishnan being promoted to a second place finish with Siddharth taking the top spot.