Vettel was second ahead of the two Mercedes of Rosberg and Hamilton. 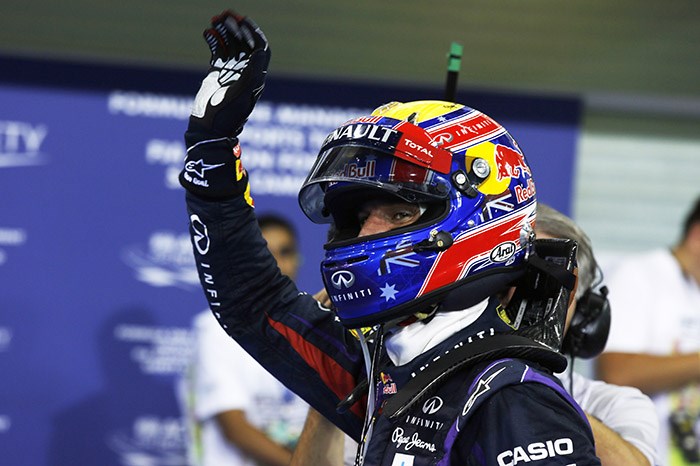 Both Lewis Hamilton and Nico Rosberg topped a qualifying segment for Mercedes before Q3, but Red Bull's pace at the crucial moment was too much, leaving the silver cars on row two.

Vettel recorded a 1m40.091s on his first run of Q3, ahead of the two Mercedes, with Webber apparently struggling.

But a great final effort helped the Australian to 1m39.957s and even a late improvement from his four-time world champion team-mate was not enough to deny Webber the top spot.

Rosberg outqualified Hamilton, who spun off on his final run, while Kimi Raikkonen was the top Lotus in fifth.

Nico Hulkenberg continued his fine form for Sauber to take sixth, ahead of Romain Grosjean's Lotus and Felipe Massa's Ferrari.

The times in Q2 were again tight and two big names fell. Ferrari's Abu Dhabi struggles continued, particularly in the final sector, and Fernando Alonso could only qualify 11th, not helped by a minor error.

A similar charge from Jenson Button also failed to get the McLaren driver into the top 10 after what the Briton described as a "very strange" loss of grip since final practice.

With the circuit getting faster and faster in Q1, the last soft-tyred runs proved crucial and it was Sauber's Esteban Gutierrez and Adrian Sutil's Force India who were the midfielders to fall.

Giedo van der Garde topped the Caterham/Marussia battle, while Jules Bianchi (20th fastest) has a five-place grid penalty after his gearbox needed changing thanks to his crash in third practice.

The results remain provisional, with several drivers apparently setting their best laps after running all four wheels over the white lines, which they had specifically been warned not to do.