The Italian rider picked up his third win of the year, closing within 10 points of championship leader Quartararo. 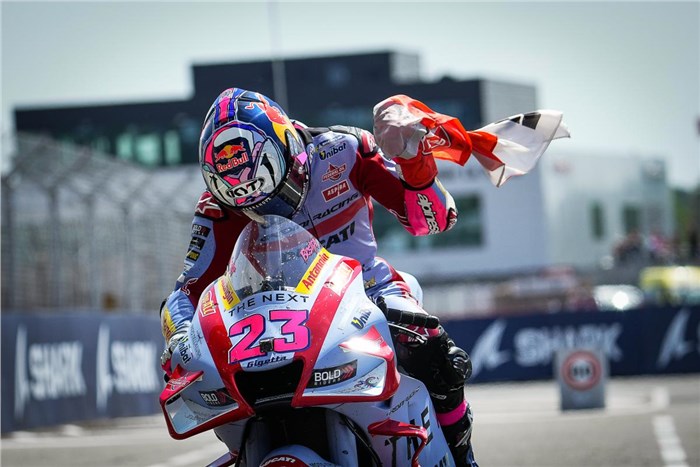 Enea Bastianini took victory at the French MotoGP round in Le Mans – a race of high attrition that saw seven riders crashing out.

Championship leader Fabio Quartararo was slated to have a strong showing at the French GP. The Frenchman came into his home race on top of the points table, at a track where Yamaha's weaknesses aren't punished quite so severely. With the support of the home crowd and a well set up M1, Quartararo laid down some impressive pace in free practice, making him the hot favourite for Sunday’s race. 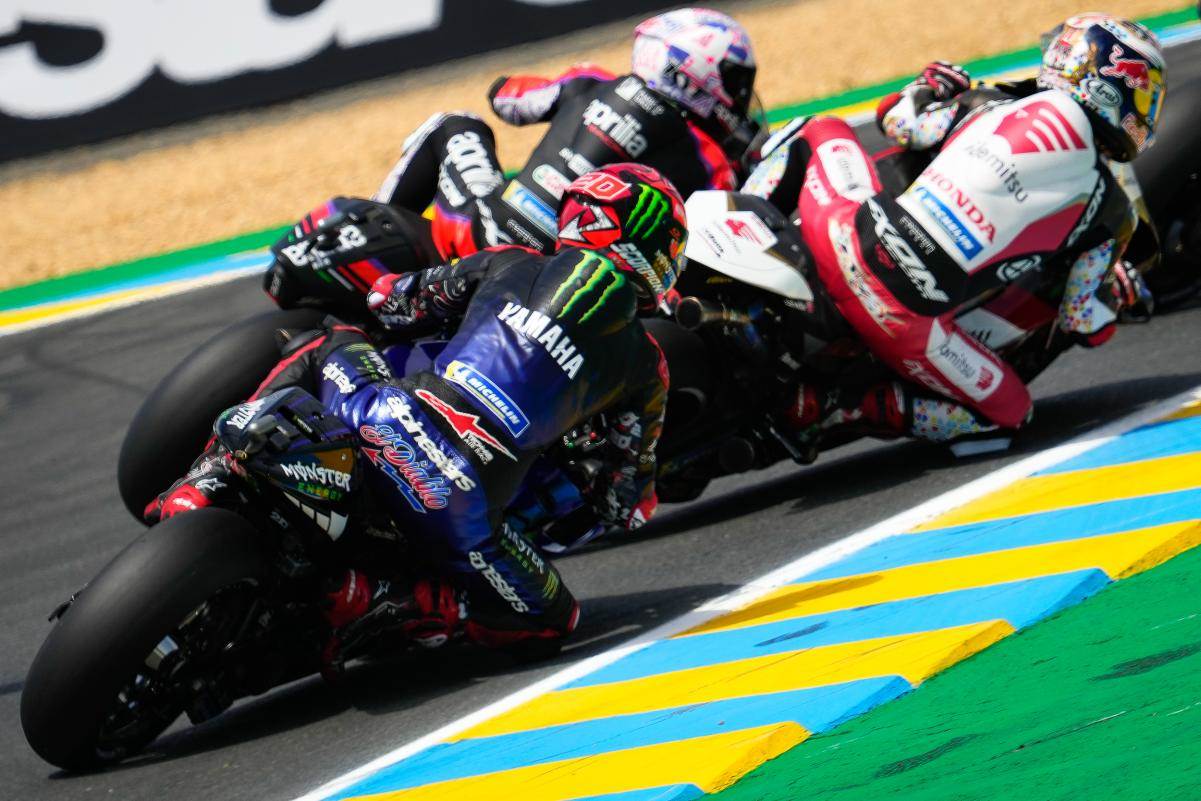 But he only managed fourth place in qualifying, and then had a bad start. It was mostly downhill from there, with the Yamaha rider being swallowed up in the first few corners and dropping as low as eighth place. He fought back from there but struggled to replicate his pace from free practice without a clear track ahead. It was predominantly the crashes ahead of him that promoted the championship leader to fourth place at the chequered flag – a slender four points ahead of Aprilia man Aleix Espargaro.

Espargaro had another strong showing at Le Mans, continuing a podium streak and picking up third spot for the third race in a row. This consistency, combined with his Argentina GP victory, sees him turning into a strong championship contender this year, equipped with a quick and capable 2022 Aprilia to back him up. 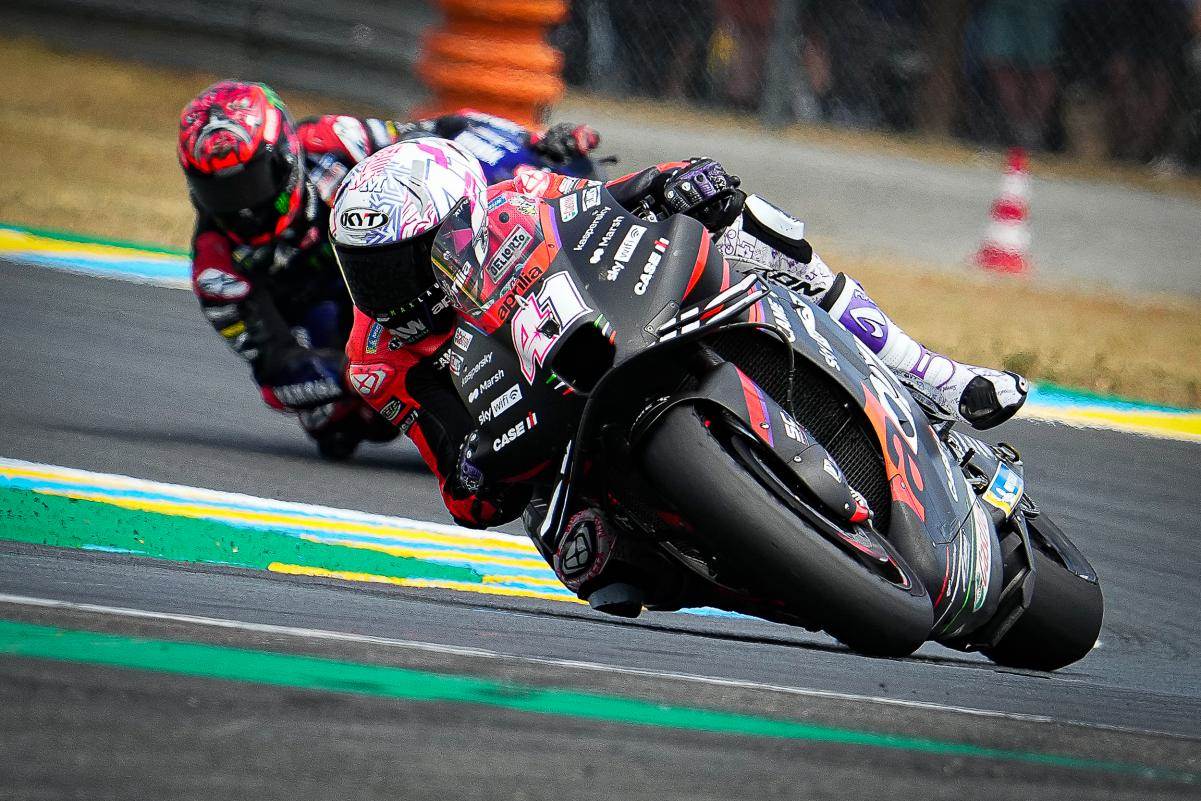 The battle at the front of the race was an eventful one, marked by a number of falls for frontrunners. Polesitter Francesco Bagnaia lost the lead to Ducati Lenovo teammate Jack Miller at the start, but reclaimed it on Lap 4 and held it for quite a while after. He seemed to be comfortable leading the race, but fellow Italian and Ducati rider Enea Bastianini had other ideas. Renowned for his ability to conserve tyre life, Bastianini came on strong in the middle of the race, first passing Miller for second place and then methodically hunting down Bagnaia in the lead.

The two Italians went head-to-head on an eventful Lap 21. Bastianini first dived up the inside and took the lead at Turn 4, the entry to the Dunlop chicane, before Bagnaia held a tighter line through La Chapelle two corners later and reclaimed the lead. But the Ducati Lenovo rider then overcooked the entry to Turn 8, braking too late and running wide off-circuit. This promoted Bastianini back into the lead, but Bagnaia had bigger problems coming. Having rejoined in second, the race for last year's championship runner up was dramatically cut short as he lost the front and crashed out at the penultimate corner on that same lap. 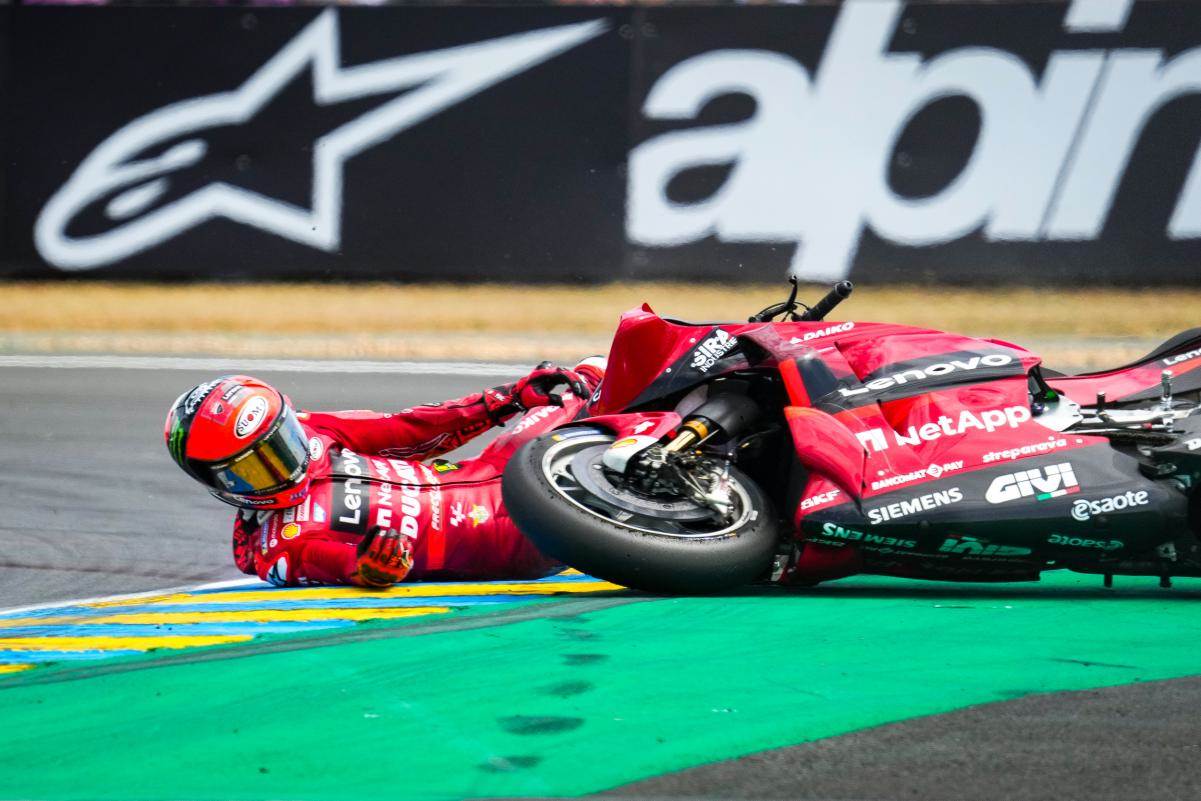 That left Bastianini to take a comfortable win, but the Italian on the year-old Gresini Ducati continued to set a blistering pace at the front of the race, taking the chequered flag nearly three seconds ahead of Miller – the man he’s tipped to replace in the factory Ducati team next year. In doing so, Bastianini closed to just eight points of the championship lead, and will be full of confidence heading into his and Ducati's home race at Mugello in two weeks' time. 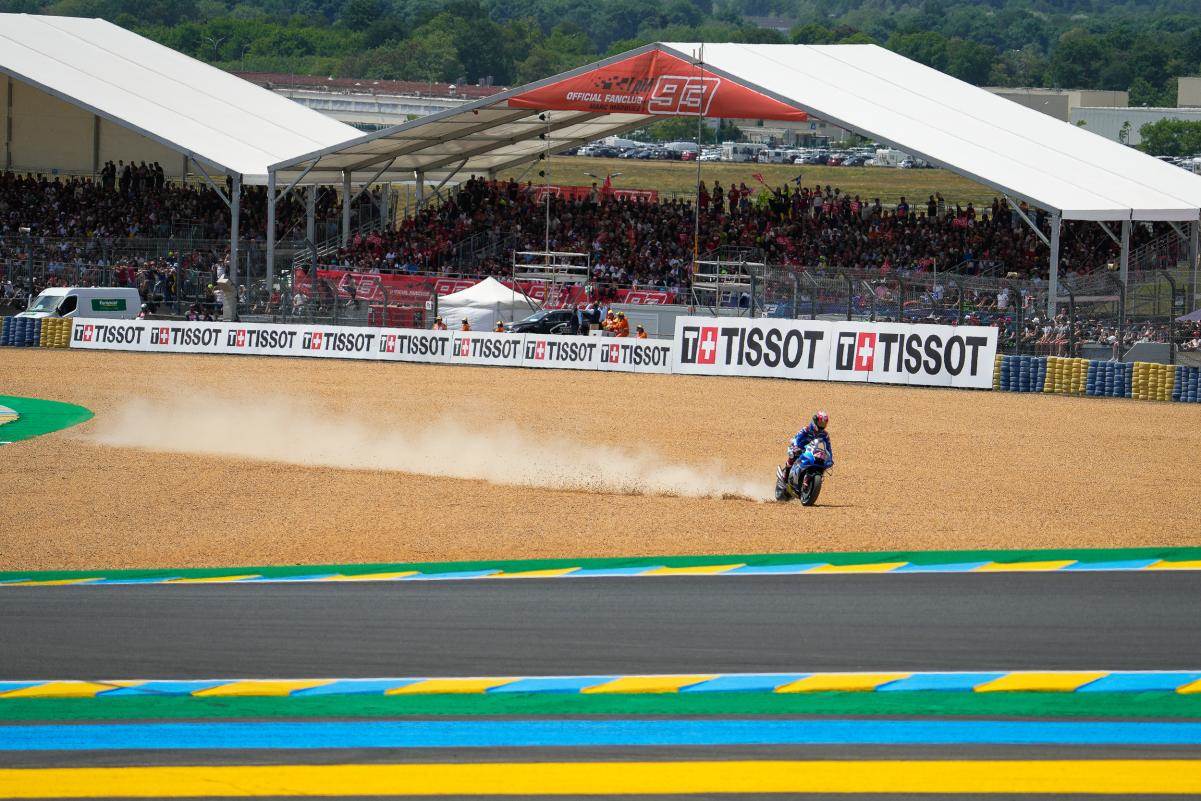 It was a disastrous Sunday at the end of a tumultuous fortnight for Suzuki – at the first race since the Japanese manufacturer announced its plans to quit MotoGP at the end of the year, both its riders crashed out of the race when looking strong and poised for a sizeable points haul. Alex Rins had the scarier of the two crashes, losing control at the frighteningly quick Turn 2 and blazing through the gravel trap at close to 300kph, before eventually being thrown off the bike on his return to the asphalt at Turn 5, and narrowly avoiding being hit by other motorcycles. Joan Mir, meanwhile, was in hot pursuit of a podium finish when he hit the deck at the penultimate corner, in a crash almost identical to Bagnaia's. 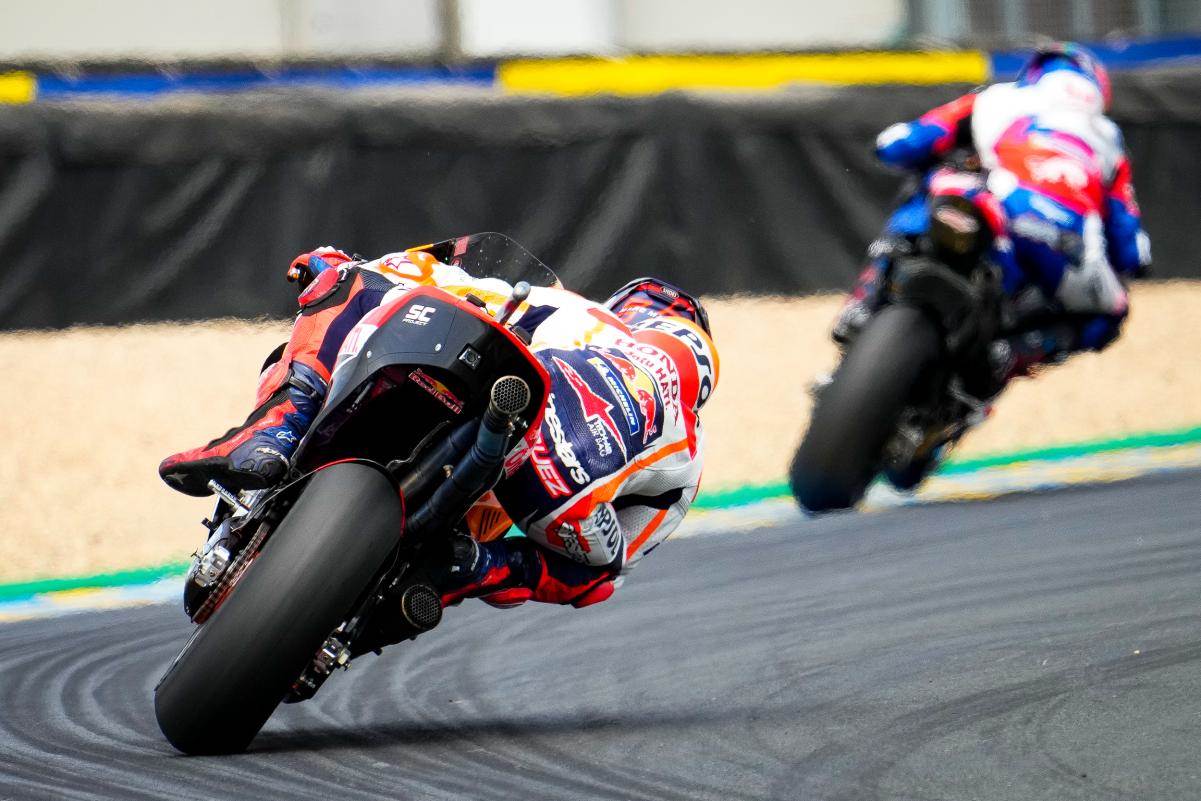 Behind all the drama, six-time MotoGP World Champion Marc Marquez struggled to a sixth place finish, as he continues his search for the ideal set-up that gives him the feeling and confidence he needs on the radically new 2022 Honda RC213V. Despite losing one of his winglets in early contact with fifth place finisher Johann Zarco, Brad Binder was KTM's top (and only) finisher, picking up eighth place. With the Austrian factory team continuing to struggle to make its RC16 competitive, and the South African consistently the leading light for the team with whom he is contracted until 2024, there is pressure on KTM to start turning things around.