Max Verstappen picked up his third win in four races ahead of Lewis Hamilton and Valtteri Bottas. 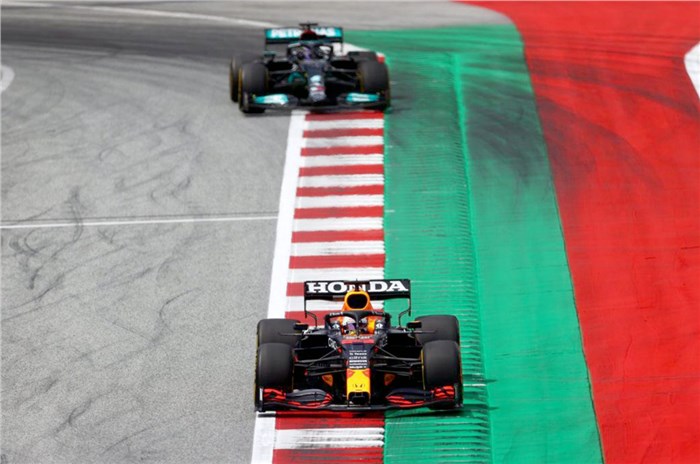 The Dutchman, who was unchallenged in his lights-to-flag romp to the chequered flag, crossed the line over 35 seconds clear of title rival Lewis Hamilton’s Mercedes, after the Briton made a late second pit stop for fresh tyres to secure the fastest lap. His Mercedes teammate Valtteri Bottas, who had qualified second but started fifth due to a three-place grid penalty, fended off the other Red Bull driver, Sergio Perez, for third.

Sunday’s win was the 14th of Verstappen’s career and third from the last four races. The 23-year-old now has four wins to Hamilton’s three putting him 18 points clear of the seven-time champion in the overall standings.

He has every chance of pulling further ahead next weekend, with the same 4.3-kilometer long, Red Bull-owned track playing host to the Austrian Grand Prix.

Red Bull are now 40 points clear of Mercedes in the constructors’ standings, with the German marque, going for a record eighth title double this year, last having faced such a long victory drought in 2013, before the turbo-hybrid era.

“The car was on fire today,” Verstappen said over the team radio on the cool down lap.

“We just kept on going, tried to hit our lap times and it worked really well today,” he added later.

Hamilton, who started alongside Verstappen on the front row after moving up due to Bottas’ penalty, had gone into the race resigned to the fact that Red Bull were faster.

But if he hoped for an opportunity to vault Verstappen at the start, it never materialised as the Dutchman comfortably led into the first corner, with the Briton left fending off the fast-starting McLaren driven by  Lando Norris instead. From then on, Hamilton had no answer.

“It was a bit of a lonely race,” said the reigning champion, who at least limited the damage by taking the point for fastest lap on the final tour.

“I was trying to keep up with these guys but the speed they have - they’ve obviously made some improvements over the last couple of races.” “Impossible to keep up,” he added.

Bottas was simply relieved to be back on the podium, his first since the Spanish Grand Prix in May, after crossing the line just half-a-second  ahead of  Perez who made to pit-stops.

“It’s been a while that I’ve been on the podium,” said the Finn. “It was getting pretty close at the end and there was not much margin.”

Behind the top-four, McLaren’s Norris, who had run as high as third in the early stages, took fifth.

Spaniard Carlos Sainz led a strong recovery for Ferrari in sixth ahead of teammate Charles Leclerc. The Monegasque, voted ‘Driver of the Day’ by fans, had a scrappy start and needed to pit on the opening lap for a new front wing after contact with AlphaTauri’s Pierre Gasly.

Lance Stroll was eighth for Aston Martin ahead of double world champion Fernando Alonso in the Alpine. AlphaTauri rookie Yuki Tsunoda rounded out the top-10.