2019 Shell Eco-marathon Asia to be held in Kuala Lumpur

The Asian leg of this year’s Shell Eco-marathon will be held at the Sepang International Circuit in Kuala Lumpur, Malaysia. The Indian contingent will consist of six teams. 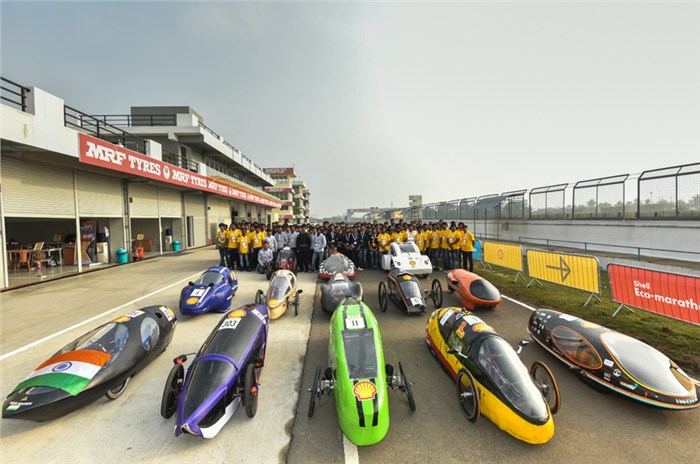 Energy major Shell has announced that the Asian leg of its Shell Eco-marathon (SEM) will be held in Kuala Lumpur, Malaysia this year. The Asian leg will finally return to Malaysia, where it first started back in 2010. The event will be held from April 29 to May 2, 2019, at the Sepang International Circuit.

A brief introduction for those who do not know, the Shell Eco-marathon (part of Shell’s ‘Make The Future’ initiative) is an event where engineering institutions compete to design and build ultra-energy-efficient cars. These cars are then tested out on the track and the teams compete for the spot of the most-efficient car.

The cars that the teams build fall under two main classes – UrbanConcept and Prototype. The UrbanConcept category consists of cars that are geared towards passenger comfort and have to have four wheels. The Prototype category consists of cars that prioritise efficiency maximisation over passenger comfort and usually have three wheels. There is an additional division for energy categories in the two classes, which comprises Internal Combustion Engine (petrol, diesel, ethanol), Battery-Electric and Hydrogen Fuel Cell.

There are over 100 teams from all over Asia and the Middle East that will be competing at the 2019 Shell Eco-marathon. India will be represented by six teams, from prestigious institutions across the country. Out of the six teams, five teams will be showcasing their battery electric prototypes. Here’s a list of the Indian teams and the cars they’re entering.

The nine-member, all-women team from Delhi will be competing in SEM for the first time. They are building a car to compete in the Prototype – Battery Electric category and is expected to have a range of 300km when fully charged. The car features a carbon-fibre shell and uses a detachable aluminium front section for easier transportation. Power comes from a 48V 20 AH lithium-ion Battery. The team has named its car 'Iris'.

Team Eco Titans is a thirty-member team. The team has participated in SEM before and this year, they are building a car for the Prototype - Internal Combustion Engine (petrol) category. The team has named its car Project Decimas and have fitted it with a carbon-fibre shell and have used aluminium for the other chassis components. Also, glass fibre composite has been used on the body for increased safety and efficiency. The car is powered by a 50cc, four-stroke engine and is fitted with a CVT transmission system with chain drive. Project Decimas is said to have an expected mileage of 200kpl on petrol.

Team Averera won the first prize for its battery electric prototype at the 2018 Shell Eco-marathon. The team will be aiming for top spot again as they are participating in the same Prototype - Battery Electric category. This year’s car, the Alterno v4.1, features a carbonfibre monocoque for additional rigidity and reduced weight. The car will be powered a 48V 3 phase BLDC Hub Motor, which combined with the lightweight monocoque is expected to provide a mileage of 400 km/kWh, though they are hoping to get close to the 550 km/kWh mark this year.

This 24-member team is based out of Gandhinagar, Gujarat and it is also building a car to compete in the Prototype - Battery Electric category. Their car for this year’s SEM will be called the Nakshatra. The team has modelled the car around a diving kingfisher to give it a low-drag coefficient body shape by a technique called bio-mimicry. The body of the car consists of a carbon-fibre shell and a chassis made from lightweight aluminium. The expected mileage for the car is over 150 km/kWh.

Bengaluru-based Team Project Garuda is the only team from India that is building a car to compete in the UrbanConcept - Battery Electric category. Interestingly, they have named their car the Mjölnir (named after the hammer of Thor, the Norse god of thunder). The group has bettered their previous effort and have managed to design and construct systems in-house that are 60-70 percent lighter than their previous prototype. Their car has a carbon-fibre body and comes fitted with a 1kWh 20Ah battery – this could mean a mileage of around 60 km/kWh.

The 10-member team from Ranchi, Jharkhand will make their debut at this year's Shell Eco-marathon. They are building a car to compete in the Prototype - Battery Electric category and it will be called the Vitvar. The car is built on an aluminium ladder-frame chassis and its body panels are made from carbon fibre, which helps keep weight low. The Vitvar uses a 48V, 750-watt BLDC electric motor and the battery is a lithium-ion battery. Its expected mileage is 150km per charge.