Andrea Dovizioso finishes just 0.023sec in front of Marquez in the opening race of the 2019 MotoGP season. 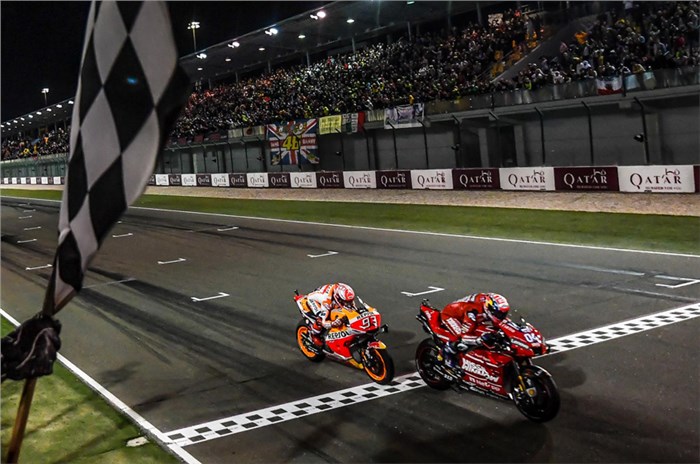 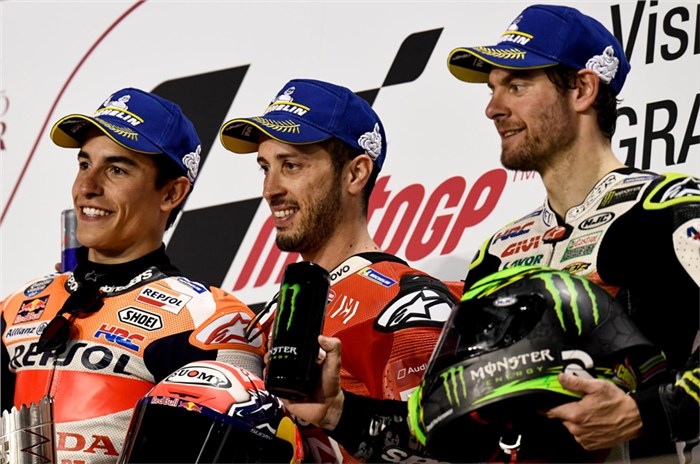 With top riders switching teams, the 2019 season was already shaping up to be quite a spectacle even before it started, and the opening round at the Losail International Circuit in Qatar served up a cracker of a race. Maverick Vinales was fastest in pre-season testing both at Valencia and Qatar, and managed to seize pole position for the Qatar GP. The front row was completed by Ducati’s Andrea Dovizioso and reigning champion Marc Marquez. Last year’s pole-sitter Johann Zarco, who moved to KTM this year from Tech 3 Yamaha, failed to repeat his performance and started way back on the grid from 21st position.

As the lights went out, Vinales lost five places and dropped down to 6th. Dovizioso moved to the front with rookie Jack Miller moving up right behind him from 4th on the grid. Miller continued to hold off Marquez and the two traded positions a couple of times on the opening lap. Unfortunately, on the second lap of the race, the Australian faced an issue with his seat and was forced to retire from what could have been a strong finish in the points.

With over 20 laps remaining, Joan Mir, who moved to Suzuki MotoGP from Moto2 for the 2019 season, was also fighting for a spot on the podium. His Suzuki Ecstar teammate, Álex Rins, had a great start to the race too. With 18 laps to go, he moved up from 10th position and was battling it out with Dovizioso and Marquez for the top spot on the podium. The 23-year-old managed to carry more speed in the corners and edge past Dovizioso, but his bike was no match for the straight line power of the Ducati and he failed to stay in front.

In the middle of the pack, Valentino Rossi was starting to display a strong performance. Despite having issues with his bike over the weekend and qualifying in 14th place, the 40-year-old was consistent and managed to finish in 5th place. Lorenzo, on the other hand, suffered a dismal season opener. The Spaniard, who moved to the Repsol Honda team alongside Marquez, suffered two crashes on Saturday and also happened to be recovering from a surgery he underwent during the pre-season break. He ultimately finished the race in 13th place, picking up three points.

Dovizioso remained in control at the front for most of the race with new teammate Danilo Petrucci, Marquez and Rins in tow. With three laps to go, Rins ran wide coming off the main straight, allowing Cal Crutchlow to move into 3rd. The last couple of laps turned out to be extremely close; a carbon copy of last year’s finish. With 2 laps to go, front-runner Dovizioso ran wide and it came as no surprise when Marquez seized this opportunity to move in front. However, he dropped back to second in the first corner of the last lap. The two ran almost side-by-side until the very last corner where Marquez moved in front, but ran slightly wide, allowing Dovizioso to take the tighter line. Much like last year’s nail-biting finish, the Italian managed to finish in front again, by a mere 0.023 seconds. Crutchlow completed the podium, clinching third place.

The second race of the season will take place in three weeks in Argentina, and while it’s too early to pick favourites at this point of time, the Qatar GP showed just how strong a number of riders are this season, with the top six finishing within 0.6sec of each other.