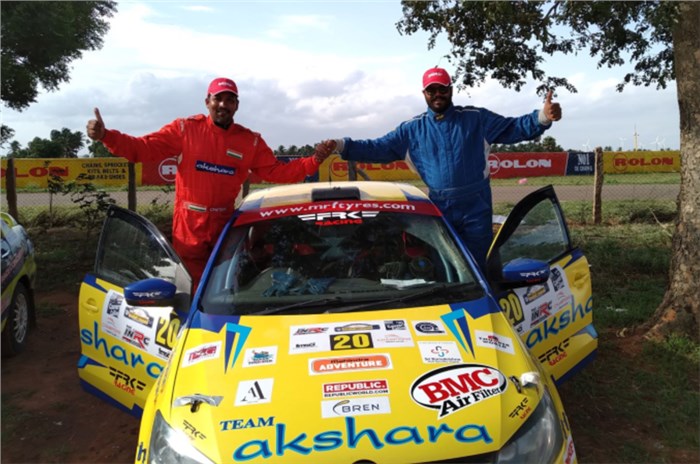 Shivram inherited the lead on the first day after Mahindra Adventure’s Gaurav Gill (co-driver Musa Sherif) was forced to pull out of the rally. Gill set the pace early on, setting the fastest time in the first three stages , but then his rally-spec Mahindra XUV300 picked up a puncture and a subsequent mechanical issue resulted in him having to retire from the rally.

Heading into the second day, Shivram held a lead of just four seconds over Suhem Kabeer (co-driver Jeeva Rathinam). However, the latter got stuck in slush in the final day’s first stage itself, losing six minutes as a result. Shivram was then under pressure from Younus Ilyas (co-driver Harish Gowda). Ilyas even managed a win a couple of stages on the final day, but Shivram ultimately gained the upper hand and took victory by a margin of just 4.6 seconds.

A time of 1 hour 33.56 seconds was enough to hand Ilyas second place overall and victory in the INRC 2 category. Meanwhile, Team Champions’ Fabid Ahmer (co-driver Sanath G) finished third overall and bagged 2nd place in INRC 3. Round 1 winner Dean Mascarenhas (co-driver Shruptha Padival) had dropped to the bottom of the standings at the end of the first day after his car got stuck in slush, but a stellar comeback drive saw him gain 32 places  to finish 2nd in the INRC 2 category and 10th overall. Meanwhile, Vaibhav Marate (co-driver Arjun SSB) took victory in the INRC 4 category for a second consecutive time.