2019 Desert Storm: Aabhishek Mishra and Adrien Metge in the lead after SS4

Aabhishek Mishra holds the lead in the Xtreme category ahead of Gaurav Gill, while Adrien Metge leads CS Santosh in the Moto category. 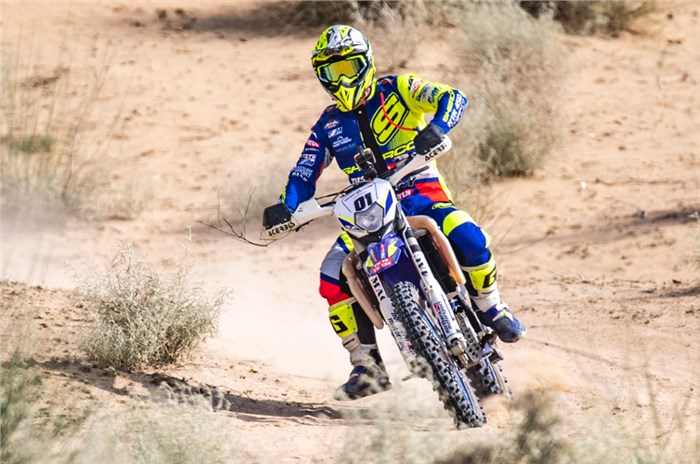 The first day included a total of three special stages for participants in the Xtreme category. Team Mahindra driver Sunny Sidhu and co-driver Ashwin Naik were in the lead after the first day, but dropped down to the middle of the pack after SS4. Reigning Desert Storm Champion Mishra was initially 2nd overall, but capitalised on overnight leader Sidhu’s misfortune to move into the lead. Gill was down in 4th place after the opening day owing to navigational errors and technical problems, but made up significant ground in SS4 to move up to 2nd place overall, just 3min behind Mishra. Meanwhile, Samrat Yadav and co-driver Kunal Kashyap are 3rd in the overall standings.

In the Moto category, competitors had to tackle two special stages on the opening day. Metge won both the stages to take an early lead in the Group A class (above 250cc) and continued to extend his advantage in SS4.

“This is my second Rally in India and I am really happy with my momentum at the start. Although the harsh weather is a big roadblock this time, I tried keeping my focus on navigation and successfully got my bike to the finish line. I hope to continue the momentum and have a podium finish,” said Metge.

A total of eight participants retired from the Moto category after Day 1, including TVS Racing’s Imran Pasha, who’s competing in the Group B class (up to 250cc). Meanwhile, four participants failed to complete the stages on the first day – Sanjay Agarwal and co-driver Smitha N’s car went up in flames not too far from the start due to heating and electrical issues.