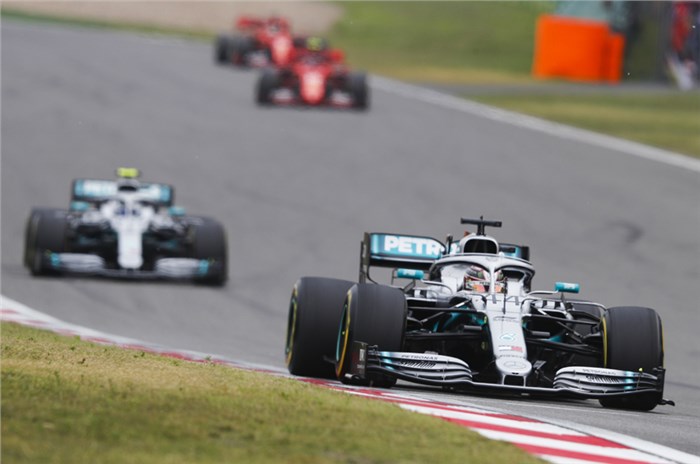 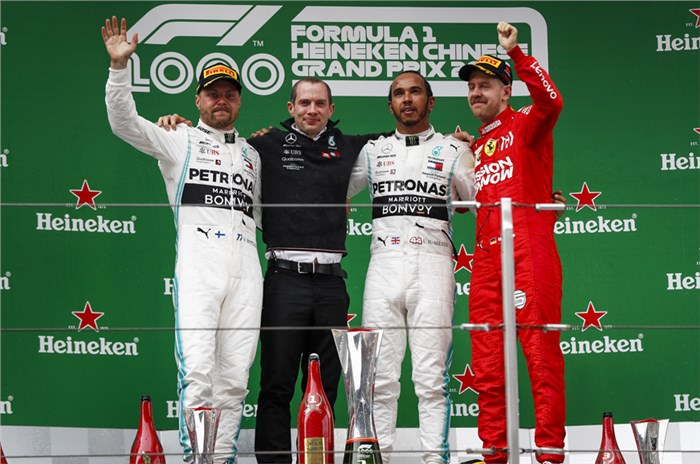 Mercedes clinched yet another strong 1-2 finish with Lewis Hamilton leading teammate Valtteri Bottas to win the 2019 Chinese GP – and concurrently record his name in history books as the winner of F1’s milestone 1000th world championship race. This puts Mercedes in a strong position at the start of the season, with the team earning a 1-2 finish in all three races so far.

Bottas started the race from pole position, but it was Hamilton who made the better getaway at the start and had already moved into the lead before the first corner. Meanwhile, Charles Leclerc jumped teammate Sebastian Vettel at the start to slot into 3rd place. The virtual safety car was deployed soon after to clear out the debris resulting from Daniil Kvyat making contact with both the McLaren drivers. Kvyat and Carlos Sainz initially collided, and Kvyat then made contact with Lando Norris, launching the latter’s car into the air. All three drivers were able to continue racing, but the stewards handed Kvyat a drive-through penalty for the incident.

Mercedes’ pace advantage at the circuit soon became apparent with both Hamilton and Bottas starting to pull away at the front. With Vettel spending several laps trailing Leclerc but being unable to pull off an overtake, Ferrari made the decision to order Leclerc to swap places with his teammate. Verstappen was just behind the Ferrari duo and Red Bull decided to attempt the undercut by pitting him early, essentially forcing Ferrari to pit Vettel in response. Vettel re-joined the track just ahead of Verstappen, but the Red Bull driver soon lunged down the inside of Vettel into the Turn 14 hairpin, briefly inching ahead. However, Vettel then cut back to the inside on the exit of the hairpin to retain 3rd place. Leclerc was the last of the front-runners to pit for fresh tyres, but by the time he pitted on lap 23, he’d already lost a chunk of time to Verstappen ahead.

By lap 36, Vettel, Verstappen, Hamilton and Bottas took their second pit stops – Mercedes successfully pulling off a double-stacked pit stop for both of its drivers. With Ferrari deciding to once again delay Leclerc’s pit stop, Bottas had re-joined the track behind him in 3rd place and it took almost two laps for him to overtake Leclerc for 2nd. This allowed Vettel to close in, but the Ferrari was no match for the Mercedes and he had to settle for 3rd place. Hamilton comfortably cruised past the finish line, over 6.5sec ahead of Bottas and 13.7sec ahead of Vettel, to take his sixth Chinese GP win.

Ferrari pitted Leclerc on Lap 42 and he now found himself in 5th place, over 15sec behind Verstppen. He was able to cut into Verstappen’s advantage initially, but later started complaining about gearbox issues. Ferrari later assured him that there was no problem with the gearbox, but he was unable to close the gap and finished the race in 5th place. Pierre Gasly took 6th place, but he did manage to score one extra point for setting the fastest lap.

Renault suffered a day of mixed emotions – Daniel Ricciardo finished the race in 7th place to earn his first points finish this season, but his teammate Nico Hülkenberg had to retire on lap 16, with the team investigating an MGU-K issue on his car. The only other drivers who were unable to complete the race were Kvyat and Norris.

Sergio Perez took 8th place for Racing Point, ahead of Kimi Räikkönen – the Alfa Romeo driver climbing up to 9th place after pulling off some well-judged overtaking moves. Alexander Albon put in an impressive performance to clinch the final points-scoring position. The Toro Rosso driver had to start the race from the pit lane since he was unable to participate in qualifying after his FP3 crash. But he managed to make a one-stop strategy work to finish in 10th place.