Vettel rounds up the podium as Ferrari is once again unable to end Mercedes’ winning streak this season. 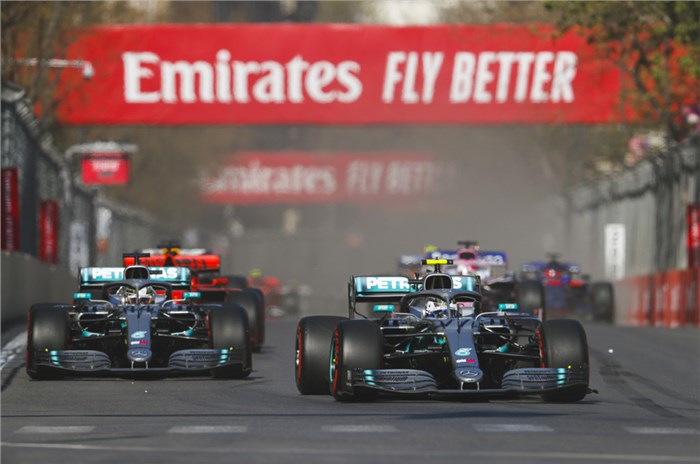 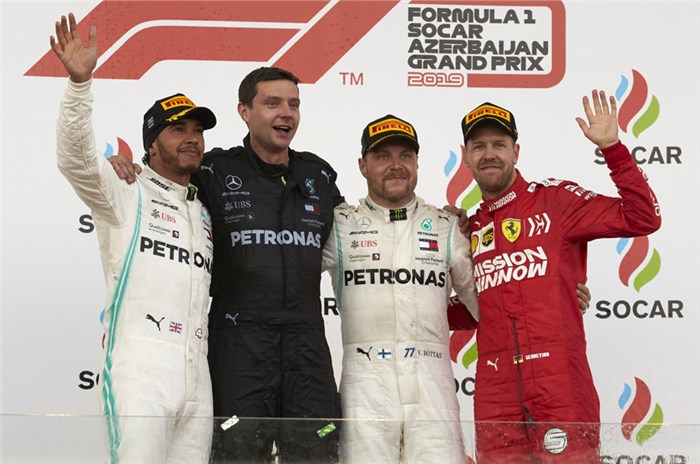 Mercedes continues to enjoy a near-perfect start to the 2019 F1 season, with the team taking its fourth consecutive 1-2 finish in just as many races after Valtteri Bottas won the 2019 Azerbaijan GP ahead of teammate Lewis Hamilton.

In the practice sessions, it initially looked like Ferrari had the stronger car but Mercedes gained the upper hand in qualifying, locking out the front row; and Bottas then went ahead and clinched a lights-to-flag victory at Baku. At the start of the race, both Mercedes drivers ran wheel-to-wheel at Turn 1, but Bottas managed to fend off Hamilton to retain the race lead and then started building a gap.

Running in 3rd place, Sebastian Vettel appeared to be lacking pace on the soft tyres. By lap 10, his teammate Charles Leclerc – who was running on the more durable medium tyres – had overtaken Max Verstappen and was just 3sec behind Vettel, despite having to start the race from 8th place after crashing out in qualifying. As a result, Ferrari decided to pit Vettel early, forcing Mercedes to follow suit with both its drivers. Majority of the laps thereafter saw Bottas, Hamilton and Vettel manage their pace to protect their tyres, all the while cutting into Leclerc’s lead as Ferrari prolonged his first run.

Bottas finally passed Leclerc to once again move into the lead on lap 32 and over the next two laps, Hamilton and Vettel managed to overtake Leclerc as well. By the time Ferrari finally pitted Leclerc, he’d not only lost a chunk of time to Verstappen but had also ended up re-joining the track behind Pierre Gasly. However, he was able to utilise his fresher soft tyres to soon overtake the Gasly for 5th place.

Gasly looked on course to pull off an impressive recovery drive after having to start the race from the pit lane for failing to stop for a weighbridge check in the second practice session. However, his car crawled to a stop with just 12 laps to go due to a driveshaft failure and the incident triggering a Virtual Safety Car. With all the frontrunners on older medium tyres, Leclerc looked to be in good position to make up some lost ground, but in a similar fashion to what his teammate experienced at the start of the race, he appeared to be struggling on the soft tyres as well.

At the front of the pack, Hamilton had chipped away at Bottas’ lead and was within DRS range with just three laps to go. But he ran wide on the penultimate lap and Bottas ended up crossing the chequered flag first to win the race. Vettel settled for 3rd place, never quite being able to catch up to the Mercedes drivers, despite showing better performance on the medium tyres.

Verstappen himself fell away from Vettel after the Virtual Safety Car period ended and finished the race in 4th place, ahead of Leclerc. Ferrari ultimately decided to pit Leclerc once again for fresh tyres in a bid to score an extra point by setting the fastest lap of the race – a strategy that worked for the team. Leclerc ended up setting a new lap record for the track.

Daniel Ricciardo and Daniil Kvyat ended up retiring from the race after a bizarre incident that saw Ricciardo run wide in Turn 3, catching out Kvyat in the process and later reverse into the Toro Rosso driver’s car. Ricciardo has been handed a three-place grid penalty for the Spanish GP for the incident.

Bottas now leads the drivers’ championship standings by a point from Hamilton. As for the teams’ championship, Mercedes holds a mammoth 74-point lead over Ferrari after just four races.