2019 ARRC: Honda India scores points at a challenging Round 4 in Japan 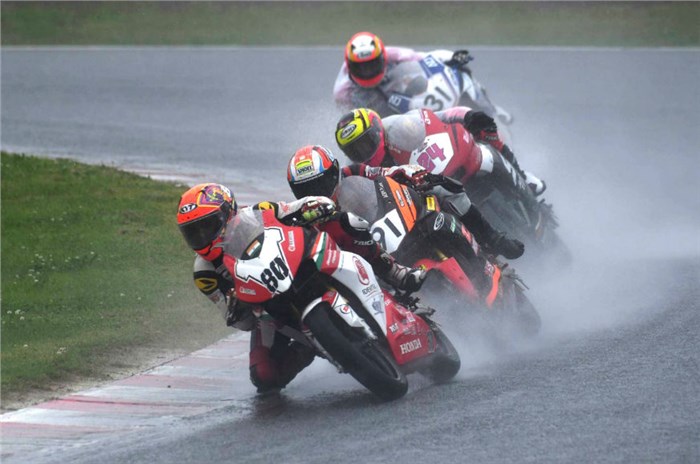 Round 4 of the 2019 Asia Road Racing Championship (ARRC) at the Suzuka Circuit in Japan served up two tough races for the Idemitsu Honda Racing India team, but they did find some consolation in bagging three points to add to their championship tally in the Asia Production 250cc (AP250) class.

Race 1 saw Rajiv Sethu qualify on the 5th row of the grid, starting from 13th place. But despite making a good start, a cornering mistake at Turn 16 dropped him to 15th place and he then lost another place to Indonesian rider Anggi Setiawan. Sethu did manage to recover and overtake Thai rider Tatkorin Buasri on the penultimate lap to slot into 15th place and claim a sole point for Honda India.

With the rain pouring down, Race 2 proved to be tricky, with as many as nine riders losing traction and crashing out. Once again starting from 13th on the grid, Sethu had a good getaway and was up to 7th place by the end of the first lap. But he had to pull off a recovery ride yet again as the rain resulted in his helmet visor fogging up, affecting his visibility and dropping him to 16th place. He ultimately ended up grabbing two more points after finishing in 14th place.

Senthil Kumar also endured two difficult races. He was running in 23rd place when he crashed in Race 1. His bike suffered some damage in the crash, but he was able to carry on and complete the race in 28th place. Despite calling Race 2 his toughest outing in the ARRC so far, owing to the weather conditions, Kumar was able to meet his target of a top-20 finish, jumping four positions in the last two laps of the race to take 20th place.

“Suzuka has been a satisfying round. Today [For Race 2] both our riders were able to complete the race despite as many as nine rider crashes. Rajiv maintained his pace and consistency in the top 15 despite heavy rains and fogging. Next round, he should bounce back stronger. For Senthil, today was his first complete wet race and he finished 20th. The progress is good, and the team will further strengthen both Rajiv and Senthil’s race-craft and track riding once back in Chennai,” said Prabhu Nagaraj, vice president – brand and communications, Honda Motorcycle & Scooter India Pvt. Ltd.

After Round 4, Idemitsu Honda Racing India is now 9th in the overall standings with a total of 25 points – just two points behind Honda Racing Vietnam. The ARRC will now be making its way to the Zhuhai International Circuit in China for Round 5 in August. Commenting on his expectations for the next round Nagaraj said: “Next up, ARRC will return to Zhuhai after seven years. This will be an absolutely new experience for most of the riders. But I am confident as both our boys adapt well in new tracks and will deliver results in China too.”