Marc Marquez won the race at Circuito de Jerez to lead the championship but it was a three-rider collision that really grabbed the headlines. 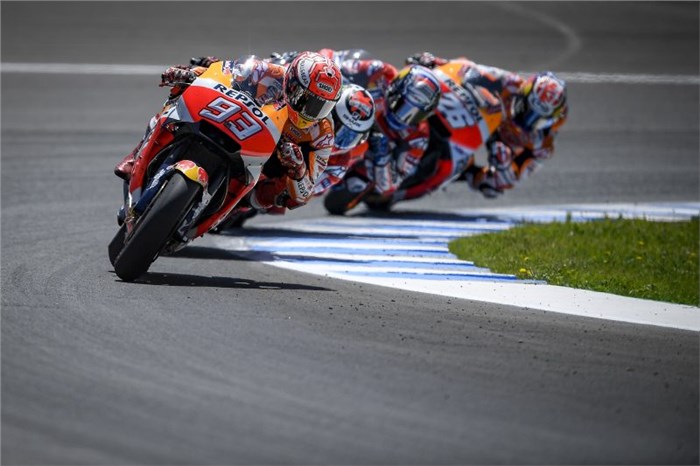 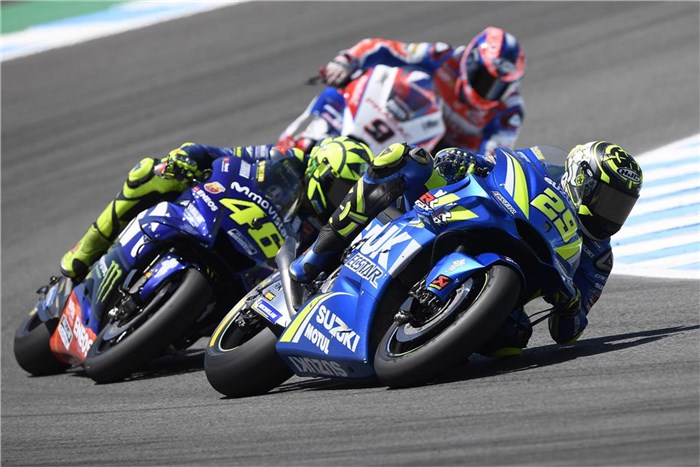 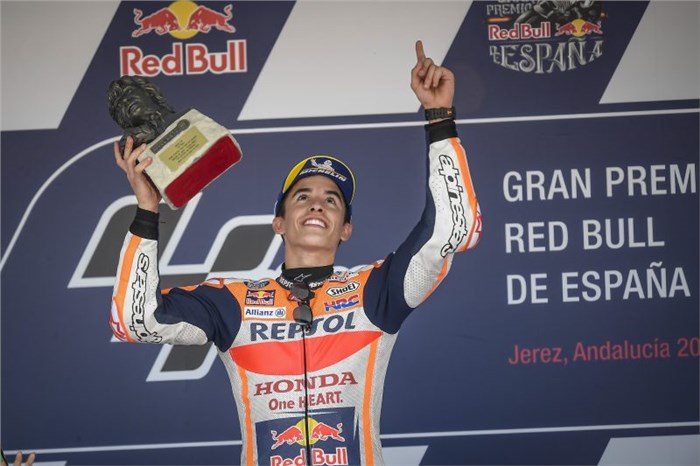 A bad qualifying performance couldn’t stop Marc Marquez from winning in front of his home fans at the Spanish Grand Prix in Jerez on May 6, 2018. A day prior, in the qualifying round, it was Cal Crutchlow who had grabbed pole position with a stonking impressive lap that broke the long-standing lap record held at Jerez.

When the race in Jerez commenced under the blazing sun, Crutchlow couldn’t capitalise on his pole position and dropped down to fourth place, closely followed by Marc Marquez. It was Jorge Lorenzo, however, who made a brilliant getaway to lead the race going into Turn 1. He was followed by Dani Pedrosa and Johann Zarco at second and third, respectively.

Rider positions remained unchanged for the next few laps; but Marquez, eager to make his way to the front, squeezed his way to second with 20 laps remaining. Lorenzo was the only rider in the leading pack to opt for soft compound front tyres – a decision that helped him to maintain his race lead. Frenchman Johann Zarco was struggling with his tyres and he ran wide on two occasions, which dropped him down to seventh place. Marquez finally saw his opportunity to pass Lorenzo at the end of lap eight and proceeded to take the race lead.

With track temperatures soaring, grip levels varied. Tyres struggled for grip on the track and Alex Rins was the first to fall victim to this. He was soon followed by Crutchlow, who lost the front of his Honda, putting him out of contention.

For a while, it seemed that the reigning MotoGP champion will be able to magnify his lead on Lorenzo with each passing lap. That wasn’t the case, though, as the Ducati rider was trailing him closely. It was a four-way battle between Marquez, Lorenzo, Dovizioso and Pedrosa for the race win as they broke away from the remaining riders. Despite Dovizioso’s best effort, he couldn't pass Lorenzo, who was able to manage his soft compound tyres with the help of his smooth riding style.  With 10 laps remaining in the race, Marquez put the hammer down as he started to increase his race lead, which at this point was over 2sec in the span of two laps.

Dovizioso knew that he couldn’t waste much time behind his Ducati team-mate and let Marquez amplify his lead. The Italian rider tried to out-brake Lorenzo and ran wide. Lorenzo, in turn, missed his braking marginally and tried to correct it by cutting back into the corner to regain his position. However, Pedrosa had taken the corner perfectly and was at the apex when Lorenzo collided into the Repsol Honda rider, resulting in a high side. Pedrosa was thrown off his bike. Lorenzo’s bike then hit the rear of Dovizioso’s and both Ducati riders crashed out of the race, spectacularly.

Despite three riders finding themselves on the tarmac, it wasn’t easy to blame a single rider for the carnage – it was simply an extremely unfortunate racing incident. The crash promoted Zarco to second place and Andrea Iannone rode determinately to grab the final podium finish. Marquez cruised his way across the finish line to register his 37th premiere class win and equalled legendary rider Mike Hailwood’s win record.

It was an entirely forgettable race for factory Yamaha riders, as Rossi ended the race in fifth and his team-mate, Maverick Vinales rode in at seventh position. The factory Yamaha riders struggled to win when track temperatures soared, last year. The same problem seems to persist in 2018 and they desperately need to find a solution.

The incident involving the Ducati duo and Pedrosa helped Marquez lead the championship standing by staying 12 points ahead of Zarco. Ducati will be disappointed that they have to return home empty-handed as they looked set for twin podium. The incident involving the crash of these three riders could play a pivotal role in deciding the riders' championship standings – but we are pretty sure Marquez wouldn’t be complaining.