Daniel Ricciardo wins at Monaco despite car issues; Vettel and Hamilton join him on the podium. 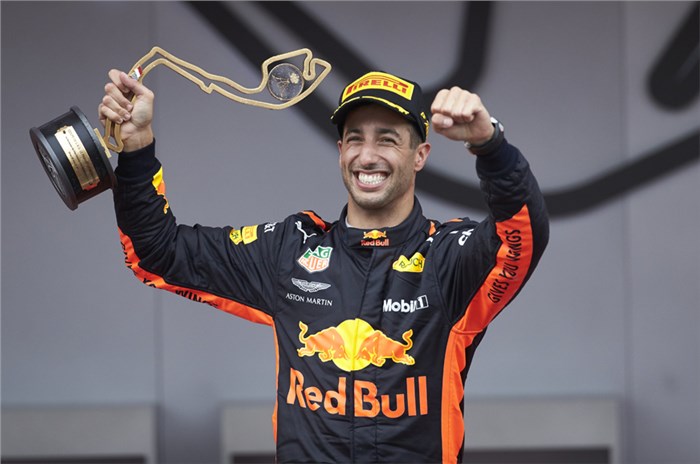 What should have been a comfortable win for Ricciardo turned out to be a race of disaster management, as the Australian driver had to bring his Red Bull home with a severe loss of power. An issue with the energy recovery system on his car caused Ricciardo to be up to 20kph slower down the straights and was unable to use the seventh and eighth gears on his race car.

Despite this, the 28-year old managed to lead every lap. He was able to comfortably fend-off Sebastian Vettel. Vettel, in turn, clawed back some points on Lewis Hamilton who finished 3rd in the championship.

Ricciardo got a clean start from pole and led into turn 1, gradually breaking away from Vettel, who was in 2nd. He held his lead after the first round of pit stops, coming out 3sec in front of Vettel. It was after this that he started to report a loss of power, allowing Vettel to close the gap to around 1.5sec. Hamilton in turn gradually closed in on Vettel's lead, and for a while, the top three were covered by just 3sec. However, with most of the field struggling with tyres, Ricciardo was able to hold firm in front of his pursuers. Hamilton dropped-off Vettel's back, complaining about graining on his tyres. A late Virtual Safety Car period came as a blessing for Ricciardo to nurse his stricken Red Bull to the chequered flag.

The Virtual Safety Car was caused by Charles Leclerc rear-ending Brendon Hartley on the run down to the Nouvelle Chicane. The Monegasque rookie reported ‘no brakes’ on his Sauber as he attempted to slow down for the chicane, forcing both drivers to retire from the race.

Behind the podium finishers, Kimi Raikkonen came home in 4th, fending off a charge from compatriot Valteri Bottas. Toro Rosso rookie Pierre Gasly impressed, once again, with a 7th-place finish, behind the Force India of Esteban Ocon. Max Verstappen came through from the back of the grid to finish 9th, one spot behind Nico Hulkenberg. The Dutchman was forced to start from last place after a heavy crash on Saturday. The top 10 was rounded out by Carlos Sainz, making it a double points finish for Renault. Fernando Alonso suffered his first retirement in the Renault-powered McLaren, stopping with a gearbox issue on lap 54.

Next up on the calendar is Canada – a race which Hamilton won from pole last year, and where Vettel was unable to get on the podium. With his winning streak having been interrupted at Monaco, the British driver will be hoping to get back on the top step, this time around. Hamilton leads the championship with 110 points, ahead of Vettel (96 points) and Ricciardo (72 points). All three drivers have won two races each, so far, with nobody else having won a race this year.