Jorge Lorenzo grabs first win at Mugello after a year and half stint with Ducati; Marquez fails to score any points in an action-packed Italian Grand Prix. 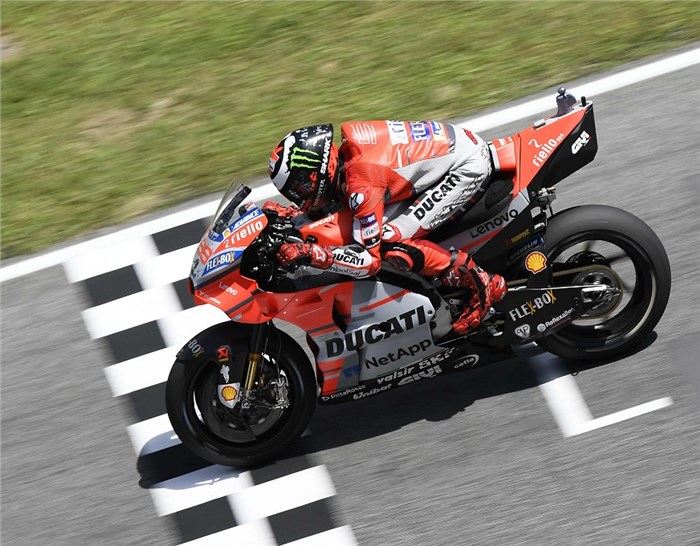 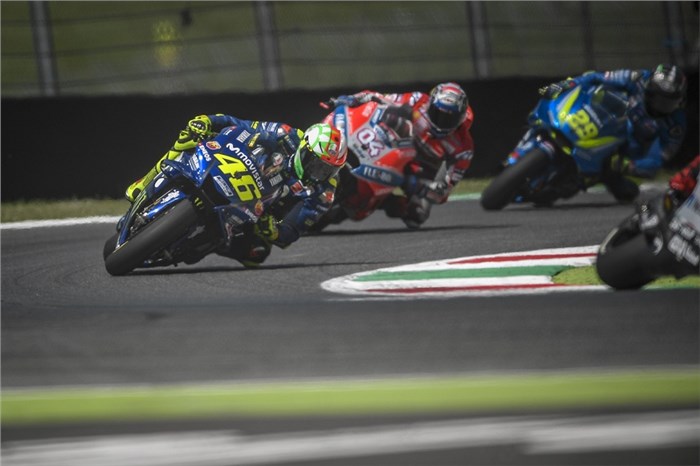 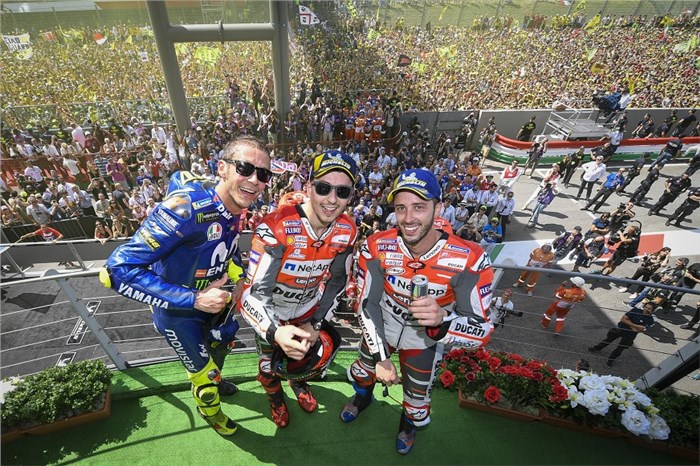 Jorge Lorenzo was at his dominating best to win his first race for Ducati at its home race in Mugello. Before the race commenced, all eyes were on crowd favourite, Valentino Rossi. The Italian started the race from pole position (his first pole after Motegi in 2016). Sadly, for Rossi, the pole advantage was lost the moment the lights went off, as Lorenzo launched his Ducati perfectly to nab the race lead. Marc Marquez also tried to pass Rossi, but carried too much speed and ran wide. The reigning champion muscled his Honda back on the racing line and bumped Danilo Petrucci to rejoin in 4th, behind Andrea Iannone.

Marquez was able to squeeze his way past Iannone and was hunting down Rossi while Lorenzo, in his element, posted some fast laps, taking advantage of the clear track in front of him. Marquez was able to overtake Rossi but the Yamaha rider shadowed him closely. The Repsol Honda rider was pushing hard to build a lead over Rossi, but his bike lowsided on lap 5, causing him to crash. Although Marquez was able to rejoin the race, he knew it was a costly mistake, on his behalf. Up ahead, Lorenzo was going strong with consistent fast laps and was able to amplify his lead further. In the previous two races, the Spanish rider had displayed a tremendous race pace in the opening few laps before fading away. However, in Mugello, it seemed as Lorenzo had rolled back the years and he rode in a smooth and consistent manner.

Lorenzo’s team-mate Andrea Dovizioso posted several fast laps, making amends for his poor qualifying position and start. The Italian rider managed to make his way up the grid – he even managed to pass Rossi rather easily for 2nd place, utilising the blistering straightline speed of his Ducati.

With the first two positions almost confirmed, it was a four-way battle for 3rd place. Rossi, Petrucci and the Suzuki pair of Iannone and Alex Rins rode hard to secure the final step on the podium. At first, it seemed like Petrucci would win this battle; but in the closing stages of the race, his pace dropped as his tyres deteriorated. Rossi, on the other hand, had cleverly conserved his tyres for a late assault. He managed to pass Iannone rather easily for 3rd place. Such was his pace, that he almost caught Dovizioso in the last lap. In typical Lorenzo fashion, it was a light-to-flag win for the Spanish rider and he was ecstatic to win his first race for Ducati since he parted ways with Yamaha in 2016.

The last year and a half hasn’t been easy for Lorenzo. He was criticised for his lack of pace while his team-mate Dovizioso finished 2nd in the championship, last year. The victory at Mugello will definitely rank as one of the best wins of his career and will hopefully also save his seat at Ducati, next year. Dovizioso was happy with the result, as he’s now 4th in championship standings. The Italian fans were overjoyed to see Rossi on the podium (194th podium finish in premiere class) and with Marquez failing to score a single point, the MotoGP legend is now 2nd in championship standings (72). However, Marquez still has a comfortable 23-point lead, standing at 95 points.