While rivals faltered, Marc Marquez maintained his composure to clinch yet another convincing win at LeMans. 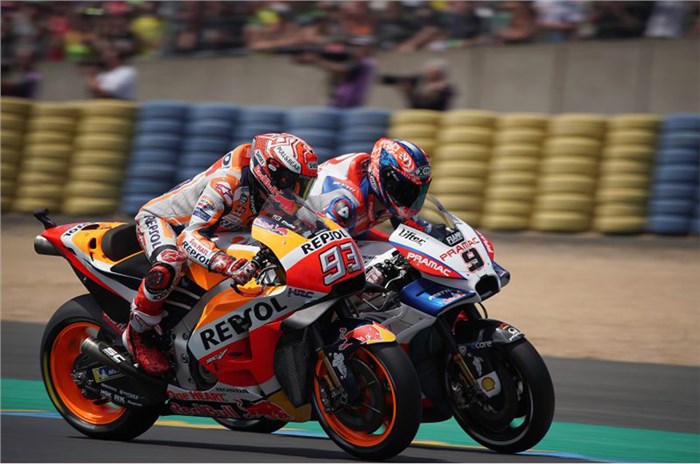 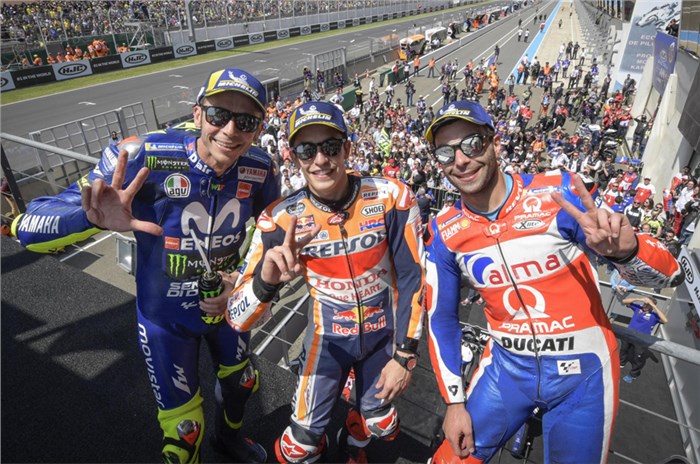 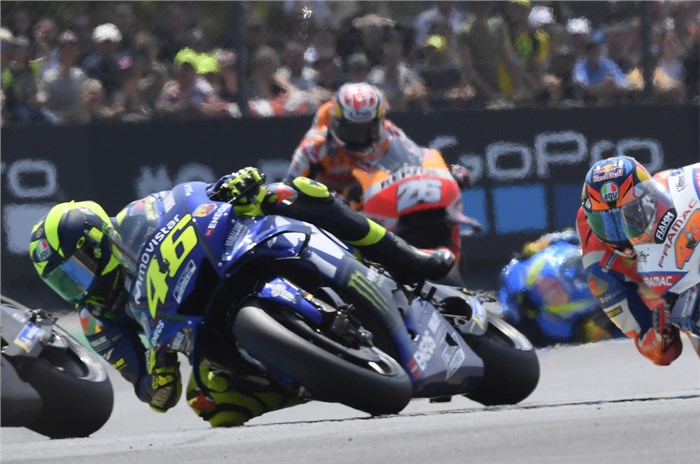 Marc Marquez cruised his way to register his third consecutive win in 2018 season and extend his lead in the championship standings by a massive 36 points. The LeMans circuit was packed to the rafters as local hero, Johan Zarco obliterated the lap record to grab pole position in front of his home crowd. French motorsport fans were excited and they had good reason, as after a wait of 30 years, Zarco was the first French MotoGP rider to qualify on pole in the French Grand Prix! Zarco couldn’t capitalise on his pole position as it was Ducat rider, Jorge Lorenzo, who led the race entering Turn 1. Zarco was pushed back to fourth place, but he muscled his way past Marquez, almost taking him out, to take second place and was followed by Andrea Dovizioso. Andrea Iannone was the first casualty as he crashed on the opening lap itself. By end of lap one, it was Lorenzo in the lead, but he was shadowed closely by Zarco and Dovizioso, respectively. In his desperation to grab the race lead, Zarco ran wide, which relegated him to third position, while Marquez was now up in fourth, as he overtook Danilo Petrucci.

Lorenzo was coming under immense pressure from his team-mate, and with 23 laps remaining in the race, the Italian rider managed to grab the lead. However, his happiness was short-lived as Dovizioso lost the front-end of his Ducati on Turn 6 to crash out of the race. This was his second consecutive DNF as in the last race at Jerez, he was taken out by Lorenzo. Further down the grid, Valentino Rossi logged the fastest lap of the race while running in sixth place. With 20 laps more to go, Zarco was struggling with his tyres and Marquez was inching closer to him with every passing corner. Marquez managed to pass him, but the French rider was quick to retaliate and regained his position to the delight of his home crowd. However, it wasn’t an afternoon to remember for French fans as Zarco also lost the front-end of his Yamaha in a similar fashion to Dovizioso’s, which ended his race. In the ninth lap of the race, Marquez decided it was time to make his move and he overtook Lorenzo to lead the French GP. Lorenzo’s woes weren’t over yet, and he was soon passed by Petrucci, who was trying his best to not let Marquez run away with the lead.

While Lorenzo was struggling for pace, Rossi sensed his opportunity – the witty old Fox of MotoGP increased his pace and a textbook overtaking manoeuvre saw him grab third place from the Ducati rider. With 13 laps remaining, Marquez seemed set to win yet another race as he had a decent lead over the Italian duo of Petrucci and Rossi. Petrucci did try to reduce Marquez’s lead, but, the Repsol Honda rider responded in style with some blistering lap times to extend his lead by two seconds. It was these last laps that showcased why he’s the fastest rider on the grid as he crossed the finish line to clinch his 38th premiere class victory. This win at LeMans makes him the fifth most successful rider in the history of MotoGP, along with Casey Stoner. Petrucci looked content with his second place finish as it was his best finish in the 2018 season so far. Despite lacking pace, Rossi was able to grab a lucky podium finish and he’s now fourth in the rider’s standings, just three points behind Vinales in second. However, it was Marquez who benefited the most from Dovizioso and Zarco’s crash as he comfortably leads the championship heading to Mugello.