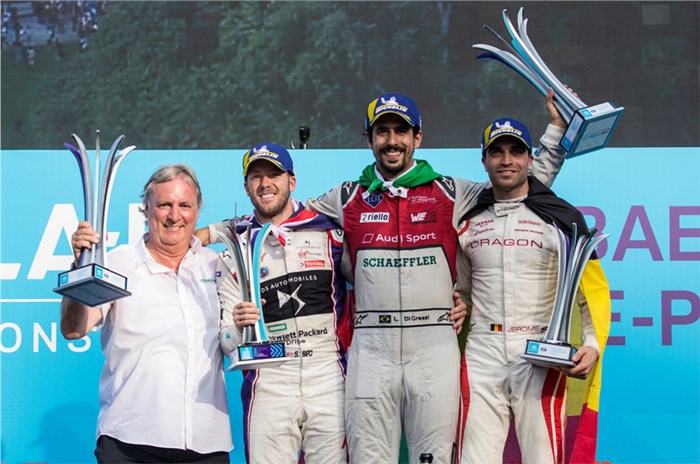 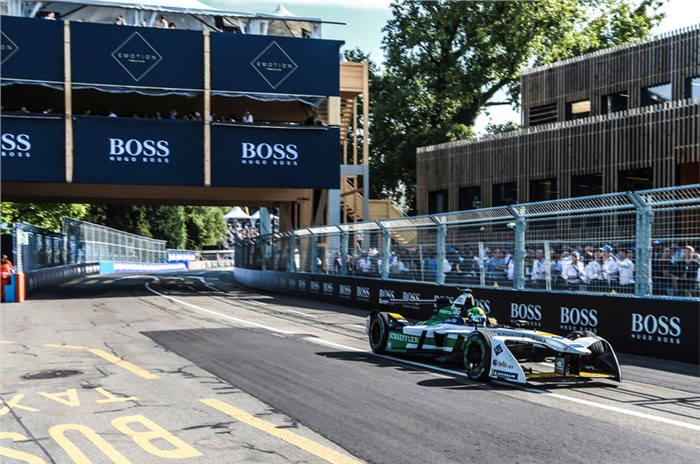 Lucas Di Grassi claimed his first Formula E win of the season in the in the Zurich E-Prix. The win was a special one for Di Grassi and his Audi team, as motor racing returned to Switzerland after a hiatus of 64 years.

Mitch Evans utilised his pole position benefit to etch out an almost 2sec lead in the opening stages of the race ahead of Andre Lotterer. However, the Kiwi driver couldn’t maintain his pace for long and was caught by fast charging duo of Lotterer and Bird. Lucas Di Grassi had also found his rhythm and dived inside Bird to take 3rd place. After a tough scuffle with Lotterer, the Audi rider was able to finally pass him on Turn 1. The Brazilian racer then posted some very fast laps and grabbed the race lead from Evans on lap 18.

While Di Grassi was leading the race, there was major drama down the grid. Vergne bumped into Felix Rosenqvist, resulting in the Mahindra Racing driver crashing into the wall. Rosenqvist managed to rejoin the race, but his damaged front wing fell off a few corners later, and Vergne barged into it. With so much debris being strewn across the racetrack, the yellow flag was out and the leading pack of drivers headed into the pits. A quick and faultless pit stop allowed Di Grassi to maintain his lead.

There was more drama as Vergne, Evans, Lotterer, Jose Maria Lopez and Sebastien Buemi were given drive-through penalties for speeding under yellow flag. All these chaos worked in favour of the Audi driver – he crossed the finish line with a lead of over 7.5sec. Sam Bird finished the race in second position, while Jérôme d'Ambrosio grabbed the final step on the rostrum.

Speaking about his win, Lucas Di Grassi commented, “One of the limiting factors today was battery temperature for everyone, so we knew we had to get it right. I tried to save a little bit more energy in the first half of the first stint, managed to attack on the next three cars within a few laps and I was a little bit lucky to overtake Mitch just before full course yellow. We’ve been very unlucky during the first part of this season. Now the luck has turned a little bit and we’ve managed to do five consecutive podiums, I think that’s a record as well.””

The victory at Zurich was the German team’s second consecutive win – this means they are just 33 points behind championship leader Techeetah. With the last E-Prix of the season being held in New York, there is still an opportunity for Audi to edge past its rival as it’s a double-header. For Sam Bird, the second place finish proved vital as he trails, championship leader, Vergne by just 23 points.

Speaking about his performance, Bird said, “I was disappointed after qualifying; I felt had really missed an opportunity to get three extra points with pole position. It’s just apparent that I have to lift more than the people around me and it’s been that way all the season. But we’ve got ourselves in this fantastic position and thankfully now, with the second place today, with a little bit of luck we can fight in New York.”

As for Vergne, it was a race to forget after finishing in 10th place and this has hampered his championship prospects negatively ahead of the double header finale in New York next month.