While six riders led the race at different times, it was Marc Marquez who emerged victorious. 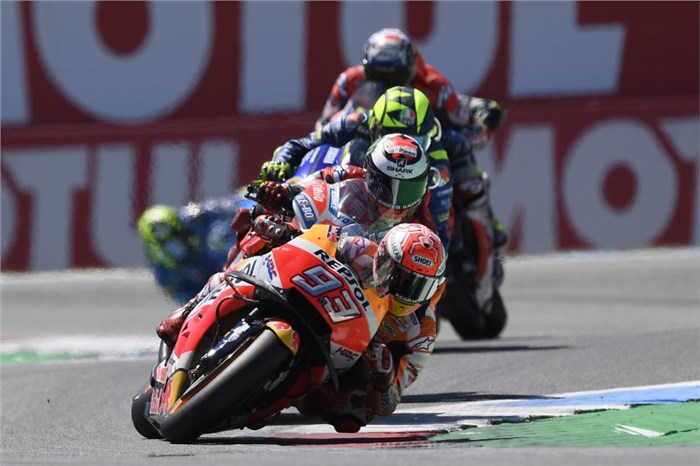 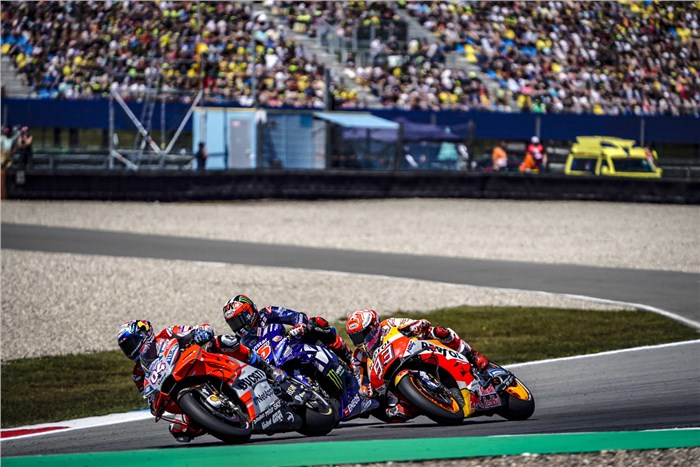 Marc Marquez won the most nail-biting race of the 2018 season in front of a packed housed at Assen. The Repsol Honda rider started the race on pole, but it was Jorge Lorenzo, who stole the limelight. The Ducati rider made a lightning start, which catapulted him from tenth to second place as the riders made their way through the first corner. Such was the Ducati riders’ pace that, by the end of the first lap, he managed to overtake Marquez and grab the race lead. Valentino Rossi, who had been pushed back to fifth place at the start of the race, was showing good pace as he carved his way past the grid in fifth place and in the second lap of the race, took second place from Marquez.

Despite having a clear track in front, Lorenzo wasn’t able to break away from the grid as he normally does. Rossi was close on Lorenzo’s rear, putting the Spanish rider under tremendous pressure. The front tyre of Lorenzo’s bike washed out, but the Ducati rider somehow saved himself from crashing out. However, the low-side meant that Lorenzo lost momentum and a fast-charging Rossi bashed into the Ducati’s tail section at over 190kph! Miraculously, both the riders managed to stay on their respective motorcycles and, despite the damages to their machines, their pace didn’t drop significantly. While Lorenzo still led the race, Rossi lost momentum in the incident and was pushed down to fifth place.

Suzuki rider, Alex Rins was on the charge and he muscled his way past Marquez and was trailing the Ducati duo of Lorenzo and Dovizioso by the halfway stage of the race. With 12 laps remaining in the race, Dovizioso overtook his teammate to lead the race. In the following two laps, Marquez regained his position and it looked like a three-way battle for the race win.

However, that wasn’t to be. Dovizioso and Marquez, both, ran wide off the track in their scuffle for the race lead, and this allowed the trailing pack of riders to overtake and Maverick Vinales to lead the Dutch Grand Prix. Such was the racing action that less than one second separated the top six riders! With a handful of laps remaining, Rossi became the sixth different rider to lead the race. However, his Yamaha couldn’t match the Ducati’s blistering straight-line speed and he was passed by Dovizioso. With four laps remaining, Marquez upped the ante and passed Dovi. The reigning champion posted one of his fastest laps of the race that saw him extend his lead to over 0.5sec.

The only rider who could come close to Marquez’s pace was Rossi, but he ran wide off the track in an attempt to defend second position from Dovizioso. While other riders struggled for grip, Marquez was flying around the ‘Cathedral of Speed’ and crossed the finish line rather comfortably. Rins managed to pass Vinales in the last lap, to clinch his best result in premiere class. It was Marquez’s ninth podium finish at the Dutch circuit and he now extends his championship lead over Rossi by 41 points. The next race is at Sachsenring, which is one of Marquez’s favourite racetracks, and he looks on course to extend his winning run in Germany.