Mercedes driver Lewis Hamilton registered his first-ever podium finish and win at the Azerbaijan GP as late-race drama worked in his favour. 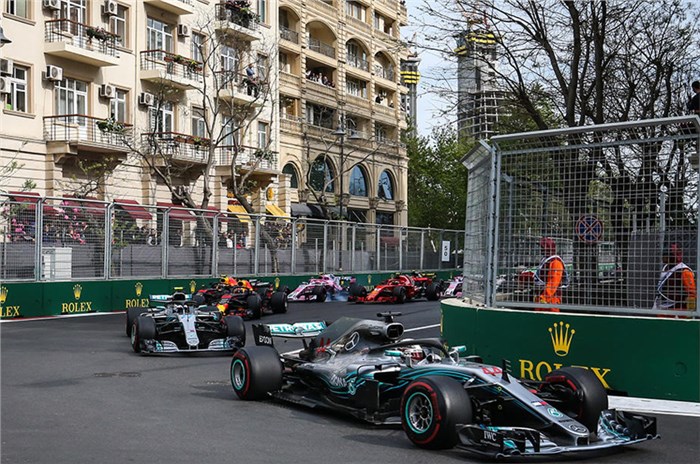 Lewis Hamilton took a surprise win at an action-packed race in Baku. Ferrari driver, Sebastian Vettel, looked like the strongest contender given his pace. The German driver also grabbed pole from his teammate, Kimi Räikkönen, who slid in the last sector that ruined his pole-clinching fast lap. As expected, there was a lot of drama in the opening lap of the race, when an over-ambitious move from Esteban Ocon to pass Räikkönen resulted in the Force India driver crashing out of the race, while the Ferrari driver had to head to the pits to replace his front wing. Sergey Sirotkin also clashed with Sergio Perez and Fernando Alonso, which ruled the Williams racer out of the race. Both these incidents meant that the safety car had to be deployed. Vettel, who was leading the race, smartly backed the field up and made a perfect getaway before the final safety car line to etch out a comfortable lead.

Hamilton had locked up his tyres on many occasions in his desperation to cut down Vettel’s lead and this forced him to pit earlier than expected. Valtteri Bottas was able to extend his stint on the supersofts and this allowed the Mercedes driver to pass his teammate and take second place as Hamilton was struggling on his fresh tyres. Up ahead, Vettel had a good lead over Bottas and looked set for another win. Further down the grid, there was an exciting scuffle going on between Redbull duo of Daniel Ricciardo and Max Verstappen. After some close wheel-to-wheel racing, the Aussie driver was able to pass Verstappen and even managed a slender lead as he headed to swap tyres. Verstappen went into the pits a lap later and managed to emerge ahead of the Aussie driver, despite his better pace. Ricciardo was getting restless to overtake his teammate and saw his opportunity on Turn 1 utilising the slipstream offered by the Dutch driver.

The drivers were swaying to outfox each other, Ricciardo lunged on the inside and at the same moment, Verstappen closed the door. The Aussie driver rammed into his Red Bull teammate, forcing both the drivers out of the race, to the dismay of Christian Horner. With the safety car coming out again, Bottas headed into the pits ahead of Vettel, which allowed him to clinch the race lead, while Hamilton was in third place and a resurgent Räikkönen in fourth. We were in for more drama when Romain Grosjean surprisingly lost the rear of his Hass and crashed into the wall while swerving to keep his tyres warm. All the above incidents meant that there were only four laps of green-flag racing remaining.

Bottas made a good start, but an overenthusiastic Vettel tried to pass him and in the process locked up his front wheel and ran wide, which relegated him to fourth. Bottas had a comfortable lead over Hamilton, but he ran over some debris, picked up a right-rear puncture which cruelly ruled him out of contention. Hamilton, who had never even managed to finish on the podium at Baku, was now leading the race and he took the chequered flag to clinch a surprise win. Vettel was passed by Force India’s Perez in the penultimate lap as he was struggling with a flat-spotted tyre to register a podium finish for his team. Räikkönen, who was relegated to the back of the grid after his first lap incident, crossed the line in second place. Hamilton now leads the championship by four points over Vettel, however, the German driver should be happy with his pace throughout the weekend. Ferrari now leads the constructor’s title as Bottas’s DNF robbed Mercedes of valuable points.