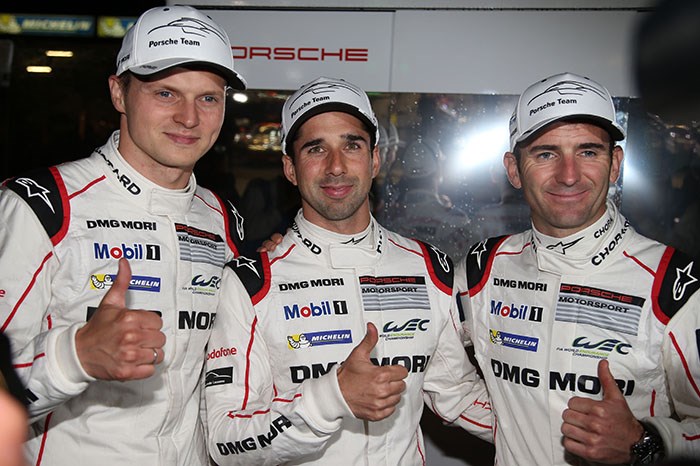 Jani set the fastest time of the three qualifying sessions early on Wednesday evening, despite catching traffic exiting the Porsche Curves, and he survived two attacks from team-mate Timo Bernhard in the #1 car in the first hour of qualifying.

Bernhard, like Jani in the #2 machine, hit traffic on both of his runs, meaning he ended the only dry qualifying session 0.4s down on the polesitter.

Porsche started the third and final qualifying session wondering if it would have to defend its top two places, with initial predictions hinting at dry conditions for the final half an hour.

But heavy rain started as the two hours of track time began, and eventually it forced a lengthy red flag stoppage to allow conditions to improve on the flooded circuit.

The session resumed with 45 minutes remaining on the clock, but the track was still far too wet for any meaningful times to be set.

Jani said: "Last year [the lap to take pole] was a real banger, but the circumstances were a bit different this time.

"We knew rain was possible today, which is why we went out straight away yesterday.

"We all had to take risks in traffic, and I guess I managed it best or lost the least time."

Toyota occupied both places on the second row, with Stephane Sarrazin one of the only LMP1 drivers not to complain about traffic after his best lap, which was one second down on Jani.

The Frenchman put the #6 TS050 third on the grid, while Anthony Davidson - who did hit traffic - was 2.1s off pole in fourth.

Audi paid the price for missing the early part of first qualifying on Wednesday by not being able to qualify its two cars higher than the third row.

The #7 car missed the first few minutes of qualifying, when three of the four cars ahead of it set their best times, while the team fixed a small problem, leaving Andre Lotterer to set a best lap three seconds off the pace later on.

That time was in fact beaten by Lucas di Grassi late in first qualifying, as the #8 Audi made up for lost time following lengthy repairs to its front drivetrain after it suffered a failure in free practice.

However, the #8 car exceeded its fuel allowance on that lap, so it subsequently lost the time and was moved back to sixth place behind its sister car.

Dominik Kraihamer ensured the #13 Rebellion won the privateer LMP1 battle, qualifying 6.8s off the pace and 0.7s ahead of the #12 Rebellion, driven to its fastest time by Nelson Piquet Jr.

The ByKolles CLM got itself onto the grid in the short window of dry running at the start of qualifying two on Thursday, with Pierre Kaffer posting a 3m34.168s after the team missed Wednesday's running following a fire in free practice.

G-Drive Racing's ORECA will start from pole in LMP2, based on Rene Rast's time on Wednesday evening.

The factory Audi driver qualified 0.570s clear of the field in the ORECA 05 he will share with Roman Rusinov and Will Stevens, on-loan for the event from Manor.

Alpines will line up second and third thanks to Nelson Panciatici for Baxi DC Racing and Nicolas Lapierre for the factory Signatech's efforts, the pair split by less than one tenth.

However Vanthoor and team-mates Oswaldo Negri Jr and John Pew will have to serve a five-minute stop-go penalty in the first half of the race, after the team changed its Honda engine on Thursday, when a crack in the oil pan was found.

Defending LMP2 winner KCMG will start ninth - in a top 10 split by 2.865s - with Thursday's wet weather costing it the chance to move up the order.

Less than half of the 23 entries set a meaningful time in the third part of qualifying, with Merhi's pre-red flag 4m11.686s six tenths faster than Vanthoor's 4m12.280s, set as he greeted the chequered flag.

Ford claimed a one-two on the GTE Pro grid for its return to Le Mans, with all four of its GTs in the top five.

Dirk Muller's Wednesday night benchmark of 3m51.185s remained unbeaten as none of the GTE Pro field improved across either of Thursday's sessions.

Gianmaria Bruni put the #51 AF Corse Ferrari 488 GTE third to split the quartet of Fords, with Harry Tincknell in the #67 besting Oliver Pla's #66 machine by a tenth.

Sam Bird was a second shy of Bruni's effort in the second of the AF-run 488s, leaving the #71 sixth but clear of another guesting IMSA regular, the #82 Risi Competizione Ferrari.

Giancarlo Fisichella could have improved in the #82 but suffered a high-speed spin at the Porsche Curves that ended its opening session early.

Team-mate Matteo Malucelli had a similarly hairy moment when he aquaplaned at the first corner and prompted the final session's red flag.

The fierce pace from the Fords and Ferraris in the opening session led to theWorld Endurance Championship rulemakers evaluating a mid-event Balance of Performance change, and the lack of opportunity for the other three manufacturers to improve on Thursday ensured the picture remained murky overnight.

The #92 Porsche Motorsport 911 RSR wound up best of the rest in eighth with a 3m54.918s from Frederic Makowiecki.

Marco Sorensen was one place further back in the best of the Aston Martin Vantages, while the Chevrolet Corvette C7.Rs were slowest in class.

The #64 was 4.7s off the pace and the #63, which suffered an off in the hands of Ricky Taylor, fared even worse and will start behind four GTE Am cars.