1.4 TSI power for the Polo Cup this year making 180 bhp, mated to a 7-speed DSG. Expected to lap Chennai circuit around 1min,55 sec. 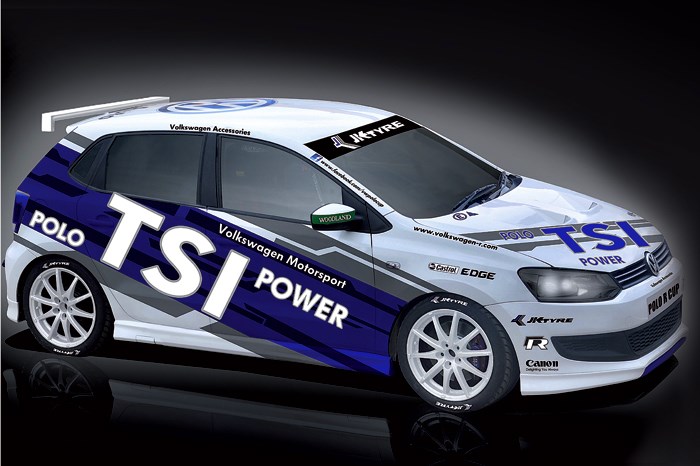 The new machine is set to be officially unveiled on 17th May in Delhi.

Heading the list of overhauls is the change in heart, with the torquey but unexciting 1.6-litre diesel mill finally being swapped out in favour of the 1.4-litre TSI twin-charger engine making 180 horses (the diesel made 130 bhp). The revolutionary engine uses a combination of a supercharger and a turbo to afford the best of both worlds – low down torque of a bigger engine and top-end of a turbocharged motor.

The engine will be mated to a production-spec 7-speed DSG box, but with tall top gears optimised for fuel economy, the race Polo is unlikely to use more than the first five ratios even on the 1.1km back straight at the Buddh International Circuit – a likely venue on the national racing calendar this year.

In excess of 20 cars have been built from scratch as VW India elected to scrap the older chassis which had borne the brunt of the first two seasons.

Despite the lighter petrol motor, the new race Polo is likely to weigh in the same region as its predecessor due to the heavier DSG box.

There is a major upgrade in running gear as well, with upgraded brakes, but the tyre size remains unchanged (200/605 R17 slicks). We also expect a slightly more durable (harder) compound from JK Tyre. The 1.4 TSI has a peak torque of 25.5kgm – same as the 1.6 CRDI but the curve is flat through 2000-4500rpm – a much broader spread compared to the 1000rpm peak torque band of the diesel.

This mid-range grunt will certainly give front tyres a hard time through low/medium-speed, technical corners with high amounts of steering lock – which the Chennai and the Coimbatore circuit feature aplenty. With the drivers complaining of perennial understeer in the previous seasons, it will be intriguing to see how the new tyres take on the challenge of handling a faster car without increasing the footprint.

How fast though? The new TSI Cup Car is expected to lap the Chennai circuit in the region of 1 min 55sec, making it around 7sec a lap quicker than its predecessor. For reference, that is almost as quick as an Audi R8 V10 around the same circuit.

With VW India currently being a sponsor for the IPL, the racing series is expected to announce a tie-up with IPL Team Delhi Daredevils as well – marking the first occasion where another sport will be officially associated with motor racing in the country.