20 drivers to contest the season, including one foreign driver. Three categories based on racing experience and more prize money as well. 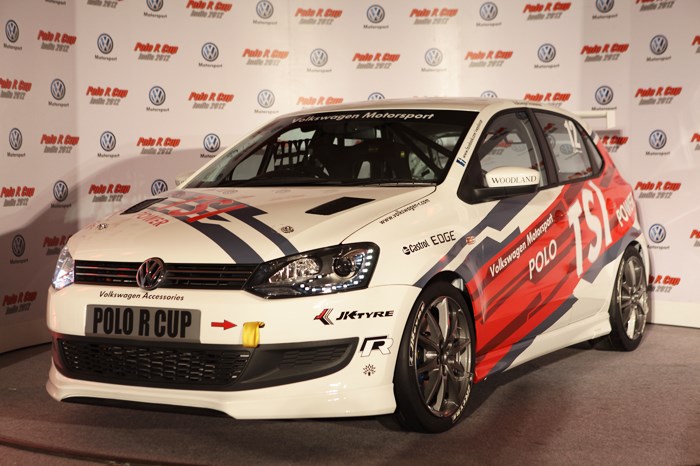 As first revealed by Autocar India, the ‘new for 2012’ VW India Polo Cup racer has now been officially unveiled by Volkswagen India. Heading the list of overhauls is the new 1.4-litre TSI engine which replaces the 1.6 TDI mill used since the series’ Indian debut in 2010.

The 180bhp ‘turbo-supercharged’ engine (for details refer the link above ) is mated to a six-speed DSG box with paddle shift and a limited-slip diff – considering the torque-steer which high-output FWDs are prone to.

Brakes are bigger and get ABS assistance as well.

All this wizardry means the new Polo TSI race car will tip the scales at 1195 kg – a 20 kilo increase compared to the its TDI predecessor but the power advantage and superior drivetrain will ensure better performance, with the new car expected to be seven seconds a lap quicker around the Chennai circuit.

JK Tyre will continue to supply spec tyres, albeit a new compound to handle the extra horsepower  will be used.

To bolster participation and level the competitive field, the drivers have been classified into three categories– Junior, Pro and Masters. First-time racing drivers (with less than 8 national championship races under their belt) come under the Junior category, with an upper age limit of 26 years.

At the end of the season, the winner of the Junior Cup will be entitled to a fully-paid drive in the 2013 Polo Cup India season, where he will participate in the Pro Category.

The Pro Category includes drivers who have already competed in the series previously or have previous racing experience in other categories. The winner will get a fully-paid drive in a VW Program abroad for the 2013 season. In the previous two seasons, the Polo Cup India champion has gone on to compete in the German Scirocco-R Cup.

Also for the first time, the series will see full-time participation of a foreign driver with Mexican Deigo Duez competing in the Pro Category. The JK Tyre-backed driver will however not be awarded the fully-paid VW program abroad even if he wins the championship since only Indian nationals are eligible for the ‘National Championship’.

The final category is the Masters, a new class which has been shoehorned in to allow drivers older than 26 years. However, they will not be eligible for the overall championship or the fully-paid program abroad.

Prize money has gone up as well with first, second and third place finishers taking home Rs 50,000, Rs 40,000 and Rs 30,000 respectively. On the flip side though, the participation fee sees a hefty increase as well – with  Junior and Pro categories costing Rs 7 lakh for the season while the Master category fee is a whopping Rs 14 lakh – a stratospheric amount considering that the competitors are just allowed to use the front bonnet for sponsorship branding.

Dr. John Chacko, President and Managing Director, VW India, said, “With the immense success of the inaugural Indian GP, India is establishing itself as a motorsport hub and we are happy to play our role in promoting the same.

Prithviraj Siddappa, Head of Motorsport, VW India commented, “It is a strategic decision for us to shift from diesel to petrol as we want to offer our drivers a more powerful racing machine.

The 2012 Polo R Cup season kicks off in Coimbatore on 8th July.