The riders are confident of the significant progress over the 2011-spec machinery, but concede it will take time to extract its full potential. 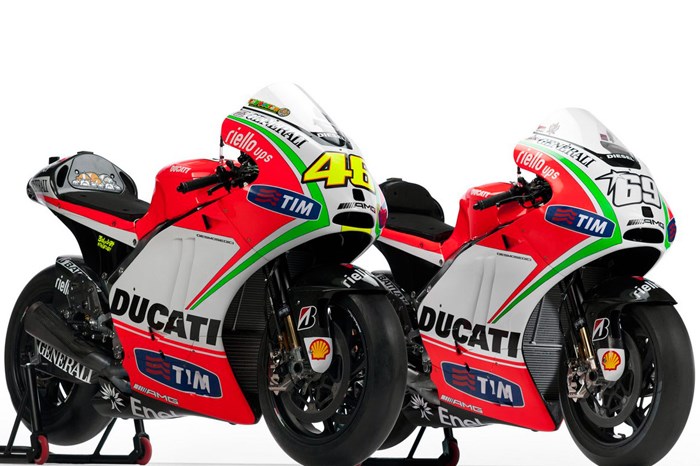 Ducati has officially revealed the GP12 in its revised livery – the Italian marque’s challenger in the 2012 MotoGP World Championship season.

Team riders Valentino Rossi and Nicky Hayden have expressed confidence in the new design, suggesting that Ducati just needs time to fully understand the new machine before it can be a frontrunner again.

Speaking at the launch, the pair said that the sheer number of changes compared to the 2011 Ducati meant it would take a while before it showed its true potential. The GP12 showed promising form at the first winter test, but the second test was more troubled.

"I know that plenty of changes have taken place. We have incredible competition," said Rossi. "We've started to work with this bike in the tests and [technical chief] Filippo [Preziosi] and the team have put in an incredible effort.

"The bike has changed so much compared to the model we had last year.

"I think we just need some extra time to establish a sort of friendship with this bike and familiarise ourselves with the new concept."

Hayden underlined that even at this early stage, it was clear Ducati had made gain with the new bike.

"I think we've improved in a lot of areas," he said. "Obviously with the engine, the extra 200cc is a lot, but with the chassis we've made a big step. This chassis has more feeling and it's easier to make adjustments, so during the weekend we can find the right way."

Rossi agreed that the fact that the bike was easier to work with would be an asset.

"What counts is improvement," he said. "We tried to progress last year but it was very difficult. This year, race after race we will improve.