Both models have a waiting period of around one month. 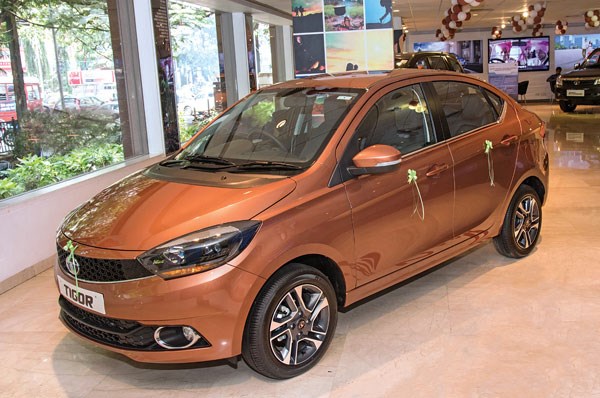 The Tigor XZ and XZ(O) variants are most in demand.

Tata Motors added two new models to its passenger vehicle line-up – the Tigor compact sedan and the AMT version of its Tiago hatchback – in March this year. The Tiago, which was launched last year with a manual gearbox, drew customers into showrooms and the two new models are steadily building on this popularity.

The demand for the Tigor is on the rise and this has resulted in longer waiting periods for the model across the country. Dealers have revealed that the two top variants, XZ and XZ(O), already have a waiting period of four to five weeks, while the mid-spec XE trim has a delivery time of approximately 20 days.

The Tigor XZ(O) comes with features like smoked projector headlamps, alloy wheels, touchscreen infotainment and climate control. The demand for both the engine options – the 85hp, 1.2-litre petrol and the 70hp, 1.05-litre diesel – are on par in most cities. From the six paint shades on offer, brown and white are the most sought-after ones.

The compact sedan rivals the Honda Amaze, the Ford Aspire, the new Maruti Dzire and the recently updated Hyundai Xcent.

Also on the rise is the waiting period for the Tiago AMT, with some dealerships promising deliveries after over a month. It is available only in the top-spec XZA trim with a 1.2-litre, three-cylinder petrol motor. Its direct rival, the Celerio ZXi AMT is priced around Rs 60,000 higher.

Disclaimer: Waiting periods are subject to change depending on location and dealership. Please contact your nearest dealer for more details.