The Flying Finn here to urge people to sign a ‘Never drink and drive’ pledge. 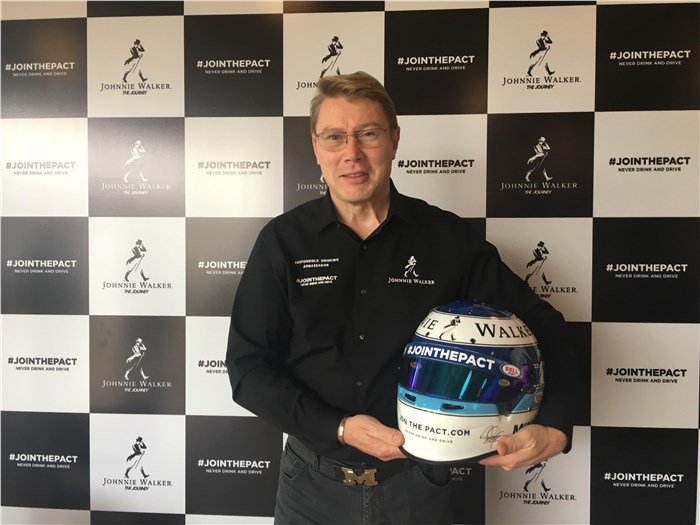 Double Formula One world champion Mika Hakkinen braved Mumbai roads today, saying he was amazed at the sheer number of cars and auto-rickshaws that ply the island city’s streets every day.

“My answer is, yes,” the former McLaren driver nicknamed the ‘Flying Finn’ told Autocar India when asked whether Mumbai’s traffic had shocked him. Mika braved Mumbai, giving passengers a quick spin around the Bandra-Kurla Complex.

“It’s quite amazing how the people drive in Mumbai and the quantity of the cars and the tuk-tuks (auto-rickshaws) over here.”

Hakkinen is in India to promote Johnnie Walker’s Responsible Drinking Programme and Join the Pact campaign, which urges people to sign a pledge to never drink and drive.

He arrived on Thursday, and while, traffic during his Saturday morning drive through the BKC was sparse, he has had a taste of what it’s really like.

Hakkinen is due to travel to New Delhi tomorrow, where he will do a series of demonstration runs in two-seater open-cockpit Caparo T1, and is hoping to convince two million people in India to sign the pact.

“What is important is always safety,” the 49-year-old said.

“Road safety is important. I think it’s very important that people always remember that staying in control is one of the most important things. It’s not all about think about yourself, it’s think about the others.”

Hakkinen raced in Formula One for eleven seasons, bringing the curtain down on his career at the the end of 2001.

He won back-to-back titles in 1998 and 1999, but is best remembered for his fierce wheel-to-wheel battles with seven-times world champion Michael Schumacher, who held Hakkinen up as the rival he feared and respected the most.

Hakkinen said Formula One’s continuing safety push had changed the sport from when Schumacher and him diced for position, while modern day grand prix racing’s data-driven approach meant drivers on the grid today are a lot more evenly-matched than when he was racing.

“There are quite a good number of talented people out there,” he said.

“But If you look to my day and today’s Grand Prix drivers, the competition has become much more equal just because there’s much more knowledge and lots of tools for drivers to learn from, to become better. But still there are talented drivers that stand out from the rest”