This is a landmark moment for Ford: its first bespoke electric car, and it’s wearing a Mustang badge. Is it up to the job? We plug you in. 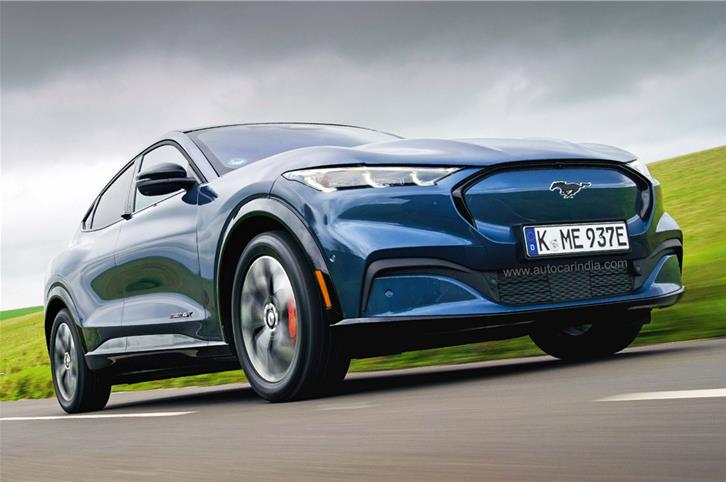 So, Ford has electrified a new Mustang; note the use of the indefinite article there, folks, because we’ll come back to it. The new Mustang Mach-E is a high-rise, four-door crossover-ish hatchback, and it comes with the choice of either one motor or two; a bigger drive battery or a slightly smaller, lighter one; and with up to 610km of WLTP-certified range (which, not so coincidentally, is as much as any current Tesla will give you, and more than you’ll get from any electric Polestar, Jaguar, Mercedes- Benz or Audi).

It’s an impressive EV debutant for plenty of reasons, but perhaps not quite as impressive as the strategic design and positioning behind it, which, if it works, could be a masterstroke. The designation of an electric car as a Mustang will be anathema to some, of course, and it puts a weight of expectation on this car’s driving experience that those same critics will inevitably claim it can’t possibly deliver upon. I don’t think it does too badly with it, actually. 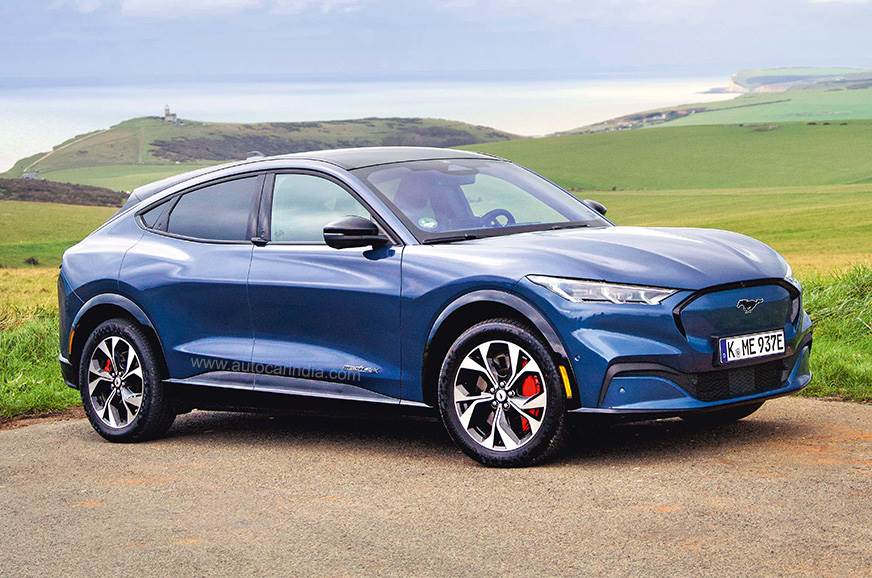 Sloping roof and overall size belie the fact that there is generous space for five inside.

But the thing is, this is very much ‘a’ new Mustang. It’s not ‘the’ new Mustang (imagine the reaction if Dearborn had simply swapped a 5.0-litre V8 for a couple of electric motors). It’s not the killer of Ford’s V8 pony car icon, but rather the perfect modern sidekick to it, come along not as a threat (at least, not for now) but rather to extend the old-timer’s life for as long as it might.

Like plenty of other major carmakers, Ford’s current ‘big job’ is to cut the average CO2 emissions of the new cars that it sells in order to avoid big fines. This is not news – and it’s partly why there has been such an all-round rush to introduce electric cars this year, which is the first for which financial penalties are being imposed. Selling so many V8-powered Mustangs in Europe – and they’ve been doing rather more of them than they ever expected to, by the way – isn’t currently helping to achieve that ‘big job’.

An EV will help, though, and the Blue Oval has been working on its first proper EV since 2014. It could have been something smaller and more affordable than the Mach-E, left to sit in a new and zanily decorated corner of the showroom and quietly do its own thing; and, but for some bright spark, I suspect it would have been. That’s precisely the way plenty of Ford’s competitors have set about the problem. 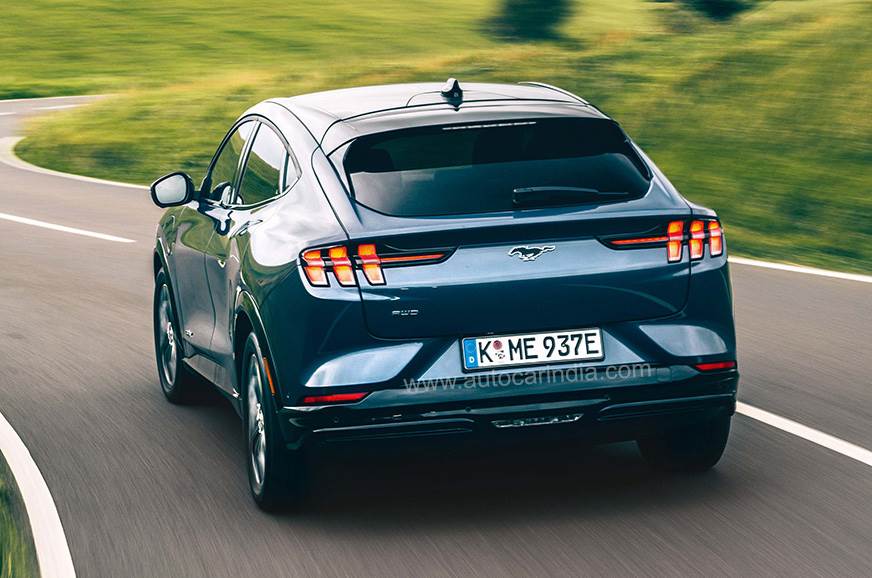 But a couple of years ago, a voice in the Ford design department said something along the lines of: “Hold on. Why don’t we stick it right in the middle of the showroom instead? Why not design it like a Mustang, sell it like a Mustang, stick our chests out and be proud of it?”

Why not indeed. Because a cheaper EV like a Nissan Leaf or Volkswagen ID.3 might have sold in greater numbers in Europe, but Ford needed a global EV to do the business in North America and elsewhere, too. It needed a bigger and more usable car with a longer range; and because making it like that would also make it expensive, it also needed a global pseudo-premium brand to sell it under. 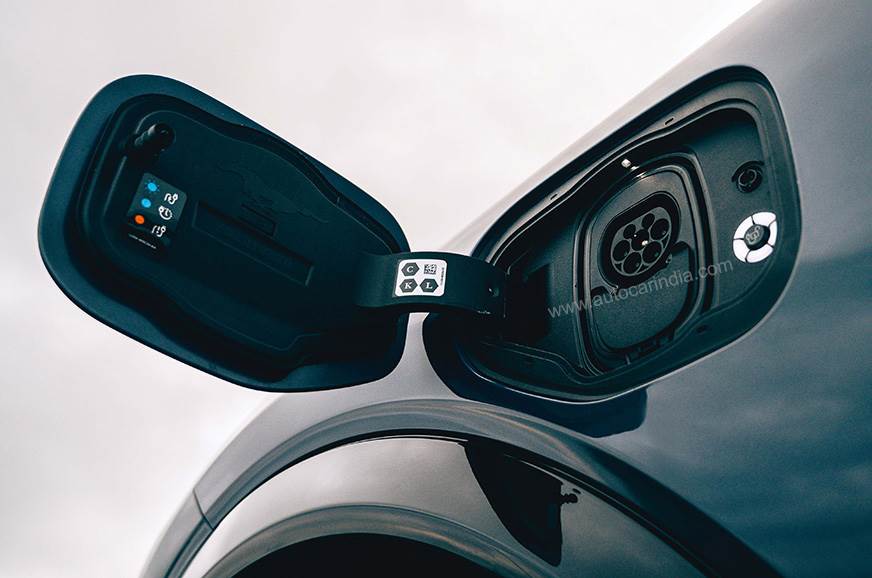 A full charge gives you 540km of range (claimed).

An electric Lincoln would have meant nothing to people in Europe. An electric Mustang, on the other hand, makes a brilliantly inclusive implicit statement to Ford’s most enthusiastic, evangelistic and big-spending customers. “Electric cars aren’t for other people,” it says.

“They’re for you, too. This is your kind of car. Buy a Mach-E and you can be part of the solution to our emissions problem. And if you do,when you want to replace your V8 Mustang in two, or three, or five years’ time, there’s a much better chance that we’ll be able to sell you one.” Mustang owners are being given a buy-in here. Albeit tacitly, they’re being trusted to ‘get it’. If they can, surely everyone can?

So will they? Some would say that’ll depend on whether Ford has made an electric car debutant that drives in a way that’s worthy of a Mustang badge. (The only place you’ll see Ford badges on this car, by the way, is on the corners of the windows.) And the Mach-E? Well, it does and it doesn’t. Underneath the Mustang tribute styling and the monolithic infotainment setup, it’s also got one or two issues with premium-worthy perceived quality of the sort that have made bigger and more expensive Fords a little unconvincing so often over the years.

But, on balance, I’d still say it’s a good car; a pricey one, sure, but not much more so than bigger, more usable EVs tend to be. It gets the really important answers right, in terms of dynamics and usability, to appeal both, to owners of existing electric cars coming to Ford for the first time, and to the Ford faithful as they adopt ‘the new religion’.

For a start, the Mustang Mach-E is relatively light and well-packaged. It has been built on underpinnings adapted from those of the Focus and Kuga that Ford now calls its GE2 platform, and has a mixed-metal and composite construction. An entry-level, one-motor, rear-driven version weighs less than 1,900kg and has almost as much usable battery capacity as a Polestar 2 (from Volvo’s electrified sub-brand). With the bigger battery and extra drive motor of our test car, that kerb weight grows a bit, but it remains low by bigger EV class standards at least. 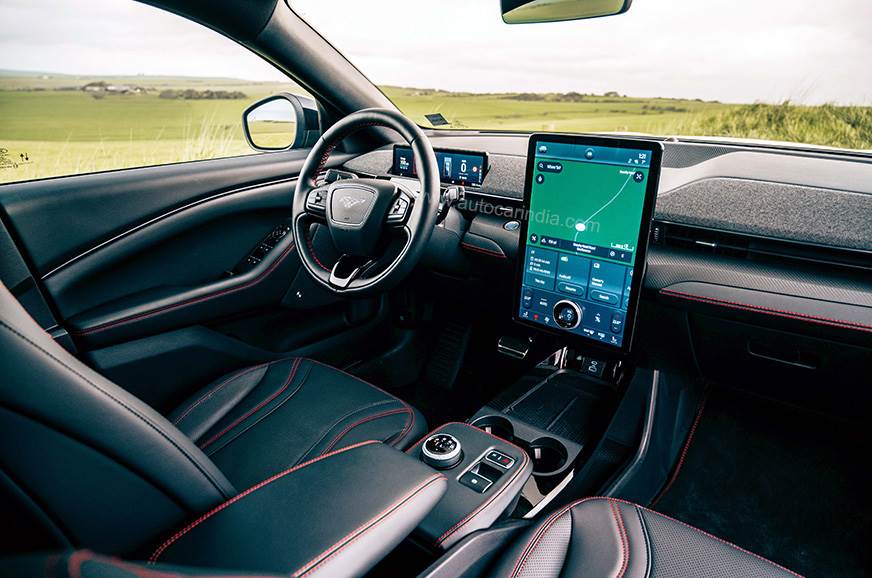 You get five usable seats and a couple of very useful boots in the car. Passenger space puts you in mind of the Jaguar I-Pace in the way it exceeds your expectations of a car that has a plunging roofline and doesn’t dominate a parking space like a taller SUV might. There’s just over 400 litres of carrying space under the window line in the back. There’s also another 81 litres under the bonnet, in a plastic storage box with a drainhole in its middle, in which you could store a dirty charging cable and one or two other items, and then clean it really easily.

The dashboard has a version of the ‘double bubble’ design made so famous by Mustangs over the years, but the interior is otherwise wholly un-Mustang-like. The majority of its switchgear is Ford parts bin stuff – Focus column stalks and steering wheel controls, for example. But don’t sigh just yet. The car’s standard on material quality really ought to be a bit better for the money. The leathers are shiny, some of the fixtures are just a little bit wobbly and very few of the materials used appeal much to the senses. But will owners care about the lack of premium lustre, given that they may be getting a bigger drive battery and better usable range than the car’s premium rivals and paying 25 percent less? They might not, you know. It’s far from a deal-breaker. 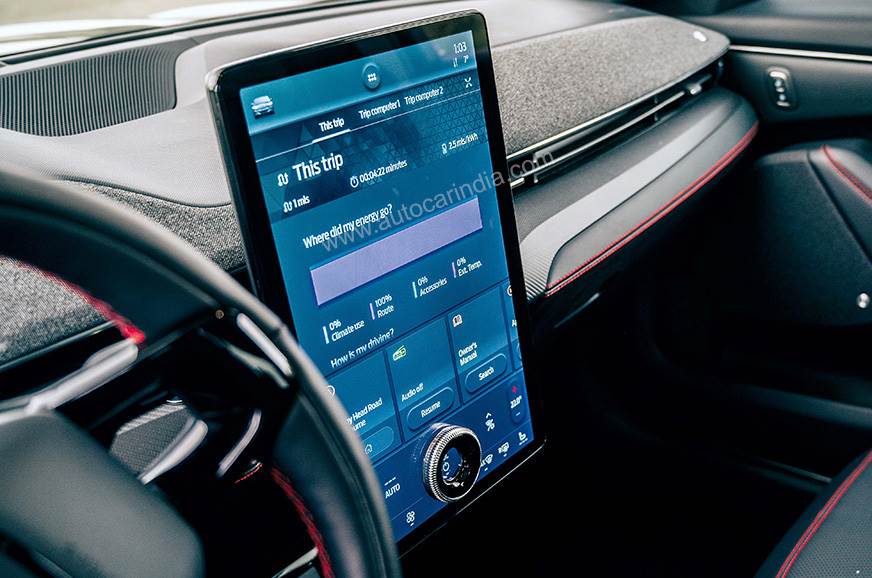 All models get a 16-inch touchscreen with cloud-connected infotainment.

There’s a smallish digital instrument screen ahead of the driver and a whopping 16-inch, portrait-oriented infotainment setup on the centre stack that comes with all grades of the car. It doesn’t quite suck up every single opportunity for a physical button, knob or switch around the interior in the way the equivalent in a Tesla seems to, mercifully. It doesn’t have a built-in web browser, either, advisably enough, although it is a fully networked system capable of wide-ranging over-the-air updates for the car, as well as fully connected navigation and entertainment. 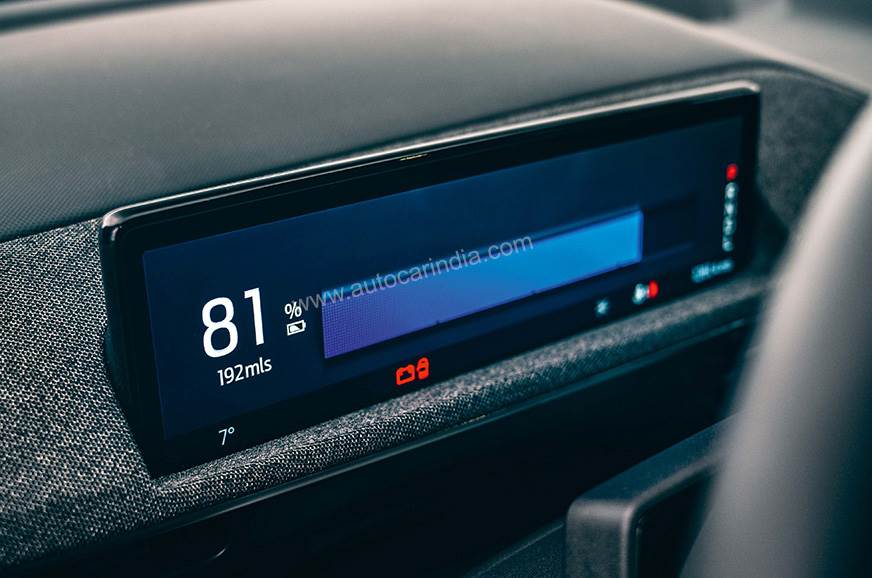 Instruments hint at an old US binnacle theme.

So is this car fun? Hmm. Well, the names for the various driving modes certainly are: Active, Whisper and Untamed (cringe). You can turn ‘one-pedal’ driving on and off, and while battery regeneration isn’t fully controllable, it certainly varies with those driving modes. The digital ‘propulsion sound’ the car plays through its speakers is also switchable and varies in its volume with those driving modes. It does, at least, sound a bit like a gently rumbling V8, rather than the Starship Enterprise; so that’s something.

Our test car was a mid-range version (the 487hp GT firecracker comes a bit later) and it had usefully brisk performance up to about 100kph. It was quick but not quite Tesla-punchy; drivable and smooth, for sure, but once you’re used to the response and the torque performance level, the powertrain offers little else to engage you, because EVs don’t.

The chassis does go a bit further than the electric breed tends to, to keep you interested, though; just a little. The car steers meatily, with little feel but consistent pace and the right kind of weight. Body control is good through corners, if a bit leaden and heavy-feeling over lumps and bumps. You wouldn’t call it agile, but the car does handle precisely and grip moderately keenly, and even in our four-wheel-drive test car there was just a suggestion of a rearward torque bias about the way it can be powered out of corners.

I don’t imagine rear-driven Mach-Es will handle like proper Mustangs. The four-wheel-drive ones certainly don’t. But there’s enough dynamic poise, bite and precision about this car that a keener driver might seek it out, in the way you might the Jaguar I-Pace over the Audi E-tron or the Mini Electric over the Peugeot e-208.

Making that choice will mean accepting one or two fairly obvious compromises about this car and – for some, I suppose – reconciling yourself with the fact that Ford had the front to put a Mustang badge on it in the first place.

But if you think about it, and you want to live in a world in which the driver’s cars we know and love are with us for as long as they can be, you might just agree that it wasn’t such a bad decision after all.

The Mustang Mach-E is one of Ford’s first global models to use its very latest Sync 4 infotainment system. The big development is that it comes with its own 4G data connection, which allows Ford to update the car’s software over the air as the car ages and gives you wider connected functionality via your smartphone and the FordPass app (which lets you use your phone as a key, pre-heat the car, manage charging times and rates remotely, etc).

The system’s cloud connectivity gives it better voice recognition and means the navigation system can be programmed remotely and be fed live information about traffic and charger availability.

The setup on our late-prototype car wasn’t quite fully operational, but it certainly represents progress for Ford on layout, usability and outright functionality.

As things stand, Ford has not officially confirmed whether the Mustang Mach-E will be launched in India. Though if the electric SUV does enter our market, it would rival the upcoming Jaguar I-Pace and Audi e-tron.