The Mercedes-AMG GT has grown from a standalone car to a range of models. We get a few quick laps in the most potent R version at the BIC. 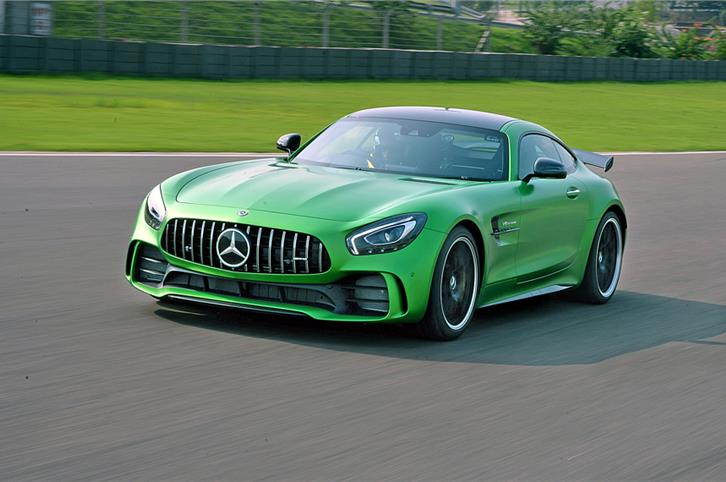 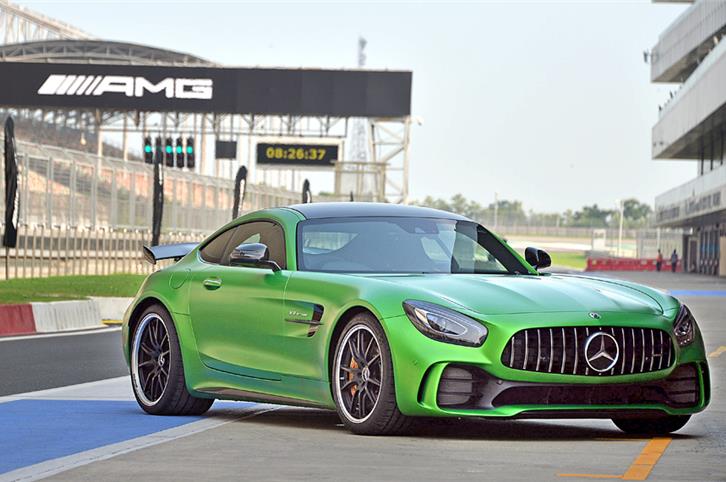 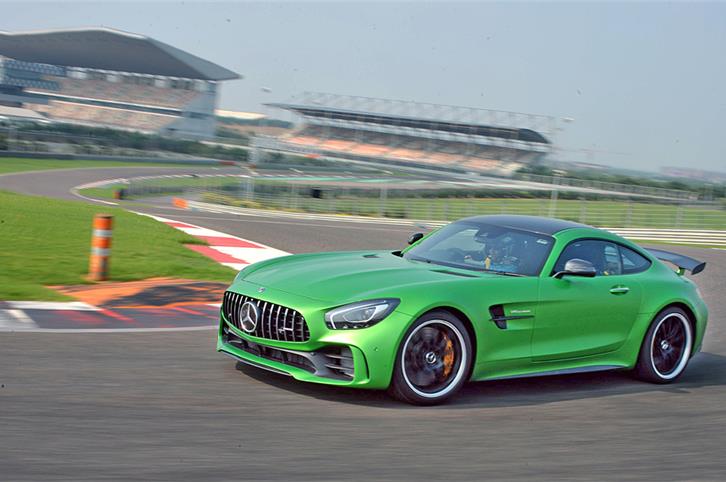 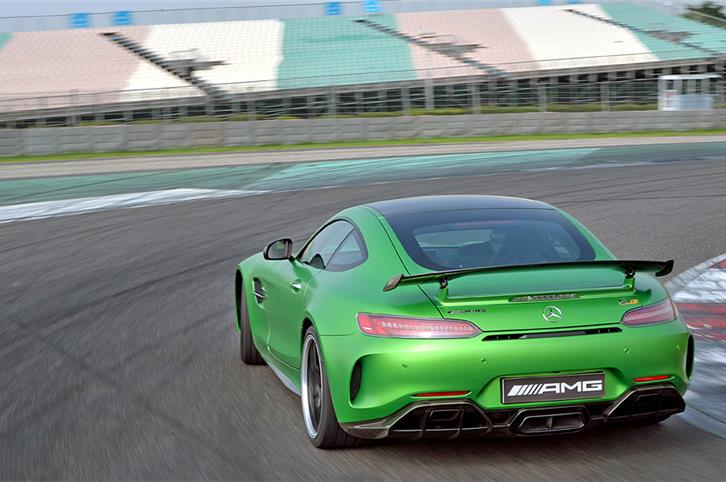 What is it?
They call it the Beast of the Green Hell, and while that makes it seem like some fabled monster pulled from the pages of a legend, what it really is, is Mercedes-AMG’s new flagship sportscar, and it’s very new indeed. Its connection to the ‘Green Hell’ – the Nürburgring – is that it holds the lap record for rear-wheel-drive production cars at that fabled track. And now, it also holds the lap record for all production cars at India’s own Buddh International Circuit, which, fittingly, is where we’re driving it.

The AMG GT is now available in four flavours globally – 476hp standard, 522hp ‘S’, 557hp ‘C’ and 585hp ‘R’, but the progression through the range is about much more than just adding power. This is especially true of the R, to the point that AMG says it’s basically a de-tuned DTM race car, rather than a jumped-up road car. Compared to the GT S coupé that’s also on sale in India, you get wider front and rear tracks, active aero flaps at the front, a carbon-fibre roof, a titanium exhaust, a huge rear diffuser, active rear-wheel steering, lightweight forged alloy wheels, optional carbon-ceramic brakes, a fixed rear wing, some ridiculously aggressive bodywork and sports traction control with (a frankly excessive) nine settings!

The new ‘Panamericana’ grille, with its vertical chrome slats, is now also standard across the GT range, as are more aggressive-looking front bumpers. The interior stays largely the same, except that it’s all black now (the only colour available), with yellow seat belts and contrast stitching, and there’s a bit more Alcantara where once was leather. You can also spec it with a roll cage, four-point seat belts, sportier seats and a fire extinguisher, but that’s really only advisable if you plan to take it to a track often.

What’s it like to drive?
And speaking of which, our time at the track is all too brief, with only three laps in which to finish all our photo and video shooting, as well as try and form a solid impression of the AMG GT R. First and foremost, it’s far more aggressive, in every possible measure. It barks to life louder than the GT S ever did, and that’s before you’ve wound the rotary dial up to Sport+ or Race mode. The 4.0-litre, twin-turbo V8 is back and now produces 585hp and 700Nm of torque, significantly more than the ‘S’, but it has to be noted that it’s not quite as much as in the new E 63 S and S 63.  Compared to the GT S, though, the R immediately feels more responsive. At 1.6 tonnes, it’s not a super-light car, but the way it rockets forward is right up there with the best super-sports cars. AMG claims a 3.6sec 0-100kph time, which on paper isn’t a whole lot faster than the S, but it certainly feels like it is. In fact, where the S had an almost gradual, muscle-car-like power delivery in all but the hairiest of its drive modes, this one feels altogether more urgent. As you build the revs, this motor barks a lot louder too, with the familiar ‘pop-pop’ on the overrun now replaced with the ‘bang’ of a hunting rifle; some of the original AMG melody is gone, but this somehow works in the more aggressive R.

Here on the wide expanse of the Buddh International Circuit, it’s still hard to test the nuances of the engine, certainly not in just three laps (one tries to go as quickly as possible), but we do get a slight sense of the AMG GT R’s handling. The wider tracks, front and rear, a far more serious aero package (including that fixed rear wing) and, crucially, rear-wheel steering, play a huge role in setting the R apart from its lesser siblings. Right at C1 you realise that turn-in is far, far sharper, to the point that the car feels a little twitchy at first. This may be a ‘front-mid-engine’ car, but the weight distribution is actually 47:53, front to rear. Up to 100kph, the rear wheels turn in the opposite direction to the fronts, while beyond that, they move in the same direction up to a maximum of 1.5 degrees. The effect is immediately noticeable. The GT S already had a sharp turn in, but the way this car’s long nose just dives into corners now is pretty spectacular.

But this is an AMG at the end of the day, so it should be a bit of a wild child too, right? Well, yes and no. Overall it feels a lot better stuck to the tarmac than the standard cars (a drive in the GT Roadster on the same track on the same day confirmed this), and just feels altogether more serious and committed to getting around a corner quickly, rather than dramatically. However, with all that torque at your disposal, you can easily push it across the threshold of the rear tyres’ traction by just hitting the accelerator a little harder. It also depends where you have the new Traction Control dial set. The yellow knob looks straight out of a racing car, with its nine LEDs that illuminate as you select a different state. The ESC has to be switched off (gulp!) for this to work, and then you choose a level that suits you. In three laps, it was impossible to dial through them all progressively, but we tried the ‘safer’ yellow zone and the ‘serious’ red zone, and found a slight difference in how the GT R exited corners, limited only by our own bravery of course.

Should I buy one?
The AMG GT now comes in three flavours in India – S coupé, Roadster and R coupé – and the best part is that they all fall within a pretty tidy price band that’s just Rs 14 lakh across. So it’s simple, right? Ignore the base S model and go for the R, the loudest, most powerful and most visually dramatic. Not quite, and although a full evaluation on the road will have to confirm this, we suspect that some might find the R a little too much for everyday use, be it the noise, the ride, the sharp throttle or even the added width. The GT S has plenty of drama as is. But as ever, there will inevitably be plenty of takers for the top dog of the range, even though most will never take the R to a racetrack. So just where on the sportscar spectrum does the AMG GT R fit? Like all rear-drive AMGs, it’s still a shouty, tail-happy animal if provoked, but this time there’s more to it than just that, provided you drive it right. The lap records are proof of that. It serves as the quickest-accelerating, most powerful version of the AMG GT range, while simultaneously being the sharpest-handling and most track-focused. Think of the Porsche 911 Turbo and GT3 RS rolled into one, and you get the picture. It’s equal parts GT and R, and at an almost reasonable Rs 2.23 crore (ex-showroom), we hope to see a number of ‘Beasts of the Green Hell’ on Indian roads.