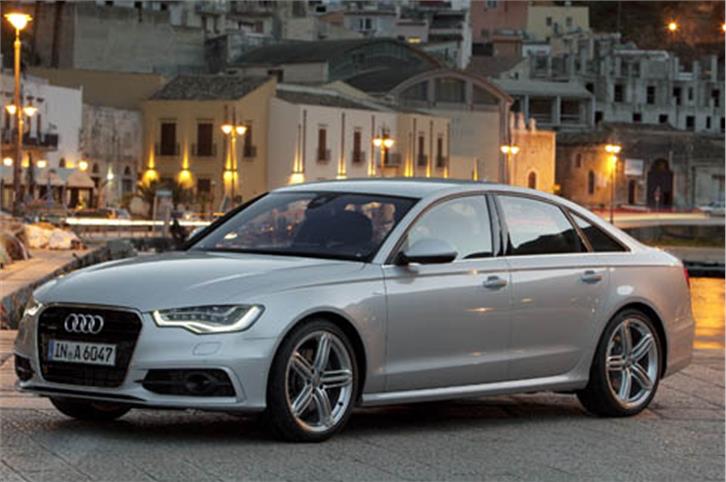 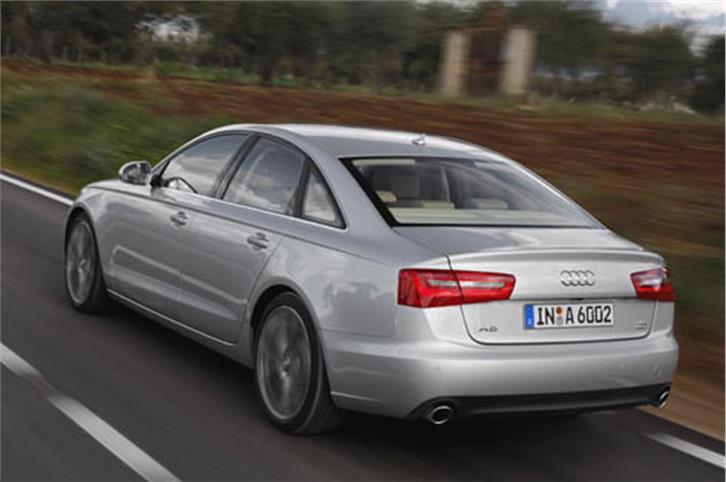 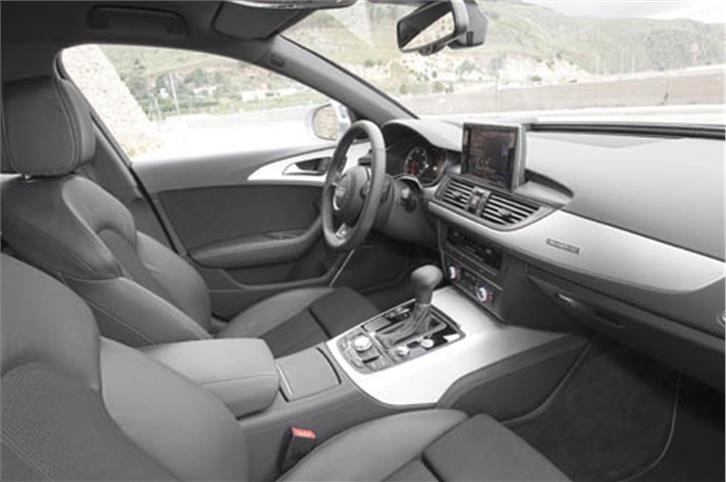 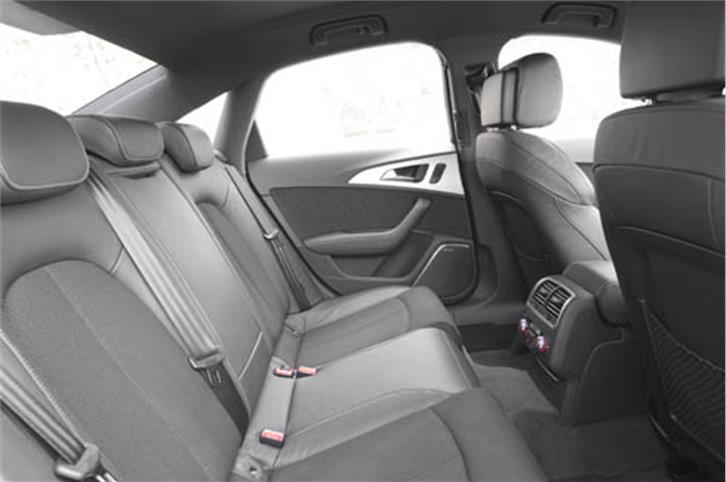 The launch of the new A6 couldn’t be timelier. The new car’s technology-packed design and brilliant detailing makes it ready to compete on equal, if not better, terms with the E-class and 5-series.

There’s a lot of the A8 in the A6’s design, like the wide grille and very distinctive LED headlights which make the A6 look like a scaled-down version of its bigger brother. Audi’s ‘less is more’ design approach, which works well in very mature markets, may fail to tickle local tastes but you can’t help but appreciate the purity of the design which exudes confidence with strong wheel arches and just two or three strong crease lines.

The A6 is slightly shorter than the outgoing model and the roofline is lower too. The reduced length has resulted in shorter overhangs but hasn’t compromised interior space which, on the contrary, has been enhanced with a wheelbase that is 69mm longer than before. Extensive use of aluminium in the body structure has made the new A6 80kg lighter on a spec-to-spec basis than the previous car, benefitting both performance and economy.

Audi’s focus on lavish interiors has made Audi cabins the last word in quality and the new A6 is no exception. The design is simply superb and is an appealing mix of curves and lines with great detailing. All shut lines are within 2mm of each other to emphasise the topnotch fit and finish throughout the cabin. The wraparound dashboard ‘blades’ is a terrific design touch and special wood veneer (a cost option) gives the interior a quality feel that no BMW or Mercedes can match.

The new A6 comes packed with tech too, a lot of which has trickled down from the A8. The latest iteration of Audi’s Multi-Media Interface (MMI) system is standard and the large high-resolution screen, which glides out of the dashboard, is very easy to read. Also very user-friendly is the wide display area between the speedo and tachometer that gives you all the information you need while driving. Options include a state-of-the-art Bang & Olufsen system, Google Earth on the navigation system (not for India yet) and high-tech systems like active lane assist, parking assist, night vision assist and adaptive cruise control.

The seats themselves are very comfortable and the Indian-spec cars will get full power adjustment for the front seats. The rear seat doesn’t feel particularly spacious by class standards though. However, Audi successfully creates an impression of space with the use of lighter materials and narrow A-pillars which improve visibility and let more light in.

The A6 will be launched in September this year with four engine options in India. The base model will be a 2-litre turbo-diesel 2.0 TDI which puts out 177bhp while a pair of petrols – a 2.8 FSI and 3.0 supercharged TFSI – develop 204bhp and 299bhp respectively.

We tested the top-of-the-range 245bhp 3.0 TDI Quatrro which will compete with the BMW 530d, Mercedes E350 diesel and Jag’s diesel XF-S. Not only is four-wheel drive standard on the range-topping A6 but so is Audi’s seven-speed, S-tronic dual-clutch automatic gearbox. This car also comes with an automatic engine start-stop system.

By omitting the traditional torque converter as used by the A6’s rivals, some compromise in the smoothness of the transmission was expected (twin-clutch units can be jerky and they are slow off the line) but except for the odd jerk, you really don’t miss the lack of torque multiplication a torque converter offers. The benefits of a twin-clutch unit, of course, are better performance and efficiency.

The torquey A6 3.0 TDI’s midrange is explosive and overtaking is an absolute breeze. You needn’t switch to manual or Sports mode and can simply leave the shifter in D, letting the surplus grunt seamlessly whisk you past traffic. Paddle-shifters behind the wheel allow for more control and were useful on the mountain sections but the sheer immediacy and responsiveness of this gearbox is its forte.

Body control is brilliant over undulating roads and at high speeds it has a poise and precision that is very reassuring. There isn’t too much driver involvement that can be derived from this chassis though. The A6’s electromechanical steering feels a touch too numb, just as in the A8, and that takes a lot away from the driving experience. But it’s ride comfort, space and refinement that really matter in India and in all these counts the A6 scores pretty well.

The best bit is that the new A6 won’t be much more expensive than the outgoing one. The base 2.0 TDI version will be the cheapest A6 yet with a starting price of well under Rs 40 lakh (ex-showroom, Delhi). BMW and Mercedes finally have a serious fight on their hands. 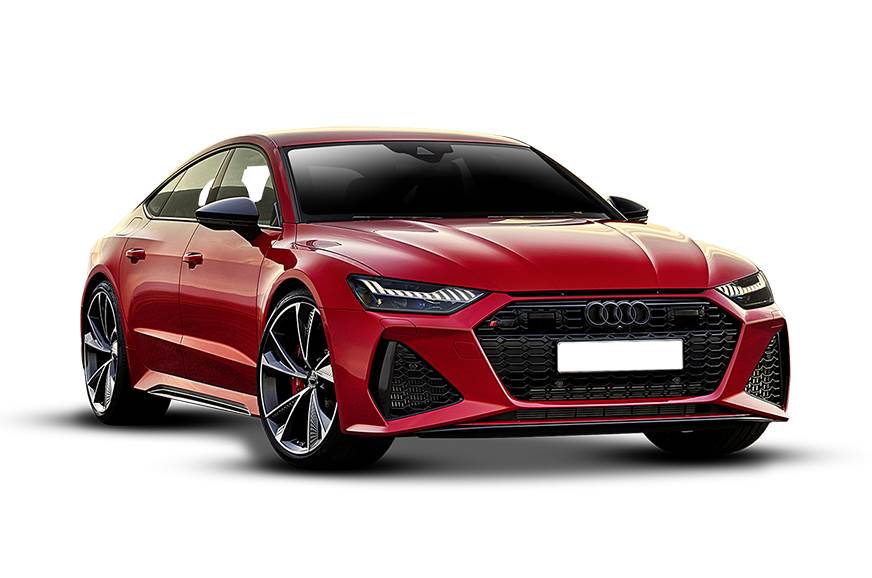 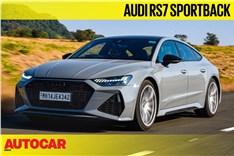 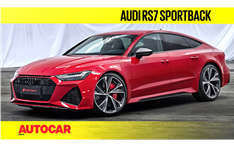