Nexon AMT to come only in the top-spec XZA+ petrol and diesel variants; will launch next month. 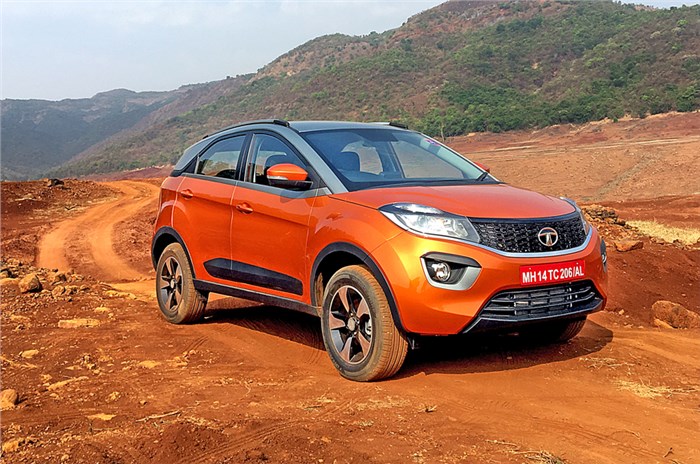 Details of the AMT-equipped Nexon have been officially revealed. For now, Tata will sell the compact SUV with the automatic transmission in only the top-spec XZA+ trims of both, the petrol and diesel models. The Nexon AMT will launch sometime early next month.

Besides the addition of the new badge on the rear, there is nothing to differentiate the automatic model from the standard Nexon. However, Tata has offered a new dual-tone, orange and silver, exterior paint shade with the new variants. Incidentally, the Nexon AMT displayed by the carmaker at the 2018 Auto Expo had the same exterior finish.

Both the 110hp, 1.2-litre turbo-petrol and the 110hp, 1.5-litre turbo-diesel engines are mated to the new six-speed automated manual transmission, which comes with a manual mode. The engines also come with the same multi-drive modes – Eco, City and Sport; the AMT's manual transmission mode automatically shifts the engine’s driving mode to Sport. In addition, the gearbox also comes with hill assist and creep functions to aid in bumper-to-bumper traffic.

The addition of the new transmission has seen the weight of the petrol model increase by a meagre 15kg, and now stands at 1,252kg. Expect a similar increase in the diesel’s weight, which currently stands at 1,305kg.

The top-spec XZA+ (automatic) variants share their kit with the XZ+ (manual) variants and are equipped with features such as projector headlamps with LED daytime running lights, 16-inch alloy wheels shod in 215/60 tyres, front fog lamps, 60:40 split folding rear seats and a Harman-sourced 6.5-inch touchscreen infotainment system that is Android Auto compatible. A wearable smart key is also on offer.

While the Nexon AMT only comes in the top-spec trim for now, based on Tata’s previous launches, a mid-spec XTA variant could be a possibility.

Unlike its rivals, the Nexon is now the only compact SUV to offer an automatic option with both, petrol and diesel engines at the moment. The current Ford EcoSport does have the option of a six-speed automatic on the petrol trim, but not on the diesel one yet. The Maruti Suzuki Vitara Brezza, another rival to the Nexon, only comes with the option of a 90hp, 1.3-litre diesel mated to a five-speed manual.

In terms of pricing, expect a premium of about Rs 50,000 over the current top-spec models – the XZ+ petrol (with the dual-tone finish) retails at Rs 9.02 lakh while the XZ+ diesel costs Rs 9.89 lakh (all-prices, ex-showroom, Delhi).