Only the sunroof-equipped Tata Harrier XT+, XZ+ and XZA+ Dark editions are available for booking henceforth. 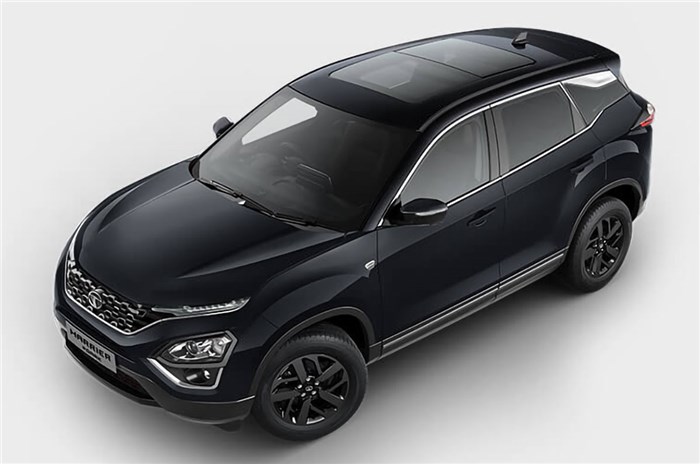 The Tata Harrier Dark Edition has received a variant update in India. The company has conveyed to the dealers that the SUV will be available in only three variants from now on.

The Harrier Dark edition has been on sale since 2019 and is one of the popular variants of Tata's flagship SUV. The model was available with as many as six variants so far – XT, XZ, XZA, XT+, XZ+ and XZA+ – with the latter three equipped with a panoramic sunroof. Now, however, the company has conveyed to its dealers to stop taking bookings of the XT, XZ and XZA variants of the Dark Edition. This means the Harrier Dark Edition will now be available with a standard-fit panoramic sunroof across all three remaining variants. Bookings for the XT+, XZ+ and XZA+ are open as usual and there are no other changes in the Harrier's equipment or features list.

The Harrier Dark edition features an all-black scheme with a new Atlas Black exterior paint shade, darkened cosmetic bits – such as the black-finished faux skid plates and grey headlamp inserts – and black finished 17-inch alloy wheels. It also wears a special badge on the front fender with the word ‘#Dark’.

On the inside, the all-black theme is carried over, with the faux-wood inserts on the dashboard replaced by a new ‘Blackstone Matrix’ insert. The interior trim bits, such as the Humanity line running across the dashboard, are now finished in gunmetal grey. In terms of upholstery, the Dark Edition gets black leatherette seats and door inserts (both have contrasting grey stitching) and a perforated black leather finish on the door handles.

The Tata Harrier has been on sale since January 2019 and is now available in 22 variants. The SUV is powered by a sole 170hp, 2.0-litre diesel engine mated to either a 6-speed manual or a 6-speed automatic. Prices for the Harrier start at Rs 14.30 lakh and go up to Rs 20.82 lakh (ex-showroom).

Tata Motors launched the new Safari earlier this year and will most likely introduce the HBX micro SUV in the Indian market in the coming months.  Read more on the Tata HBX here.