The Black Badge version produces 29hp and 50Nm more from its twin-turbocharged V12 engine, compared to the standard Ghost. 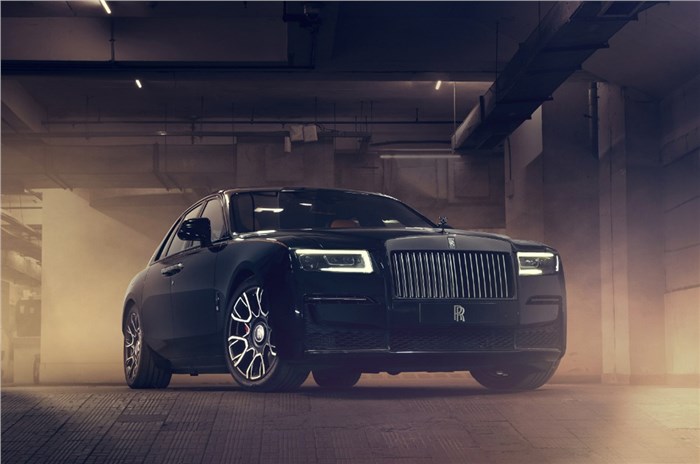 Rolls-Royce has showcased the all-new Ghost Black Badge sedan in India. The model is now available to be commissioned, with prices available on request. Based on the latest-gen Ghost sedan, the Ghost Black Badge gets more power and improved dynamics, all in the interest of making it relatively more exciting to drive.

In terms of styling, the Ghost Black Badge borrows several elements form other cars in the Black Badge series, namely the Cullinan and the now-discontinued Wraith and Dawn. As such, the features include a darker chrome shade for the exterior brightwork and grille, and a blacked-out Spirit of Ecstasy. Additionally, the version also offers a new, bespoke set of alloys with a carbon-fibre barrel.

On the inside, there are black wood veneers and technical fabrics, a more subdued tone for the interior trim, as well as a tailor-made interior clock that is flanked by a new design for the Ghost’s LED-illuminated fascia.

Like all Rolls-Royces, the Ghost Black Badge too can be customised. You can choose from over 44,000 colour options, but black remains the most popular for the series.

The changes to the series are also under the skin. The Ghost’s twin-turbo V12 now produces 600hp and 900Nm of torque, about 29hp and 50Nm more than the standard car. All this power and torque is available from as low as 1,700rpm.

The all-wheel-drive Ghost also features a ‘Low’ driving mode that enhances driving functions, including 50 percent sharper gearshifts from the 8-speed automatic and a tweaked exhaust note.

Other dynamic enhancements over the donor car include more voluminous air springs, which are designed to reduce body roll in hard cornering, a bespoke throttle map, revised tuning for the all-wheel drive and four-wheel drive steering systems, and raising of the brake pedal’s biting point while reducing its travel; although the braking system is carried over from the standard Ghost despite an increase in power.

Given its price, the Rolls-Royce Ghost Black Badge will take on the Bentley Flying Spur as its closest rival. The standard Ghost also rivals the recently launched Mercedes-Maybach S-Class, especially, the top-spec S680 version with the V12 engine.

Globally, the Black Badge series is currently available only on the Cullinan and the Ghost, with the flagship Phantom missing it. According to the brand, the Black Badge series has been crucial in reducing the average age of Rolls-Royce buyers, which has dropped from 56 years to 43 years – making it the brand to have the youngest average age of buyers in the BMW Group. Such is their popularity that Black Badge models account for about 40 percent of all Rolls-Royces sold, far greater than the 15 percent that Rolls originally envisaged.

What are some of the features you like in the Black Badge over the standard Ghost? Let us know in the comments below.