Compact SUV and compact sedan to follow Triber to reverse drop in sales. Future Duster and Captur may shift from M0 to CMF-B platform. 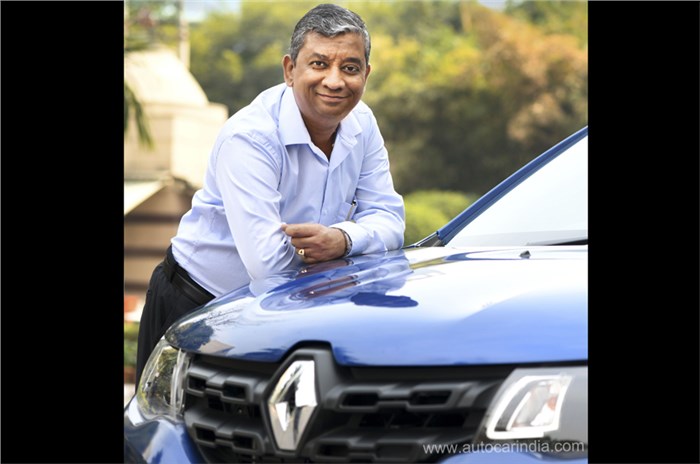 Renault India has big plans to flesh out its model range to cover a wider swathe of the Indian market in its bid to increase volumes and win back lost market share. “Today we have a Total Industry Volume (TIV) penetration of just 24 percent with the Duster, Kwid and Captur and my target is to go to 50 percent plus,” said Venkatram Mamillapalle, Renault India’s recently appointed CEO and managing director. The company’s new boss believes that filling gaps in Renault India’s model range is the key to increasing volumes and has set a target to “double volumes by 2022 to 2 lakh units.” This year, the company is aiming to cross the 1 lakh mark with the Triber added to the portfolio.

Renault (and Alliance partner Nissan too) is heavily dependent on volumes to be profitable in the Indian market. “You need to understand that the RNAIPL (Renault Nissan Automotive India Pvt Ltd) plant has a capacity of 4,80,000 and the break-even comes from there, so the most important thing for me is to fill the plant capacity. And it doesn’t help me if Nissan and Datsun don’t perform, it hits me very badly,” says Mamillapalle.

It is for this reason that most global automakers in India have shied away from high volume segments where wafer-thin margins make it very hard to be profitable. In fact, Carlos Tavares, boss of rival French carmaker PSA, calls the budget end of the market dominated by Maruti – ‘a red ocean’ which he wants to avoid.

However, Renault sees this is an opportunity. After having rattled Maruti’s cage when the Kwid was first launched in 2015, the carmaker still believes it can put up a fight on the market leader’s turf, despite a massive 41 percent drop in volumes from a peak of 1,35,123 units in FY 2017 to 79,654 units in the last financial year.

The French carmaker hopes to repeat the Kwid’s success with the upcoming Triber, whose unique body style and innovative interiors packaging promise to create a segment of its own. In its first full year of production (2020) Mamillapalle expects to sell “approximately 60,000-plus units.” The Triber will initially be launched with just one engine option – the same 1-litre BR10 petrol motor but with a slight bump up in power. A turbocharged version of the BR10 and an automatic option (most likely an AMT) will be added to the Triber range by mid-2020, which Renault hopes will further boost sales.

The company has also announced plans to launch a compact SUV (code: HBC) sometime in 2021, which again Mamillapalle says, “will be a unique offering.” This new model will also be powered by a 1.0-litre, three-cylinder turbo petrol engine. There is no diesel option planned at all, as Renault believes the market for small diesels is expected to disappear by 2023 when an even tougher level of emission regulations is expected to be implemented.

The Renault India managing director also hinted that a compact sedan (code: LBA), which the company had shelved “could be back on the table.” The LBA will also use an extended version of Renault’s CMF-A platform that debuted in the Kwid and come with similar powertrain options as in the HBC.

With both the HBC and LBA, Renault is looking at a substantial jump in volumes, which the RNAIPL plant desperately needs to be viable, especially after the disastrous launch of the Kicks. In fact Nissan too is under pressure to pitch in with capacity and the Japanese brand is planning a slew of its own products on the same platform.

Renault will introduce another update for the first-gen Duster which is sold in India. The second-gen Duster that went on sale internationally in 2017 may not make it to our shores. Renault is also considering shifting the next generation Duster for India (third-generation globally) and possibly the Captur (if volumes pick up in the short term) from the current M0 platform to the Alliance’s CMF-B platform. Again, the strategy is to maximise global economies of scale; which cannot be achieved with the M0 platform, as it serves only a handful of markets. The CMF-B is a global platform and hence offers huge export opportunities and more body styles to amortise the investment in a new platform.

Clawing back market share won’t be easy for Renault, especially when it's up against the market leader – but this is one fight the French carmaker isn’t giving up on.