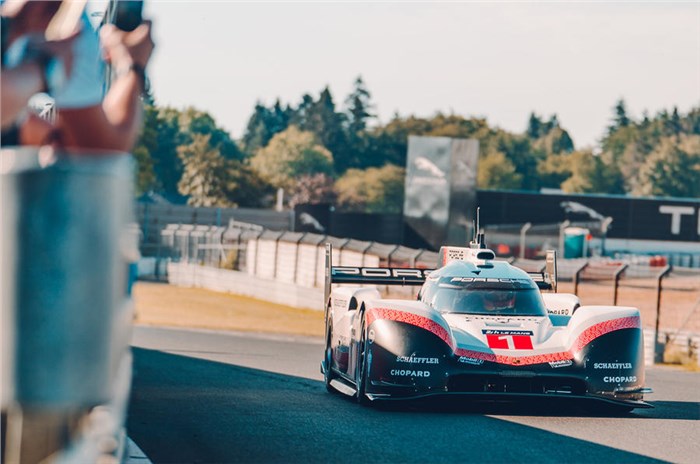 A lap time of 5min 19.545sec makes driver Timo Bernhard and the heavily modified 919 Evo Le Mans racer the fastest ever around the famed circuit; slashing the time by 51.584sec.

Earlier today, Porsche driver Timo Bernhard and a heavily modified 919 Evo Le Mans racer lapped the Nürburgring Nordschleife in 5min 19.545sec, obliterating the earlier record by 51.584sec. The previous record of 6min 11.13sec was set by Stefan Bellof, behind the wheel of a Porsche 956 Group C race car during the qualifying for the 1,000km race in 1983.

Porsche previously hinted that it will return to the 12.93-mile (20.8km) circuit for the record run after speculation swirled about the record attempt. In a tweet showing photos of 919 Evo at the circuit, Porsche said: "Well, Timo Bernhard loves that track... Perhaps he comes again."

The 919 Evo is based on Porsche’s successful Le Mans 24 Hours racer, which won the event last year before the firm withdrew from endurance racing. Porsche and Bernhard broke the record earlier today, with a time of 5min 24.375sec, but a subsequent attempt smashed the record once again.

Freed of the need to meet the class regulations, Porsche dramatically reworked the 919 for a ‘Tribute Tour’, to produce 53 percent more downforce, while reducing its weight by 39kg to 849kg. Also reworked is the hybrid powertrain – so the 2.0-litre V4 engine produces 720hp, with an extra 439hp coming from an electric motor.

As part of the Tribute Tour, Neel Jani used the 919 Hybrid to lap the Spa-Francorchamps circuit in Belgium in a record 1min 41.770secs, eclipsing the record of 1min 42.553sec set by Lewis Hamilton in his Mercedes during the qualifying for the 2017 Belgian Grand Prix.