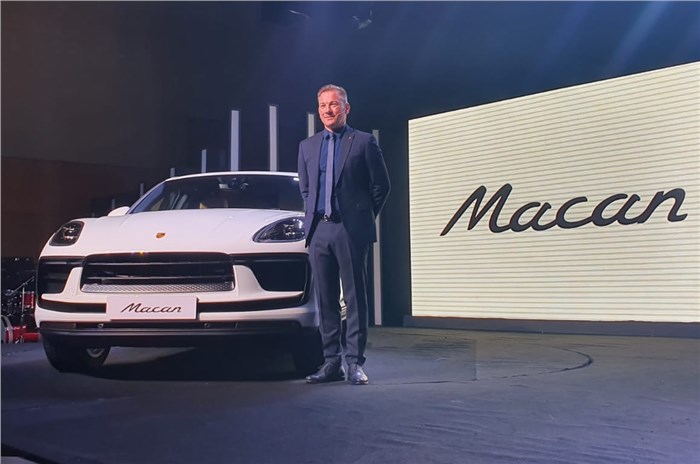 Porsche has launched the Macan facelift in India, prices for which start at Rs 83.21 lakh. The SUV comes with cosmetic and mechanical updates and is being offered in three variants – Macan, Macan S and Macan GTS. Porsche is yet to announce prices for the Macan S and Macan GTS. For reference, the outgoing Macan was priced at Rs 68.14 lakh for the base model and Rs 79.74 lakh for the S.

The updated Macan receives subtle styling changes across the line-up, including a reshaped front grille with a body-coloured inlay, a revised rear diffuser, new ‘Sport Design’ exterior mirrors, new LED headlights, and new, larger wheels. The GTS variant follows Porsche tradition in gaining an array of black, sporty trim elements and a bespoke rear diffuser. The Macan facelift can be had in 14 exterior paint shades.

The visual refresh is the most pronounced inside, however, where a redesigned centre console and control stack bring the Macan in line with its larger sibling, the Cayenne, and the newer Panamera.

Porsche has removed the physical buttons and switches that ran the length of the centre console, on both sides of the gear selector. They have been replaced by a touch-sensitive panel with illuminated haptic icons that, together with a smaller gear selector, make for a cleaner and less cluttered set-up.

A host of new personalisation options are also on offer with the SUV. The seat stitching can now be specified in a range of bright colours.

The Porsche Macan facelift will rival other sporty, luxury SUVs like the Range Rover Velar, BMW X4 and Mercedes-Benz GLC Coupe in our market.