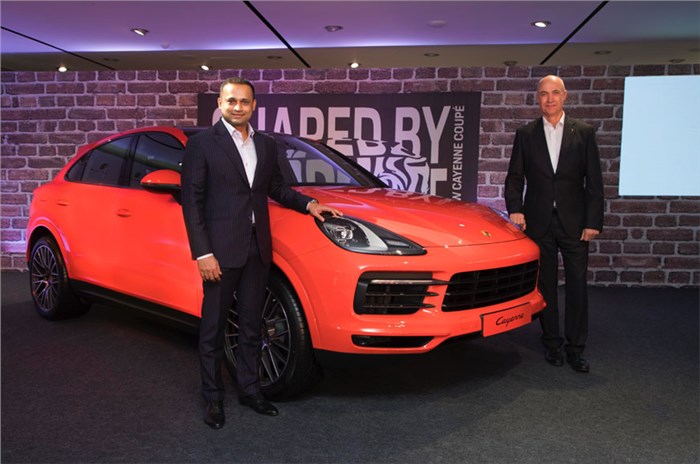 Porsche has launched the Cayenne Coupe in India, with prices starting at Rs 1.31 crore. The SUV-coupé can be had in two versions – Cayenne Coupe and Cayenne Turbo Coupe – and is brought to India as a CBU (Completely Built-up Unit).

All prices are ex-showroom, pan-India.

The standard Cayenne V6 costs Rs 1.19 crore while the Cayenne Turbo is priced at Rs 1.92 crore, making the Coupe variants pricier by around Rs 12 lakh and Rs 5 lakh, respectively.

The SUV-coupe’s styling doesn’t stray from the standard Cayenne, with both featuring the Porsche-signature four-dot LED DRLs up front and the tail-lamps that extend across the boot lid, which bears the Porsche lettering. However, the Coupe can be distinguished by its raked roofline and different 20-inch alloy wheels. The Coupe’s sloping roofline makes its 43mm shorter than the standard Cayenne; but it's 18mm wider than the regular Cayenne at the rear, and has a correspondingly widened rear track. In order to compensate for the sporty roofline, Porsche has lowered the rear seat-height for better headroom. Meanwhile, boot space is down from 745 litres to 598 litres when compared to the standard Cayenne.

Inside, Coupe variants get a familiar dashboard layout (as seen in the Panamera and the Cayenne). There’s a large, 12.3-inch touchscreen, feather-touch buttons for the air conditioner and audio controls, and the Porsche three-spoke steering wheel. The Coupe also gets an all-black interior theme with an Alcantara roofline and a panoramic glass roof.

The base Coupe is powered by a 3.0-litre turbocharged petrol V6 that puts out 340hp and 450Nm of torque while the Turbo trim gets a 4.0-litre, twin-turbo V8 that produces 550hp and 770Nm of torque. Both motors channel power to all four wheels via an 8-speed, torque-converter automatic gearbox. The top-spec Cayenne Turbo S e-Hybrid Coupe with the 680hp V8 PHEV powertrain might be introduced at a later stage.

The Cayenne Coupe rivals other sporty luxury SUVs like the Range Rover Sport, the Lamborghini Urus and the upcoming Audi Q8. 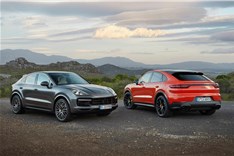 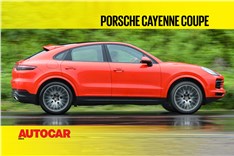 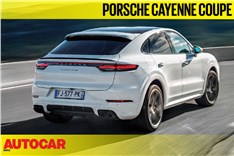