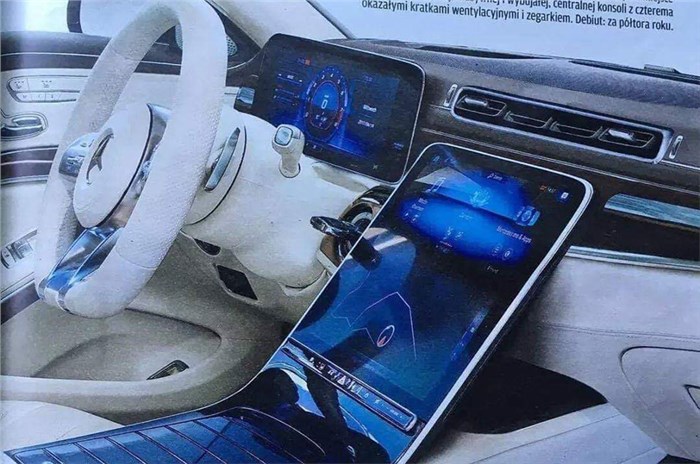 Mercedes has started testing the next generation of its flagship sedan, the S-class. Spy images of the test mule on international roads have surfaced online, and though the car has been heavily camouflaged, it still reveals a few details about the all-new model.

Starting on the outside, the styling seems to follow a more evolutionary look compared to the current-gen model. The headlamps get new LED detailing and one of the test-mules also reportedly featured door handles that sat flush with the doors. Round the back, the tail-lamps seem to stretch onto the tail-gate, in line with models like the new A-class sedan, with the rear bumper carrying forward the trend of featuring faux exhausts.

Inside, the test mule features a digital dashboard, with the centre console now dominated by a Tesla-like portrait-oriented touchscreen. As with the current generation, the instrument cluster is also all-digital; while the steering is new.

Interestingly, with the new S-class, Mercedes-Benz is expected to do away with offering the model in two different lengths, with the all-new luxury sedan expected to come in long-wheelbase form only.

Also, the new S-class will be offered in two distinctive styles. The first would be an all-electric EQ derivative – the EQ S – based on the carmaker’s new Modular Electric Architecture (MEA) platform (the first Mercedes to use it). It’s set to go make its debut at a later date and  is expected to come with a range of over 500km on a single charge. In comparison, the second style, the standard S-class, will be underpinned by Mercedes’ MRA platform and will be offered with a range of hybrid six-cylinder petrol and diesel engines, alongside a hybrid system based around AMG’s 4.0-litre V8.

In terms of technology, Mercedes is expected to offer both derivatives of the S-class with a further developed version of the current-gen model’s Airmatic+ suspension, which will work in combination with a 48V system and a camera to constantly adjust the suspension based on the road condition. Also expected are a slew of driver aids and autonomous technologies to surpass its rivals – the Audi A8 and the recently facelifted BMW 7 Series.

The all-new S-class is expected to make its debut sometime in 2020, with its all-electric sibling, the EQ S, set to go on sale in international markets sometime in 2022.