Next-gen C63 to use Mercedes-AMG’s new P3 hybrid system from the GT73e 4-Door coupe and an electric turbocharger for the 2.0-litre turbo-petrol engine. 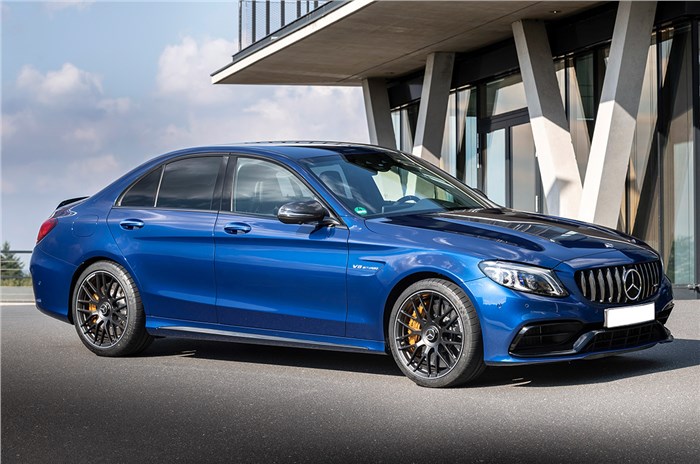 The next-gen Mercedes-AMG C63 will feature Mercedes’ new P3 plug-in hybrid system from the upcoming AMG GT73e 4-Door Coupe. The PHEV system will be paired with a turbocharged four-cylinder petrol engine under the hood of the upcoming C63e 4Matic+ EQ Power+ with power and torque figures expected to be higher than the outgoing V8-powered model.

Starting with the engine, the four-wheel-drive Audi RS4 and BMW M3 rival will use a longitudinally mounted version of the turbocharged 2.0-litre engine used by the A45 S 4Matic+, with a 48V integrated starter motor in the nine-speed AMG Speedshift MCT automatic gearbox. The electric motor from the P3 PHEV system will drive the rear axle and a battery pack under the boot floor will enable electric-only running.

This hybrid system has been developed to provide the C63e with a level of power and torque comparable with the outgoing model’s non-electrified, twin-turbocharged 4.0-litre V8. The combustion element will benefit, particularly, from an electric turbocharger similar to that used for the turbocharged 1.6-litre petrol V6 engine that powers Mercedes-AMG’s Formula 1 car.

Exact figures will be revealed later this year but AMG insiders predict outputs of around 548hp and 800Nm – increases of nearly 38hp and 100Nm over the C63 S 4Matic.

The integrated starter motor used by the new C63e is also claimed to operate in similar fashion to the unit on Mercedes-AMG’s F1 engine. In various driving modes, it acts as a generator, providing energy recuperation as well as coasting properties on a trailing throttle.

Although the new AMG model is expected to weigh up to 250kg more than the outgoing C63 S 4Matic, the additional reserves should provide it with 0-100kph acceleration of around 3.5sec, a governed 290kph top speed and drastically improved fuel consumption figures.

As with the plug-in hybrid system planned for the new GT73e 4Matic+ EQ Power+ 4-Door Coupé, the battery being conceived for next year’s C63e is claimed to support 400V recharging for fast charging at up to 100kW.

Mercedes launches for India in 2021

Mercedes has a lined up a number of new launches for the Indian market for 2021 including the likes of the second-gen GLA, the new S-class flagship limousine and the high-performance Mercedes-AMG GT Black Series. Earlier this year, the carmaker had said it had lined up 15 launches for the year with the most recent ones being the facelifted E-class and the all-new A-class Limousine.

Coming to the upcoming C63, Mercedes-AMG currently offers the car in India in its Coupe body style, so we could expect the next-gen plug-in hybrid model to arrive in India sometime after its international debut.