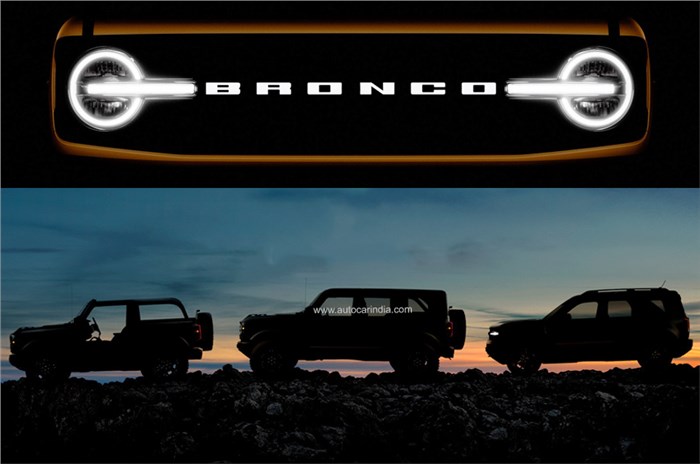 Ford has released a new teaser that provides new details on its upcoming Bronco SUV range. The Ford Bronco SUVs will premiere on July 13, 2020.

What is the Ford Bronco?

The Bronco was an iconic off-roader that was part of Ford’s line-up from 1966 to 1996. The Bronco name is being revived for a new family of SUVs. The latest teaser confirms the initial line-up will include two SUVs.

While the earlier Bronco SUV sat on a much bigger platform that also spawned popular models like the Ford F-150 truck, the upcoming Bronco range will comprise SUVs of different sizes. The smaller Bronco Sport (on the furthest right of the teaser image) will sit on the same underpinnings as the Ford Escape SUV, while the ‘standard’ Bronco SUV will be larger and will share its platform with the Ford Ranger and the Everest (sold in India as the Endeavour) SUVs. The larger Bronco will come with two body styles - a five-door hard-top as well as a two-door.

How will the Bronco SUVs look?

Both SUVs from the Bronco family get freshly styled body shells, with multiple cuts and creases and blacked-out elements that make the design look fresh, yet retro at the same time. The SUVs will feature large black grilles with bold Bronco badging (on some variants). The headlamps feature round LED daytime running lamps and horizontally placed LED turn signals that merge with the grille. Both models will feature chunky front bumpers with tow hooks.

What will power the Ford Bronco SUVs?

The smaller Bronco Sport will most likely share engines with the Escape, including a 150hp, 1.5-litre Ford EcoBoost or a 2.0-litre 250hp version of the same engine family, depending on variant. The larger Bronco of the twins will most likely come with the EcoBoost 2.3-liter turbo-four from the Ranger pickup where it delivers 270hp. Additionally, a V6 engine could also be offered as an option on higher variants. The only gearbox available on the Bronco will likely be Ford’s 10-speed automatic. Both SUVs will come with multiple off-road options as well as four-wheel drive as standard in most variants.

Will the Ford Bronco come to India?

As of now, there is no news on the new Bronco making it to India. At present, Ford is working on an all-new SUV that will share underpinnings with the next-gen Mahindra XUV500. Additionally, a future Creta-rivalling model from the Mahindra-Ford partnership is also in the making.