The month of July has new cars, SUVs lined up for almost every type of customer. Take a look. 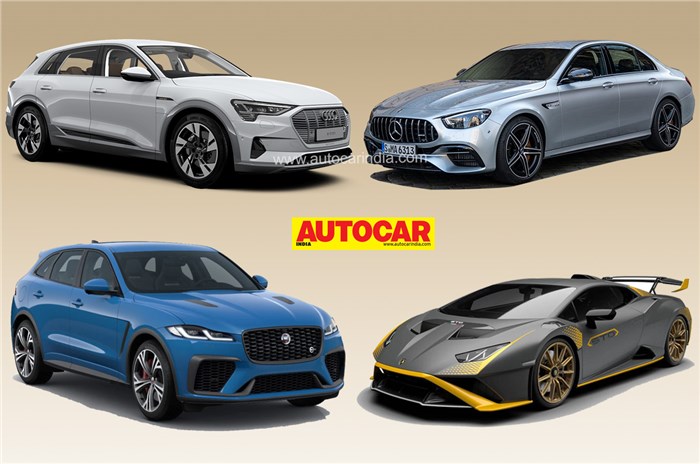 Following an action packed June in terms of new car launches, July 2021 will continue seeing a slew of new cars being launched in our market. This time, most of the launches are concentrated in the premium, luxury end of the market. Here are all the new car launches you need to watch out for in July 2021.

Following the success of the Harrier Dark Edition, Tata Motors is going to follow it up with three new Dark Edition models this month – the Altroz, Nexon and the Nexon EV. The carmaker has already been teasing the upcoming models on their social media handles. The price announcement is likely to take place on July 7, 2021. Select dealers have even started accepting unofficial bookings.

Just like the Harrier Dark Edition, the Altroz, Nexon and Nexon EV Dark Editions will boast of an all-black treatment inside and out. That includes blacked-out wheels, all-black interior upholstery, Dark Edition logos and black trim pieces all around. There will, however, be no mechanical changes to any of the cars. These Dark Edition models are expected to cost Rs 15,000-30,000 more than the standard variants. Also, there are talks that the Harrier Dark Edition could get updates too, more details will be announced on July 7, 2021.

Hot on the heels of the price announcement of the BMW M5 Competition in India, Mercedes-Benz will be launching the new E63 S in India on July 15, 2021. Mercedes-Benz will, for the first time, also launch the E 53 sedan in India as a new entry-level model in the E-Class AMG line-up. Both these models have a standard length wheelbase as opposed to the long wheelbase version of the standard E-Class in India.

Under the hood, the Mercedes-AMG E 53 is powered by a 3.0-litre, inline-6, twin-turbo petrol engine that comes coupled to a 48V mild-hybrid system. The powertrain produces 435hp and 520Nm. Meanwhile, the Mercedes-AMG E63 S will be powered by a full-blown 4.0-litre V8 twin-turbo engine that produces 612hp and 850Nm. Both versions of the AMG-spec E-Class are offered with a 9-speed automatic gearbox and Mercedes’ 4Matic+ all-wheel drive system.

The Huracan STO is rear-wheel drive only, deriving 640hp and 565Nm of torque from the screaming naturally aspirated, 5.0L V10 engine, which comes mated to a 7-speed dual-clutch automatic gearbox. This makes it the most powerful road-going rear-wheel-drive Huracan. Featuring a host of mechanical upgrades over the standard Huracan, Lamborghini claims the Huracan STO can sprint from 0-100kph in just 3.0 seconds, 0.3 seconds quicker than the Huracan RWD Coupe.

The Mahindra Bolero Neo is essentially a facelifted version of the now-discontinued TUV300 and gets multiple updates inside and out. The updated SUV comes with a brand new front fascia with sleeker headlamps and grille and re-worked front bumper. On the inside, the Bolero Neo gets new upholstery, a new steering wheel and instrument console and an arm rest for the second row seats.

Mechanically, the Bolero Neo remains unchanged from the TUV300.That means it is powered by the 1.5-litre three-cylinder diesel engine, updated to comply with the BS6 emission norms. This engine develops 100hp and 240Nm of torque, and comes mated to a 5-speed manual gearbox.

The Audi e-tron SUV and the e-tron Sportback will be Audi’s first all-electric offerings in India, joining the likes of the Jaguar I-Pace and the Mercedes-Benz EQC. The German carmaker has already commenced bookings for the e-tron SUV and Sportback, with the booking amount set at Rs 5 lakh. Both models will be launched on July 22 in India.

Both the Audi e-tron and the e-tron Sportback in their 55 Quattro configuration come with a dual-motor setup, drawing power from a 95kWh battery pack. The electric powertrain produces 360hp and 561Nm in the standard drive mode, but it also gets an additional boost function, which increases the output to 408hp and 664Nm. Both models have a WLTP claimed range of between 359-484km.

Earlier last month, Jaguar launched the F-Pace facelift in India, and now, they are going to follow it up with the performance-focused SVR version of the F-Pace. Jaguar has already opened bookings for the F-Pace SVR in India. In line with the recently launched F-Pace facelift, the SVR model gets similar exterior cosmetic upgrades and then some more, along with a heavily revised interior as well.

Under the hood, the Jaguar F-Pace SVR is powered by a 5.0-litre supercharged V8 petrol engine that produces 550hp and 700Nm (20Nm more than before). The engine comes mated to an 8-speed automatic gearbox. The F-Pace SVR gets upgrades to the suspension and steering for better driving dynamics, along with software revisions for the drive modes and recalibrated brakes.