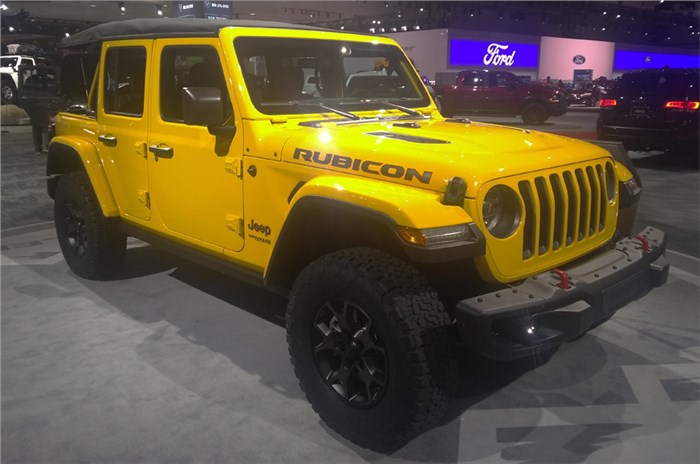 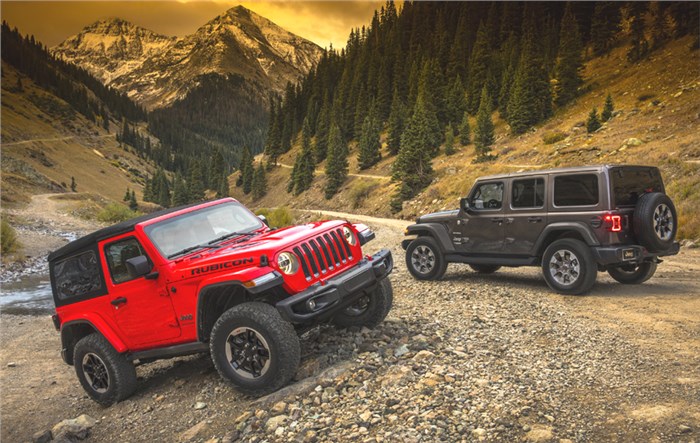 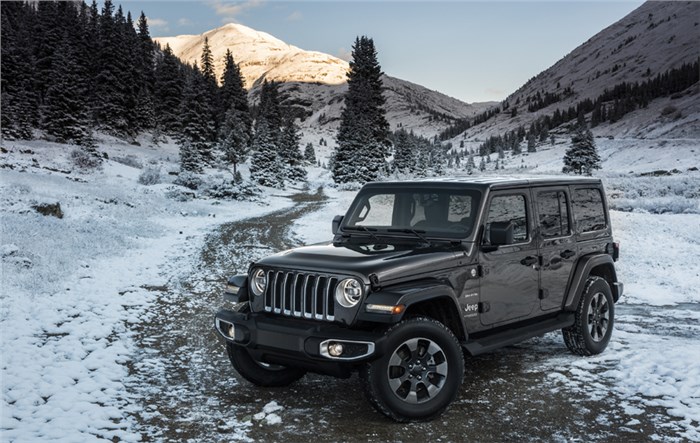 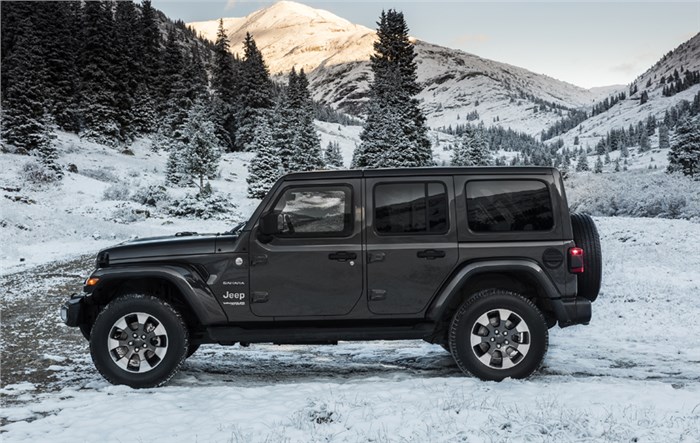 Next-gen Jeep Wrangler is larger, promises to be more refined and even more capable. Here's all you need to know.

Jeep took the wraps off the new 2018 Wrangler SUV a few days ago. The new Wrangler makes its public debut at the Los Angeles Auto show 2017. We take a closer look at the latest iteration of the iconic SUV from Jeep that will make it to our shores sometime in second half of next year.

Exterior
The new Jeep Wrangler's styling takes up where the previous-gen model left off. This means, Jeep has played it safe with the SUV's design and it still carries off the original Jeep’s DNA. Upfront, the new Wrangler's grille has been tweaked slightly with the farther-most slats now curving with the shape of the headlights, similar to the ones seen on the older Jeep CJ5 range. The SUV now features larger full-LED headlights with LED daytime running lights which are placed on the fenders. Moving on to the sides, the profile is unmistakably Wrangler, however there are subtle changes especially to the glasshouse, with the belt-line now being lower by about an inch that helped Jeep create a larger glasshouse for the new model. It now features vents just on the aft of the front fenders which according to Jeep not only provides ventilation to the engine but also helps reduce hood-vibration. At the back, the tail lamps are larger and so is the rear window with the spare-tyre placed a little lower than earlier for better rear visibility. 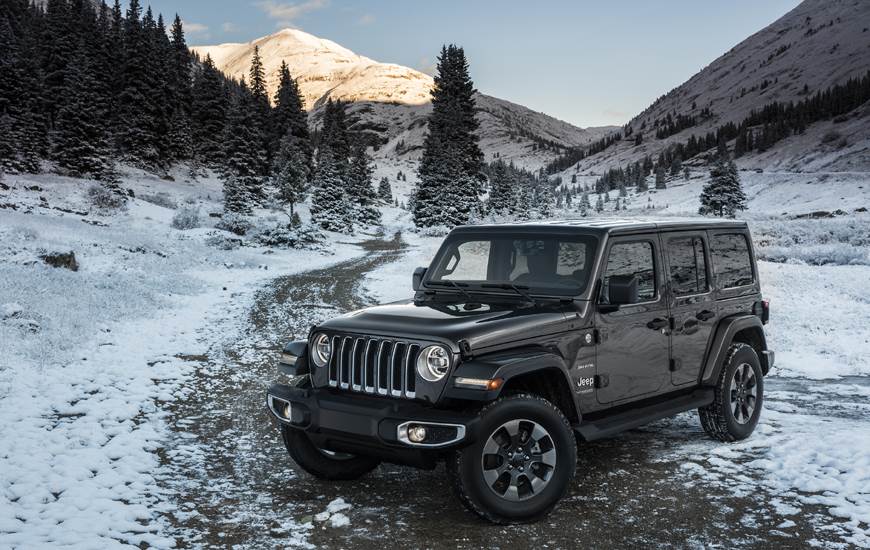 With the new Wrangler, Jeep says it has taken customer feedback seriously and has incorporated changes in the new model. "With the new Wrangler, we had to maintain a balance with the modern bits and at the same time also stick to things that were beloved on the outgoing model" says Mark Allen, head of Jeep's exterior design department. "We were thinking of going a bit more radical with the new Wrangler, but we didn't want to lose the Jeep DNA much by doing that." he adds. "We have to make sure the Wrangler attracts to someone who would take it to the Rubicon trail as well as to the customer who wants to use it as their daily driver". 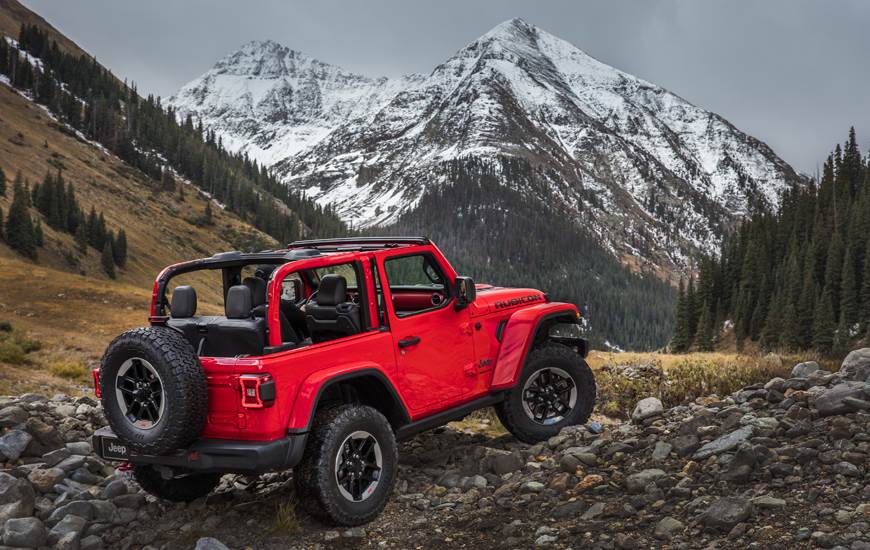 The new Wrangler continues to be offered with a fold-down windshield which according to the company is still sought after "by the purists". The new Wrangler gets unique and more user-friendly, soft- and hard-top options, which are easier to remove and retract.

Interior
The new Wrangler's interior is leagues better than the outgoing model’s, with a greater emphasis on quality. The cabin, however, retains the original Wrangler styling bits like the round air-con vents. "We wanted to respect the iconic heritage of the Wrangler. At the same time, we wanted to do something that is tasteful and carries that lineage on, and also something that is unique in its own way," says Chris Benjamin, who heads Jeep's interior design team. "The horizontality of the dashboard has been maintained and it was taken as the starting point. We added shades and textures that are more contemporary but at the same time carries the Jeep Wrangler DNA." However, the team admitted that it did face its share of challenges in order to maintain the ruggedness while adding more tech and features. "Aesthetically this instrument panel is challenging, it is not as deep at the back as the ones seen on other conventional cars and SUVs. So we had to ensure to make it look more spacious and maintain the traditional horizontal look." 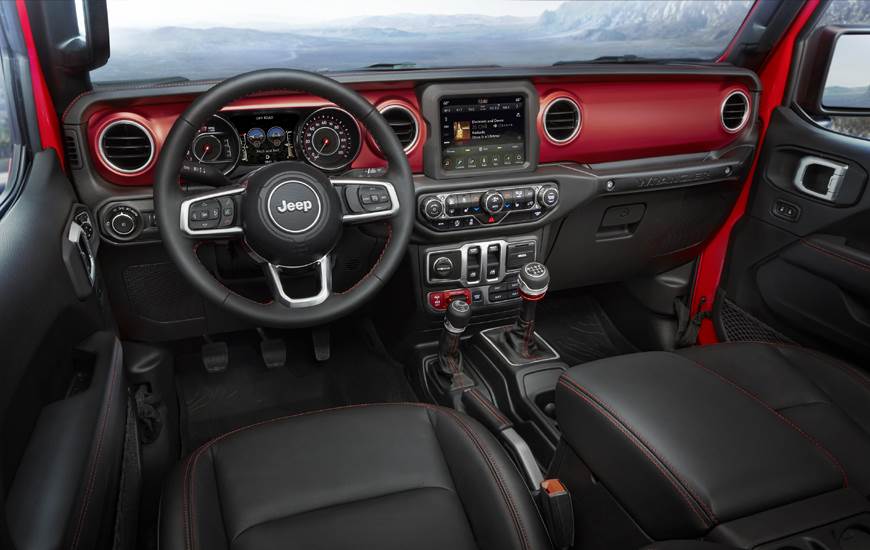 The new Wrangler also sees added length to its wheelbase and longer front and rear overhangs on the four-door model. This means, it is much bigger on the inside with more room for the front and rear passengers. The added length at the back has resulted in the rear seat moving a bit backward for additional legroom. 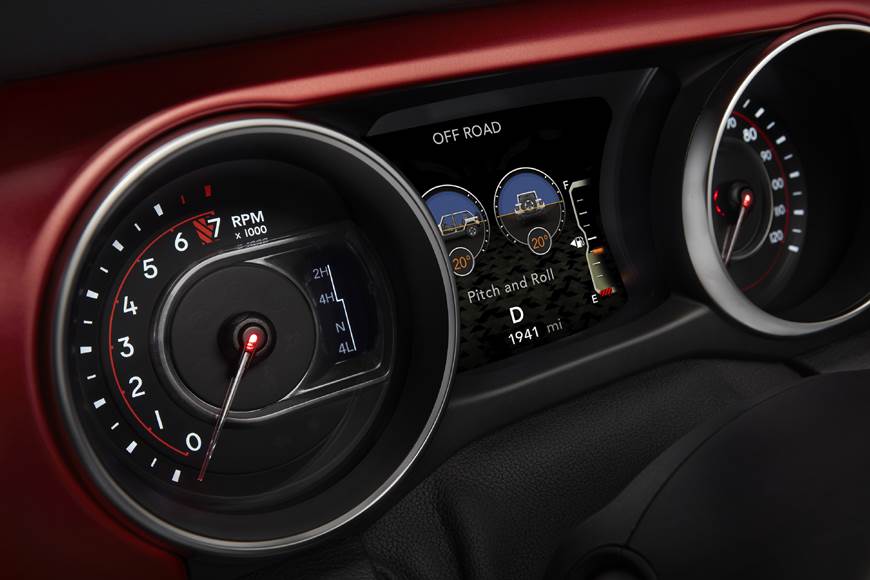 The new Wrangler's hand-wrapped leather instrument panel gets traditional speedometer and tachometer but now comes with a 7-inch multi-info display (3.5-inch on lower-spec trims). The dashboard gets soft-touch materials along with the mix of aluminium and plastic bits. The new Wrangler for the first time comes with dual-zone climate control with dedicated twin air-con vents for the second-row occupants. It is now big on storage too with the centre storage area now being around fifty percent bigger than before. The shift lever features real bolts which are also seen on the frame for the infotainment system as well. Speaking of the infotainment system, the Wrangler will come with three screen-size options with the smallest being the 5-inch one, the mid-spec trims will come with a 7-inch screen while the fully-specced variants loaded with a large 8.4-inch unit replete with features like Apple CarPlay and Android auto. There are multiple 12V sockets and USB ports scattered around the cabin. The Wrangler also gets push button start and keyless go feature on the higher trims. And aiding visibility is reverse camera mounted on the spare wheel. The Wrangler also features a model information plaque on its tailgate which is reminiscent of the earlier Jeep models.

Under the Skin
Jeep has made the new Wrangler not only more refined but also more capable than the outgoing car. It now has better breakover, approach and departure angles than the outgoing models and comes with up to 30-inches of water-fording capability. The SUV now features four separate skid plates in order to protect the fuel-tank, transfer case and the automatic transmission oil pan. Apart from using aluminium for the doors, Jeep has used the same material for the new Wrangler's engine mounts and steering gear too. As far as ride and handling goes, Jeep says it has "extensively worked" on the ride comfort and body-roll control and has achieved significant results" The SUV is now a bit more aerodynamic than before, thanks to the raked windshield and other aero improvements. The new Wrangler's drag co-efficient is around nine percent lesser than the outgoing model. l. 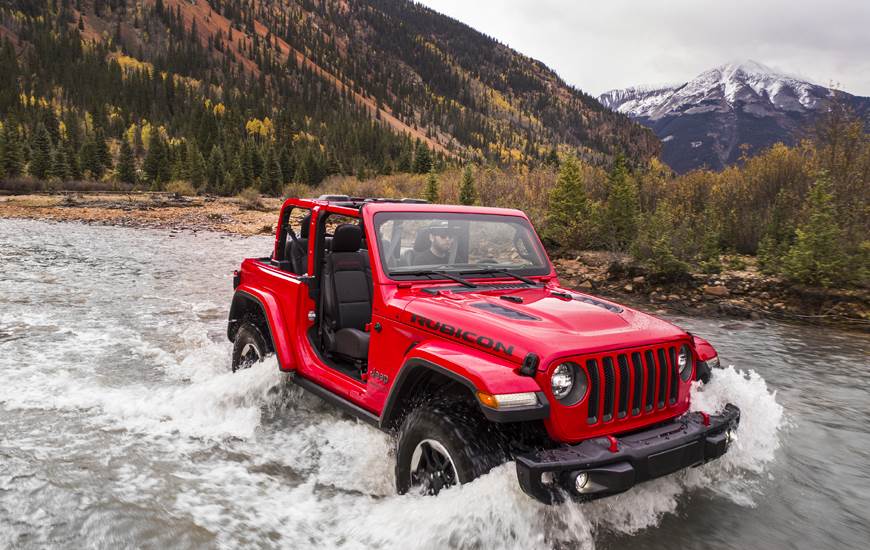 Engine and powertrain options
The new Wrangler will be available with two petrol and two diesel engine options. They are:

Out of the above four engine options, the 3.6-litre petrol will carry on as is and will now be on sale primarily for the North American market, along with the 3.0-litre V6 turbo diesel which is new to the Wrangler but is already available on the Jeep Grand Cherokee.

The Wrangler sees the addition of two four-cylinder options - a new 2.0-litre turbo-petrol and a 2.2-litre turbo-diesel - that will be aimed at international markets. It is possible the Wrangler for India could be offered with the new powertrains. The gearboxs on offer on the Wrangler will be an eight-speed automatic transmission and a six-speed manual. In pursuit of better fuel-economy, all 2018 Jeep Wrangler models will feature start-stop technology.

The new Jeep Wrangler will be continued to be manufactured at Jeep's Toledo facility in the US and will be sold in India as a fully-imported unit just like the outgoing car. The company has no plans as of now to manufacture this model at any other facility. Jeep says the outgoing model is still in great demand and will be manufactured for some more time at the same facility. The manufacturer is currently tight-lipped on India launch plans for the new Wrangler, however sources tell us that it will be safe to expect a launch around the festive season of 2018.