With all of its vehicles now being petrol-only, it’s in Maruti Suzuki's interest to show diesels don’t make financial sense, and the company has devised a cost calculator to prove its point. 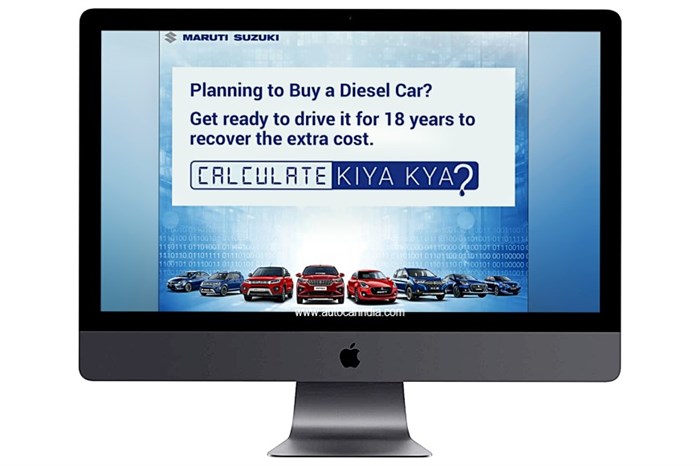 ‘Planning to buy a diesel car? Get ready to drive it for 18 years to recover the extra cost’ reads a prominent, in-your-face banner on Facebook. It’s a post from Maruti Suzuki; a creative featuring a number that will make most stop their endless scrolling and take notice.

India’s largest carmaker completed its transition to having a petrol-only portfolio at the 2020 Auto Expo, when it revealed the facelifted Vitara Brezza and S-Cross petrol. From a time when it offered a diesel engine option for most of its models, today, Maruti Suzuki - forced into a corner because of the implementation of BS6 emission norms - doesn't have a single diesel vehicle in its line-up any more. To make sure it doesn't lose any potential customers to rivals who still offer diesel vehicles, Maruti is taking pains to prove that in the BS6 era, diesel no longer is an advantage. In fact, the company has gone all out to highlight why petrol cars make for a more sensible purchase, and to achieve this, has come up with an online cost calculator.

Designed to provide potential buyers with some perspective, the online calculator lets one select their state and city of residence, choose a Maruti petrol vehicle and key in an estimate of the distance they drive every day, as well as the price and fuel efficiency of a diesel vehicle they view as an alternative, specify loan details (if they intend to take one), and then uses all that data to tell them the kilometres they’d have to cover and the time it’d take to recover the extra investment made for a diesel vehicle. In most cases, the end result generated by the calculator is an eye-opening figure, and there’s a good – and oft-ignored – reason for that, according to Shashank Srivastava, Executive Director (M&S) at Maruti Suzuki.

“We noticed a few things in our research with consumers – one, they always somehow overestimate the number of kilometres they cover. Those who would drive 1,500km in a month tend to think they’ll do 2,500km in a month. We found that over 85 percent of buyers overestimate the kilometres they run. When they actually start calculating basis their regular commutes, that’s when they realise their running is not as high as they’d originally thought,” says Srivastava.

A bid to dispel preconceived notions

A general lack of awareness among buyers about the fast-disappearing gap between petrol and diesel prices as well as fuel efficiency figures mean many don’t even consider if a diesel vehicle makes financial sense for them in the long run, Srivastava says.

“There are many who aren’t aware of the narrowing difference in prices of petrol and diesel, and we found that the consumer believed there is a huge difference in fuel efficiency between petrols and diesels, which is no longer the case. It’s psychologically ingrained in the mind of buyers – especially in regions such as Andhra Pradesh, Telangana, Punjab – that a diesel car works out to be less expensive than a petrol car anyway. With the calculator, we also wanted to highlight the difference between a petrol and diesel in BS6 era is higher than what it was in the BS4 era,” Srivastava adds.

The importance of shock value

The base price differential for a diesel vehicle is pegged at Rs 1.20 lakh on Maruti’s calculator, but it can be edited, and we gave it a try. The price difference between the top-spec Dzire manual (petrol, of course) and the top-spec Honda Amaze diesel manual is Rs 1.04 lakh (ex-showroom). And according to the calculator, it would take a buyer – who covers 35km daily – over 1.43 lakh kilometres to recover the extra investment, a process that would typically take over 11 years. Taking a loan would stretch the distance and period even further. Those with daily commutes of more than 50km would, of course, recover the extra investment sooner, but according to Maruti Suzuki’s findings, such buyers are far and few. 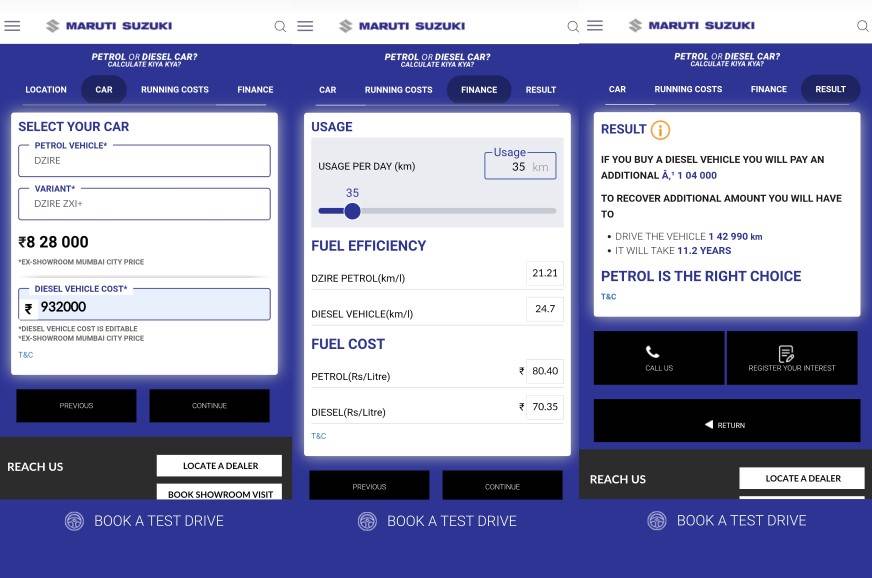 “As per our research, the average running for most customers is around 11,500km a year, which works out to about 1,000km a month. If you have to cover 2,500 to 4,000km in a month just to recover the extra money you paid for a diesel car, it doesn’t make sense,” states Srivastava.

To drive the point home, Maruti is putting compelling figures front and centre because that’s the only way to draw attention to a topic that would otherwise not be analysed.

“To change the basic psyche, we need to question people’s long-held beliefs about the acquisition cost of a diesel car, fuel prices and mileage. We need to bring their attention to that fact. When they look at the numbers, they ask: Is this really true? In some cases, the extra investment for a diesel vehicle could take up to 12 years to recover, but many may never use the same car for more than 5-6 years,” he adds.

But what Maruti Suzuki has not accounted for is the emotional connect the people of India have with diesel cars. Apart from the lower fuel price, buyers love the low-end torque that diesels provide in abundance. And the absence of a diesel engine is further accentuated by the fact that Maruti's cars only come with a naturally aspirated petrol; Maruti Suzuki does not have a turbo-petrol engine yet, which could come close to matching the punchy nature of a diesel. That said, the company realises there are people who just want a diesel car and nothing else, and is keeping the door open for a return to making diesel vehicles in segments where the demand would justify it.

“There’s a psychological, emotional connect people have with diesel engines. There are people who love diesel engines and the torque they generate and are certain they want a diesel car only. We’ll see if the demand is there and if it’s worthwhile to bring a diesel engine for larger cars. For the smaller cars, it doesn’t make sense because demand is low,” says Srivastava who has dropped the biggest hint yet that a diesel comeback for a future line of Maruti Suzuki SUVs and sedans is on the cards. What will the cost calculator say then?!

Think Maruti’s calculator could help sway demand further in favour of petrols? Let us know in the comments.

Benefits of up to Rs 55,000 on Maruti Suzuki Arena cars this month