This feature is being rolled out in India to all Android users via the latest update; there is no information as to when iOS devices will get the same. 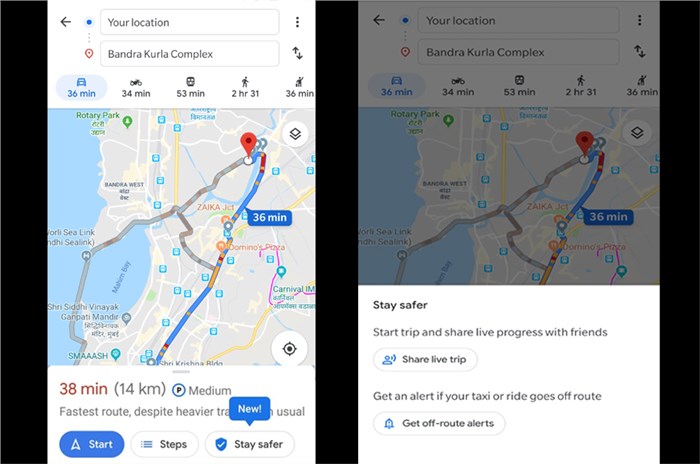 Google has introduced a new feature for its Maps application in India, called ‘Stay Safer’. The new feature has been under testing for a few months now. In essence, what this feature does is give the user two additional options when they select a route, which are ‘get off-route alerts' and ‘share live trips'. Both these options are aimed to aid users' safety while travelling by public transport such as taxis and auto-rickshaws in regions that they are unfamiliar with.

For Android users with the latest Maps application update, when they search for directions on the app, a new ‘Stay Safer’ button will visible at the bottom right side of the screen. Once the users click on the ‘Stay Safer’ button, two options will be provided to them.

The first option is called ‘share live trip' which allows users to share their live location with family and friends directly. It also allows live location sharing with popular third-party applications like Facebook and WhatsApp.

The second option is ‘get off-route alerts' which gives a prominent alert to the user if the driver strays over 0.5km from Google’s recommended route. With the alert, the user can then compare the current and recommended routes and rectify any confusion regarding the route with the driver.

As things stand, Google has already begun rolling out the ‘Stay Safer’ feature to Android users in India, although it has not yet made any announcement regarding when the feature will reach iOS devices.

In related news, Google has also recently given Android Auto a major update.

Apple CarPlay to be upgraded with iOS 13 update