From Hyryder and Scorpio N to new Brezza: Autocar India’s July 2022 issue has it all

For this month's issue, we also drive the French hatchback, the Citroen C3, and pit the new Jeep Meridian against the hardy Toyota Fortuner. 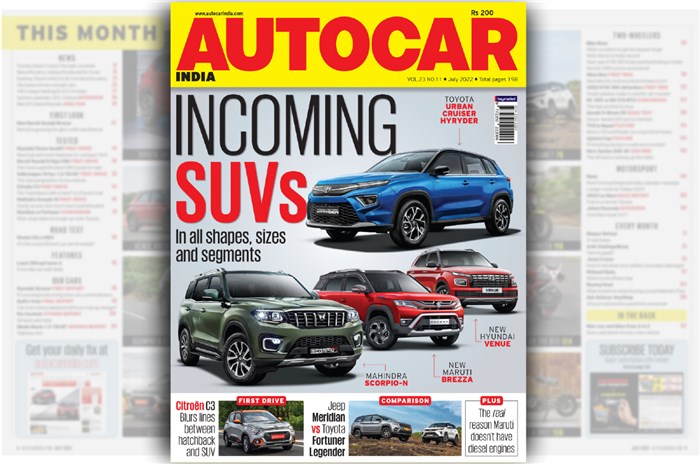 Click here to order the July 2022 issue from Amazon

Click here to order the July 2022 issue from Flipkart

In our cover story for the July 2022 issue of Autocar India, we take a close look at Toyota’s Creta rival, the Urban Cruiser Hyryder. There's also the first look of the new Maruti Suzuki Brezza and First Drives of the Citroen C3 and the new Mahindra Scorpio N. Plus, we interview Jehan Daruvala who just had his first F1 test outing. We also check out the small and quirky WW2-era Welbike.

The Hyryder is Toyota's take on the midsize SUV, and it hopes will create a dent in market leader Hyundai Creta's sales. Read this month's issue to find out more.

New tech, new safety features and new styling: Maruti Suzuki is gunning for glory with the 2022 Brezza. We take a closer look at what all has changed.

There’s a new Scorpio in town. We take the Scorpio N for a spin and see if it's worthy of the legendary moniker.

We drive Citroen's 'hatchback with a twist' – the C3. Find out if this little French car has what it takes to bring it to its rival Tata Punch.

We play in the muck with the seasoned Toyota Fortuner and the new kid on the block, the Jeep Meridian. Want to know who wins? Find out in the July 2022 issue of Autocar India.

The Oben Rorr electric motorcycle claims an impressive range and undercuts its rivals on price. We find out how it performs on its promises.

A British WW2-era, small motorbike, built with the intention of being para dropped into the battlefield for soldiers. We tell you the story of this quirky, and probably ill-suited, machine, the Welbike.

We chat with Jehan Daruvala, fresh from his first F1 testing debut with McLaren.