Oben claims massive real-world range for its Rorr electric motorcycle, while undercutting most of the competition on price. We take it out for a ride. 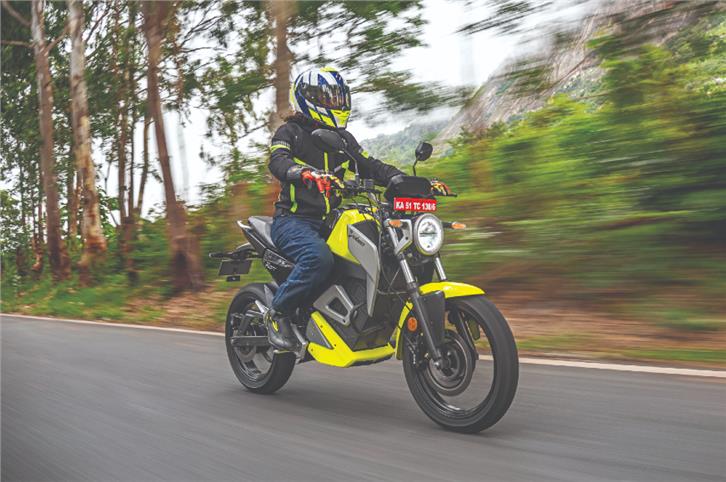 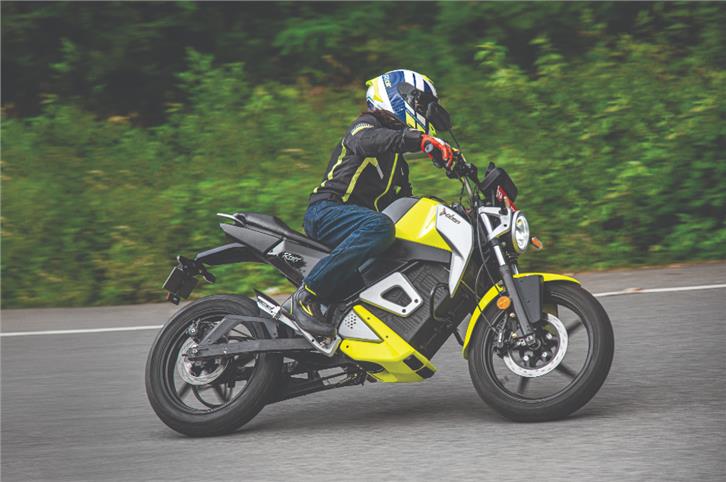 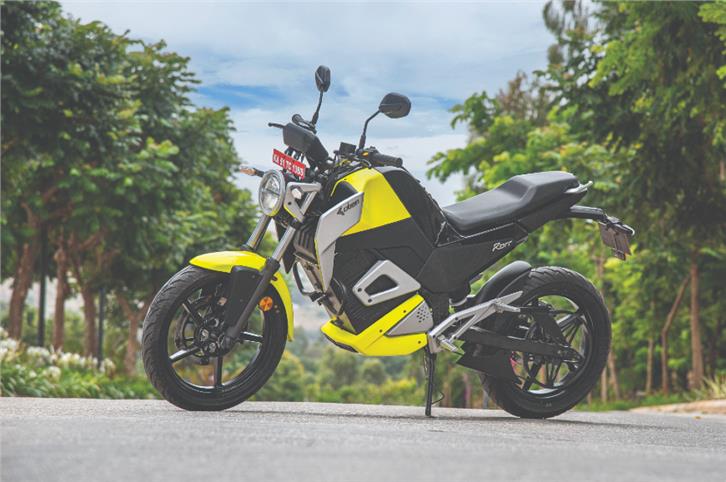 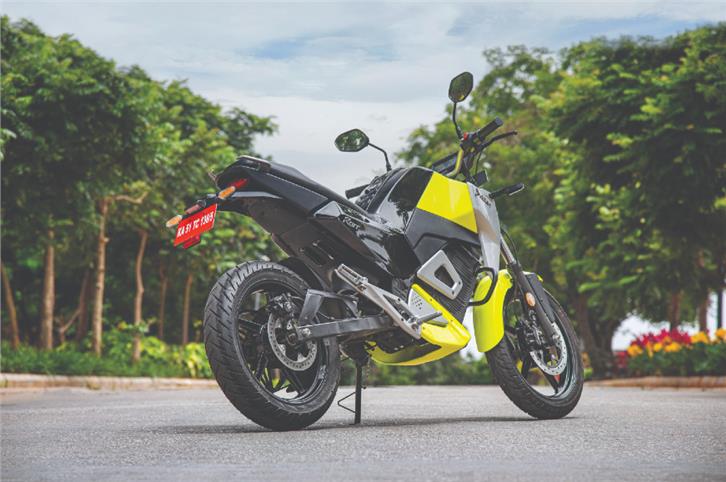 In a two-wheeler market that’s being relentlessly flooded with new EVs, it can be difficult for a new entrant to stand out. But Bengaluru-based start-up Oben Electric has managed to do just that, with its recently launched electric motorcycle, the Rorr. In our home state of Maharashtra, the bike is priced at Rs 1 lakh (ex-showroom, after central and state subsidies), making it Rs 30,000 more affordable than the Ola S1 Pro and about Rs 40,000 more affordable than both, the Ather 450X and that other recently launched e-bike, the Tork Kratos R.

Despite being priced lower than the mentioned electric two-wheelers, it manages to claim a higher range than most of them. In its lowest Eco mode, where top speed is capped at 50kph, Oben says you should get a sizeable 150km of real-world range (IDC range is quoted at 200km). It’s only the Ola S1 Pro that claims more, at 165km, in the real world, and this is only after it received an Eco mode in its recent MoveOS 2 update. Before that, its claimed real-world range was 135km in Normal mode.

The Rorr isn’t achieving its range by being some sort of slouch, either. With a peak output of 10kW from its permanent magnet motor, it’s the most powerful of all the offerings mentioned here, and in its fastest Havoc mode, it will manage a claimed 100kph top speed, while still giving 100km of real-world range, as per Oben. That’s still more than you get from the likes of the Ather 450X and Bajaj Chetak. You can see, then, why our ears pricked when we heard about this little motorcycle. We’ve now had a brief first taste of the Rorr through a small spin outside Bengaluru, and these are our findings.

Performance from the saddle is quite pleasing, and in Havoc mode, the Rorr feels like one of the quickest electric two-wheelers currently on our roads. Oben claims 3 seconds from 0 to 40kph, and acceleration is quite brisk up to about 80kph, after which it begins to trail off. But it still manages to hit (and slightly exceed) a speedo-indicated 100kph. The bike pulls quite hard even in the middle City mode, and it’s got enough performance here to keep pace with traffic. Top speed is capped at a reasonable 70kph, which makes this the ideal mode for most real-world situations. 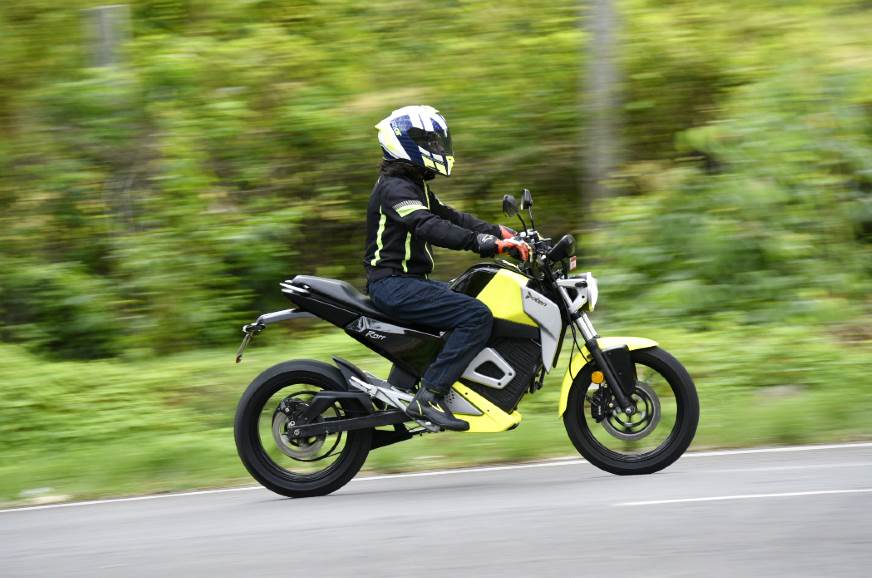 Even in the lowest Eco mode, you’re not a liability on the road – acceleration is reasonable, and you can get up to 50kph, meaning that you can realistically use this mode if you need to eke out as many kilometres as possible. This being a brief first ride, we didn’t have the opportunity to run the bike dry, but in the period we rode it, the range seemed to be depleting at the claimed rate, and the bike seemed on course to cover nearly 100km on a full charge, being ridden mostly in Havoc mode.

The secret to the Rorr’s range is quite a simple one – it packs in a massive non-removable 4.4kWh battery pack. For reference, the Tork Kratos R comes closest with a 4kWh unit, and e-scooters, with their more complex packaging constraints, have even smaller battery packs (the Ola S1 Pro manages 3.97kWh). It’s also worth noting that this is an LFP or lithium iron phosphate battery, which is a different kind of Li-ion battery that has a number of advantages (better chemical and thermal stability, to name some) and also a few shortcomings (lower energy density) compared to its traditional counterpart. 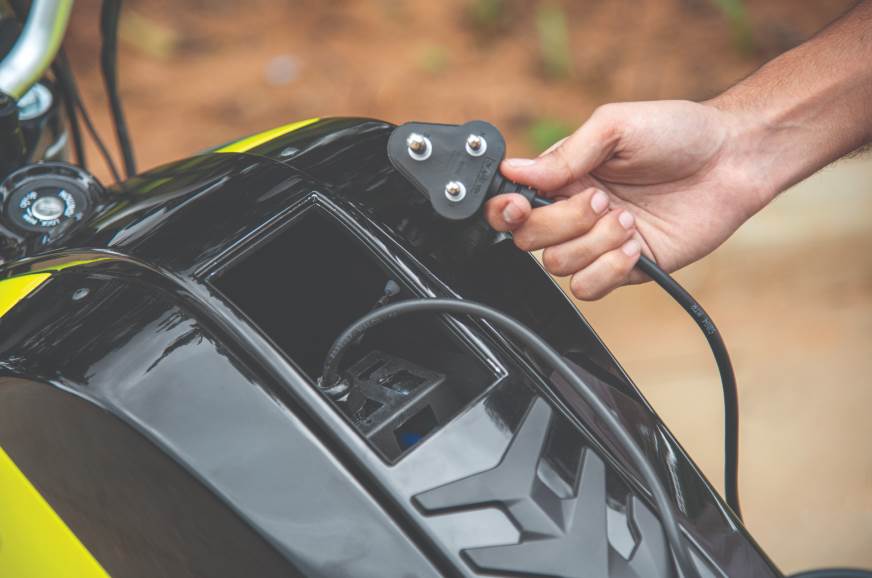 Oben will begin by selling the Rorr in nine cities across the nation, and we hope to be able to ride the bike on our home turf in Mumbai, sometime in August, and verify its range claims. Once the Rorr runs dry, it requires just 2 hours to go from empty to full, which is an especially impressive claim considering the sheer size of the battery pack. But the caveat here is that this is achieved using a 15A plug-point, and there is no way of charging the bike with a regular 5A socket. Oben will set up a 15A socket at your house at no extra charge if you buy the Rorr, but this charging limitation can become an issue if you run out of charge away from home. Fortunately, three years of roadside assistance is also part of the cost price.

While the performance levels are quite satisfying, the way it's delivered isn't quite flawless. Throttle calibration has a lot of room for improvement, and in Havoc mode, especially, it's a glaring issue. Off-on transitions are prone to extreme lurching, and inputs at the twist grip produce very disproportionate results from the motor. In many cases, just the weight of my palm resting on the grip was enough to send the bike surging forwards, and it's almost impossible to smoothly hold a steady speed in this mode.

Things are a lot better in City and Eco modes, and the throttle behaves more predictably here. But it's still not quite perfect, and there is sometimes a lag between inputs and results, which becomes especially concerning when the bike continues accelerating for a brief moment after rolling off the throttle.

On the bright side, despite being in Havoc mode for most of the time, and occasionally riding quite briskly in a hilly area, there was no real drop in performance, and the Rorr seemed to be managing battery and motor heat quite well, although the ambient temperature was rather pleasant. Once again, a final verdict on heat management can only be arrived at once we put the bike through its paces in hotter temperatures, but the initial signs are good. So that's the story with the Rorr's impressive performance numbers. Now let's examine how it has achieved the other impressive number – the price. Well, for starters, the Rorr doesn't pack in many of the fancy features that we're seeing on new electric two-wheelers these days. So, you don't get things like a TFT display, speakers, cruise control or even a reverse mode. What this bike does pack in, is a coloured negative LCD display that shows pretty basic information, along with an eSIM and app connectivity. You also get an anti-theft system and LED lighting all around. 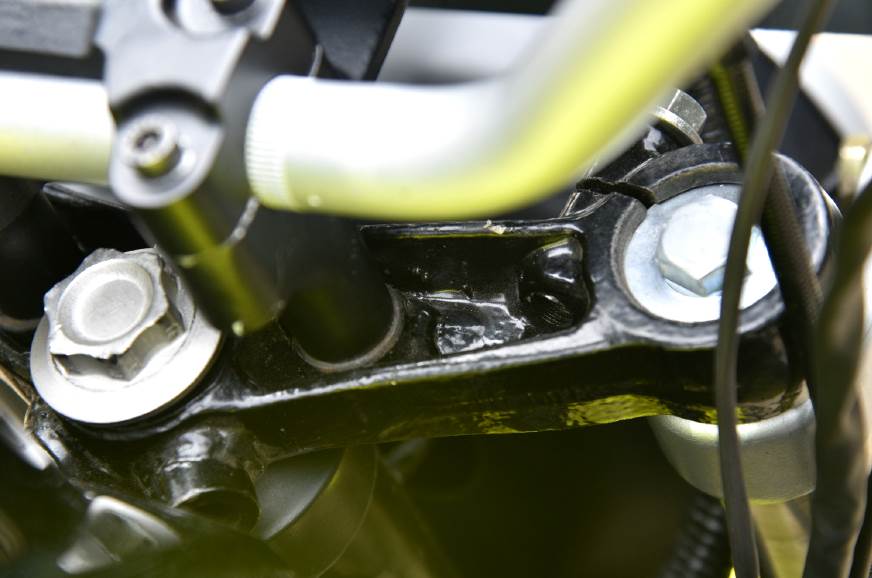 But even aside from the basic equipment levels, the Rorr comes across as quite a crude product, and not just crude compared to the other electric two-wheelers mentioned earlier, but crude for a bike that costs Rs 1 lakh or more, depending on where you buy it. There is a lot of evidence across the Rorr to tell you that it has been built to a cost. The quality of castings leaves a lot to be desired, and there are many metal components with a very rough surface finish. The switchgear and LCD display are still quite buggy and glitchy in operation. Things as simple as the horn weren't working on a number of test bikes, and the display often flickered and restarted while on the ride. And then there are just instances of poor design, the most glaring of these being some cables getting pinched against the bodywork when the handlebar is turned to full lock. Other issues include an unattractively large number of exposed bolt-heads on the ‘fuel tank’ region and the poor paint quality on some of the bodywork. 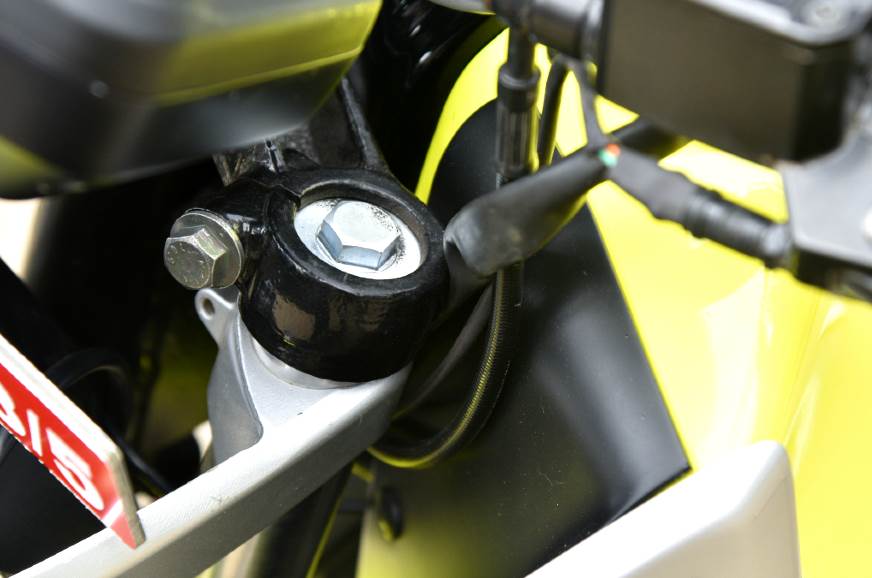 Cables get pinched between triple clamp and bodywork with handlebar fully turned.

Once you’re on the move, your attention will shift away from the poor quality levels and towards the fact that the Rorr’s chassis is quite well sorted. It’s held together by a trellis frame suspended on a telescopic fork and monoshock, and it feels quite stable and sure-footed even at its 100kph top speed.

Its behaviour around corners is natural and predictable, too, and this is a fairly sweet-handling machine, considering the performance and price points. But suspension set-up could stand to be more balanced. It’s currently on the firm side, which is great for stability and handling, but it isn’t the best at flattening out bumps and potholes at city speeds, and a lot of those imperfections come through to your backside. Considering what most people will be using this bike for, Oben would do well to soften the spring and/or damping rates. 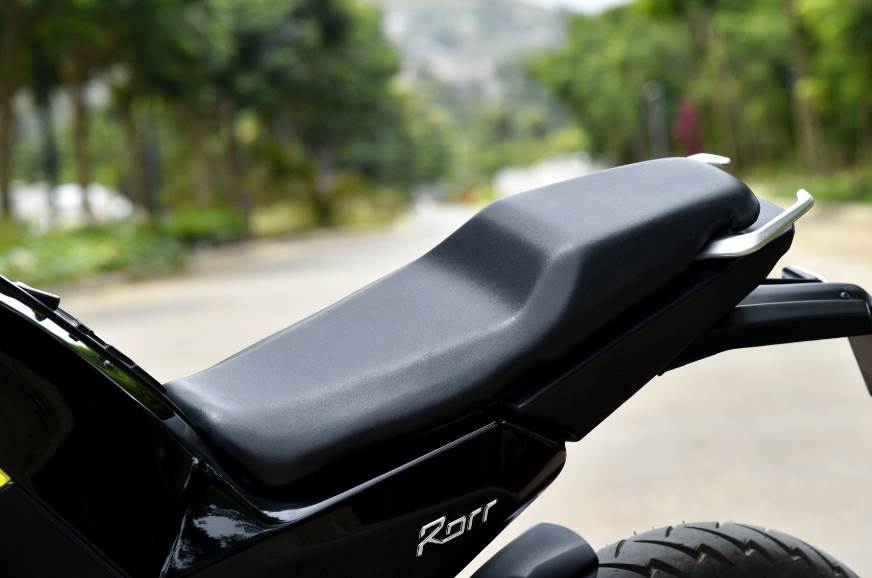 The riding position is slightly on the sporty side, with your feet tucked backwards and a little high. But it isn’t to the point where your legs will feel cramped, and it actually feels nice and involving. What is an issue is the fact that the seat is quite steeply sloped forwards and rather slippery, which keeps pushing you against the ‘fuel tank’.

Summing up the Oben Rorr is a mixed bag, with a verdict that is becoming unfortunately familiar when it comes to EVs from start-ups. This e-bike has a lot of potential because it aims to offer something that many customers seem to be asking for – a simple, no-frills, affordable electric two-wheeler with a sizeable range and usable performance. Just the basics and fundamentals. And so, the lack of too many fancy features on the Rorr isn’t a shortcoming, it’s simply what this bike is intended to be – the electric version of a slightly sporty commuter motorcycle.

What is an issue, though, is the fact that the Rorr doesn’t come across as a finished product. We confirmed with the company that the bikes we rode were indeed production-spec examples, and since this is the case, there are a number of kinks that the company needs to iron out before it hopes to begin deliveries in the festive season later this year.

The basic mechanicals of the bike seem to be in place, but there is a lot of fine-tuning and calibration to be done before it’s fit to be delivered to customers. The company has only conducted 25,000km of road testing so far and that’s nowhere near the amount racked up by most major manufacturers. If it manages to shower the Rorr with some much-needed finesse before deliveries begin, then this is a bike that should find a fair share of takers. But if it doesn’t, then the Rorr will come across as an unacceptably unpolished product, even at its competitive price point. 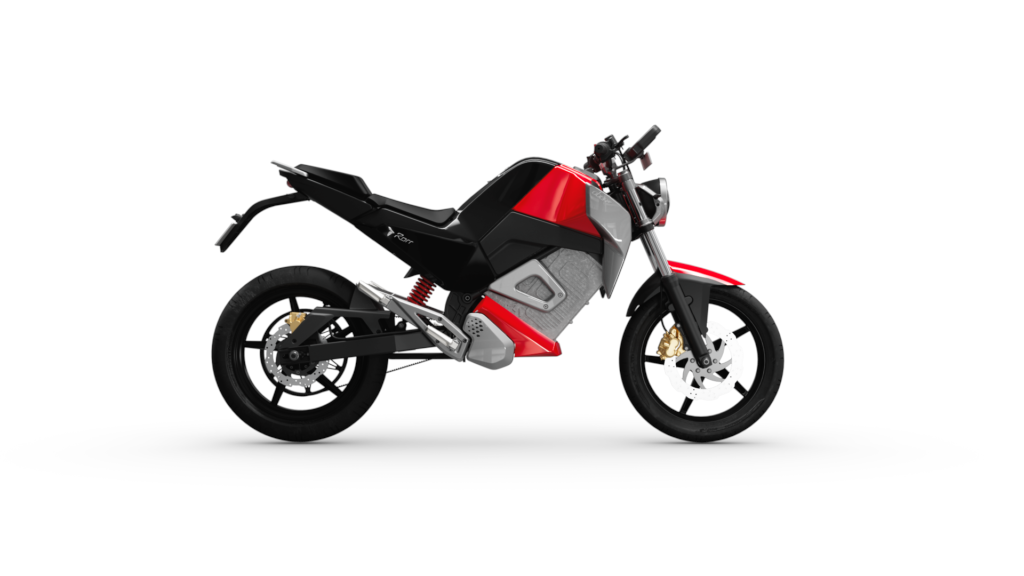 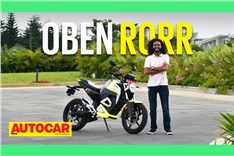