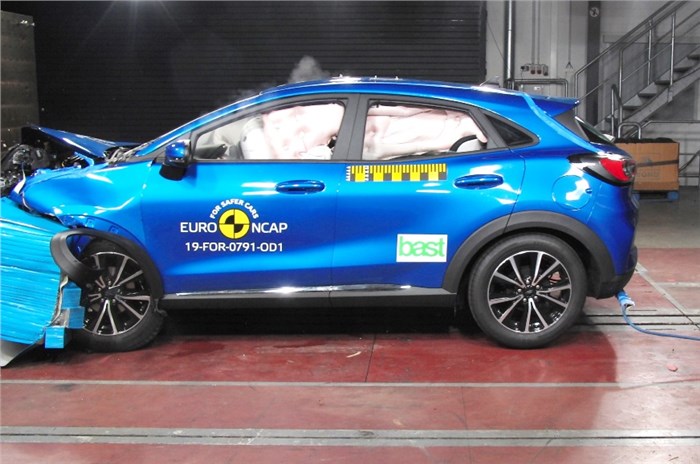 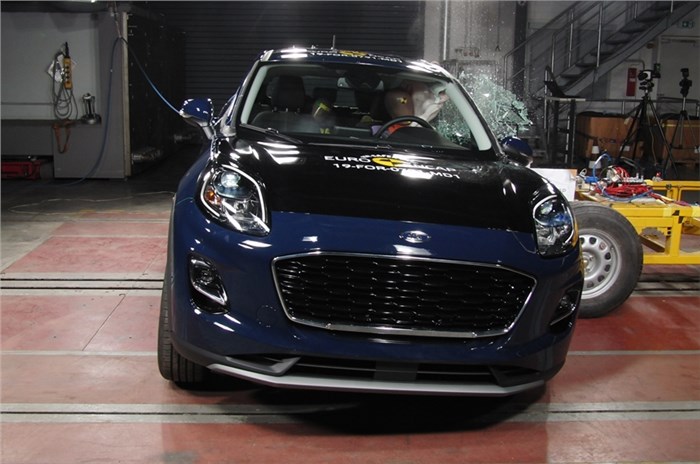 The last round of crash tests conducted by the European New Car Assessment Programme (Euro NCAP) for 2019 saw 10 cars being put through their paces. Of those, the Ford Puma managed to score the top honours with a full 5-star safety rating. Other vehicles that aced the tests include the MG ZG EV and Audi Q8, both of which will see their India debut soon. Notably, Euro NCAP has tested 55 models for the European market this year, with 45 vehicles earning a 5-star score.

The Ford Fiesta-based compact crossover got the highest rating of 94 percent (36 out of 38 points) for adult occupant protection and an 84 percent score (41.5 from 49 points) for child occupant protection in the agency’s full-width frontal, frontal-offset, side-impact and side-pole crash tests. Additionally, it was handed a 77 percent rating (37.2 points from a maximum of 48) for tests related to impact with road users, including pedestrians and cyclists, and a 74 percent score (9.7 points out of 13) for safety assist systems.

The Euro-spec Puma is fitted with dual front, side and curtain airbags (total of six) as standard. Additionally, it gets seatbelt pre-tensioners and load limiters, seatbelt reminders and Isofix child seat mounts right from the base variant. Other standard-fit safety assist systems that earned the Ford this top rating include autonomous emergency braking (AEB) for pedestrians and cyclists in city and inter-urban setups, speed assistance and lane-keeping assist.

The Ford Puma, which is positioned above the EcoSport in the brand’s global line-up, was revealed earlier this year. It is powered by a 1.0-litre EcoBoost petrol engine in two states of tune, 123hp and 152hp, and there is also a 1.5-litre diesel mill on offer. The petrol powertrains can even be had with a 48V mild hybrid setup. Transmission duties are handled by a 6-speed manual and a 7-speed dual-clutch auto gearbox.

There has been no official announcement from Ford about the Puma making it to India. However, the company has entered into a joint venture with Mahindra, one that will lead to multiple SUVs from both the brands in the coming years. This includes a Creta-rivalling mid-size Ford SUV that will also form the basis of the Mahindra XUV400. Moreover, the American automaker will also launch a C-segment SUV derived from the next-gen XUV500 that is currently in the works.